Venezuela’s Guaido and Pence agree to tighten noose on Maduro

Feb 26, 2019 7:54 AM PHT
Agence France-Presse
Facebook Twitter Copy URL
Copied
The meeting comes after 4 people were killed and hundreds injured as Guaido supporters clashed with Venezuelan security forces on the borders with Colombia and Brazil over the weekend in a thwarted bid to bring in humanitarian aid 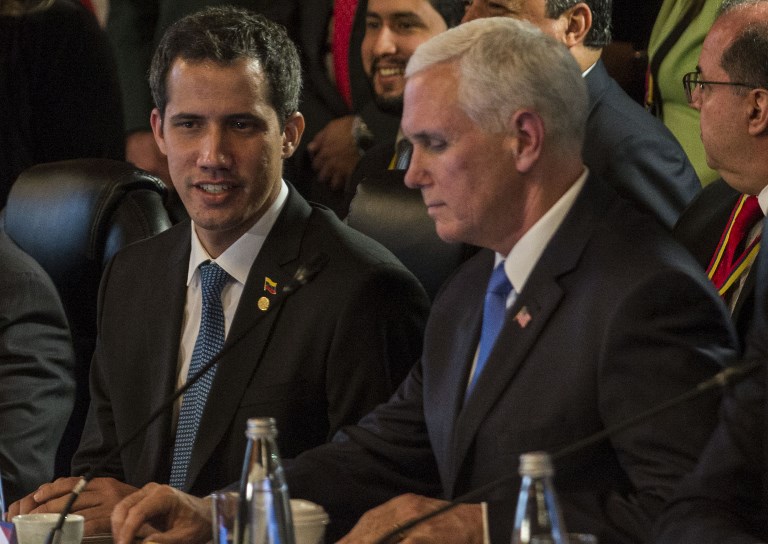 BOGOTA, Colombia – US Vice President Mike Pence and Venezuela opposition leader Juan Guaido agreed on a strategy to tighten the noose around President Nicolas Maduro following a meeting with regional allies in Colombia on Monday, February 25.

“We hope for a peaceful transition to democracy but President Trump has made it clear: all options are on the table,” said Pence, who passed on Trump’s “100%” support to Guaido.

The meeting came after four people were killed and hundreds injured as Guaido supporters clashed with Venezuelan security forces on the borders with Colombia and Brazil over the weekend in a thwarted bid to bring in humanitarian aid.

The Lima Group — made up of Latin American countries and Canada — met in Bogota and said it would ask the International Criminal Court to declare “the violence of Maduro’s criminal regime against the civilian population and the negation of access to international aide as a crime against humanity.”

Guaido warned that “indulging” Maduro “would be a threat to all of America,” while Colombia President Ivan Duque called for “more powerful and effective” pressure on the socialist leader.

However, the Lima Group rejected the use of force to achieve a democratic transition.

The US requested an urgent meeting of the UN Security Council and imposed new sanctions on the governors of 4 Venezuelan states aligned with Maduro for impeding aid shipments.

Guaido, the 35-year-old leader of Venezuela’s National Assembly, declared himself acting president in January after the opposition-controlled legislature concluded that Maduro was fraudulently re-elected.

Some 50 countries recognize him as Venezuela’s legitimate interim president.

Despite the defection of more than 150 soldiers to Guaido’s side, Maduro’s military blockade at Venezuela’s borders held firm and prevented the aid from entering.

“Not a single one of those trucks with aid got through,” Cabello said at a rally in the border town of Tachira.

Humanitarian aid has become the focal point in Guaido’s challenge to Maduro’s authority.

Venezuela is suffering a humanitarian crisis marked by shortages of food and medicine – problems exacerbated by hyperinflation, which has rendered salaries and savings worthless.

Guaido says 300,000 people face death if aid supplies are not urgently brought in, but Maduro claims it is a smokescreen to cover a US invasion.

Guaido accused Maduro’s government of turning the country into “the sanctuary of terrorists.”

“The reality in Venezuela is we have a regime that is against its people,” he said on Sunday.

“Today, we need to find a way to solve this crisis.”

At the opening of the Lima Group meeting, Colombia’s Foreign Minister Carlos Holmes Trujillo said the representatives were “trying hard to facilitate the opening of a humanitarian corridor.”

The United Nations says 2.7 million Venezuelans have fled the country since 2015.

However, the group of 14 nations is not united in its approach to the Venezuela crisis and Mexico, Costa Rica, Guyana and Saint Lucia skipped the meeting.

Guaido, though, rallied those present saying: “It’s important to recover democracy in Venezuela because those usurping power today are a threat to the continent’s stability.”

Bolivia’s President Evo Morales, a Maduro ally, called on the Lima Group to “seek a solution through dialogue.”

“In the Lima Group the consensus is that Maduro must be removed, but there is no consensus on how to do that,” political scientist Laura Gil told AFP.

Maduro seems to have won this round in the power struggle, but on Sunday, US Secretary of State Mike Pompeo said he was confident that “Maduro’s days are numbered.”

More than 300 people were injured during the clashes between security forces and protesters at crossings on the Colombian and Brazilian borders.

A 14-year-old boy was among those killed Saturday near the Brazilian border.

The European Union on Sunday condemned the government’s use of violence and armed civilians to block the aid entry, while UN Secretary-General Antonio Guterres said he was “shocked and saddened” by the civilian deaths.

There were sporadic clashes between hooded protesters and police, supported by armed civilian “colectivos” on Sunday on the Venezuelan side of the border.

Scores of Venezuelans who managed to slip across the border to get aid were trapped there as Venezuelan authorities closed it. – Rappler.com