Kim hits the road in Hanoi ahead of Trump nuclear summit 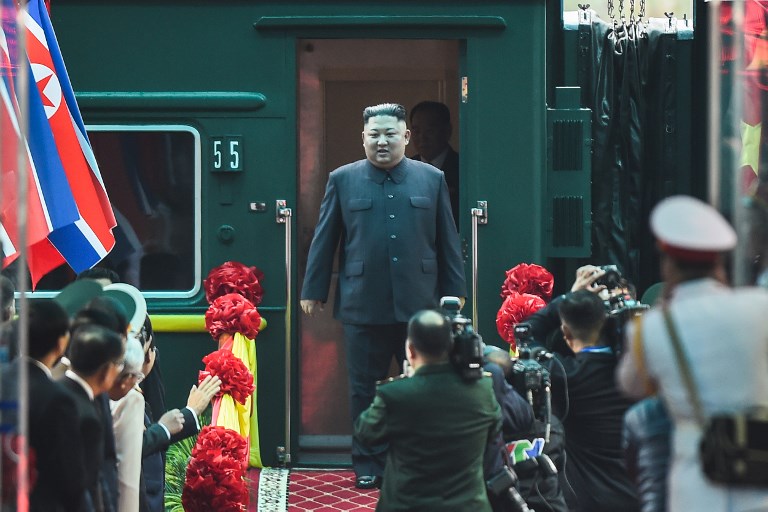 HANOI, Vietnam (3rd UPDATE) – Kim Jong-un arrived in Hanoi to throngs of cheering crowds and curious onlookers Tuesday, February 26, on the eve of a second summit with Donald Trump the world is closely watching for tangible progress over North Korea’s nuclear program.

After an initial historic meeting in Singapore in June 2018 that produced only a vague statement about denuclearization, analysts say the second date must deliver more concrete steps towards dismantling Pyongyang’s arsenal.

The normally sleepy Vietnamese border station of Dong Dang spruced itself up for Kim’s arrival after the young leader’s 4,000-kilometer (2,500-mile), two-and-a-half-day odyssey through China aboard his olive green train.

A military guard of honor in pristine white uniforms presented arms as Kim strolled down the red carpet waving and grinning, surrounded by a phalanx of aides and security personnel.

Local official Hoang Thi Thuy said she had waited in the cold rain since before dawn for a glimpse of Kim, the first North Korean leader to visit fellow one-party state Vietnam since his grandfather Kim Il-sung in 1964.

“I was so excited when we were told to stand in place for the arrival of the train,” she told Agence France-Presse. “We saw the leader from afar. I felt so happy, it’s hard to describe.”

Wearing his trademark Mao-style black suit and flanked by his troops of bodyguards, Kim was ushered into a waiting Mercedes-Benz and his motorcade rolled off towards Hanoi, where armored personnel carriers patrolled the roads amid ultra-tight security.

He was greeted in Hanoi by cheering crowds behind barriers near the colonial-era pastel yellow Hanoi Opera House before arriving at the Melia hotel where he was expected to stay this week.

After a few hours’ rest, he then departed his hotel for the North Korean embassy in Hanoi, echoing the summit in Singapore where he took in the sights on an unscheduled sortie.

Trump was taking a more conventional route on Air Force One to the meeting and was expected to arrive in Hanoi late Tuesday. He tweeted he was looking forward to a “very productive” second summit. (READ: Trump-Kim II: The summit, the script, and the sequel)

The US president again dangled the carrot of economic progress for North Korea if it gives up its nuclear program.

“With complete Denuclearization, North Korea will rapidly become an Economic Powerhouse,” tweeted Trump. “Without it, just more of the same.”

Relations between the two mercurial leaders have undergone a dramatic turnaround, from flinging personal insults and threats of destruction to Trump declaring he had fallen “in love” with Kim through an exchange of letters.

But many North Korea watchers dismissed the Singapore summit as political theatre that failed to produce a concrete roadmap to denuclearization and stressed the Hanoi meeting must deliver more.

“The window for diplomatic progress with North Korea will not remain open indefinitely. The second summit…must emphasize substance over pageantry,” said Kelsey Davenport from the Arms Control Association.

Concrete details about the summit have been thin but White House spokeswoman Sarah Sanders told reporters aboard Air Force One the two leaders would dine together Wednesday, February 27, along with close advisors.

Diplomatic progress since Singapore has stalled over the definition of denuclearization, with Stephen Biegun, the US special representative for North Korea, admitting there was no “shared agreement” of what that means.

But Pyongyang sees denuclearization more broadly, seeking an end to sanctions and what it sees as US threats – usually taken to include the American military presence in the South, and sometimes in the wider region.

In the run-up to the summit, Trump appeared to lower US demands for Pyongyang, repeatedly saying there was no rush to rid the North of its arsenal as long as missile and nuclear tests stopped.

“I don’t want to rush anybody. I just don’t want testing. As long as there’s no testing, we’re happy,” said Trump.

He also hinted more summits could follow the Hanoi meeting, reducing expectations of a dramatic breakthrough in the Vietnamese capital.

Pyongyang insists it has already taken major steps, by not testing ballistic missiles or nuclear weapons for more than a year, and blowing up the entrances to its atomic test site.

The North also wants increased security guarantees, which could come in the form of a declaration of an end to the 1950-53 Korean War – that culminated with an armistice instead of a full peace treaty – or opening liaison offices.

Opening liaison offices would signal the first stage of normalizing US-North Korean relations, said Go Myong-hyun of the Asan Institute of Policy Studies, and would be an ideal “politically symbolic step” rather than prematurely agreeing to sanctions relief.

Harry Kazianis of the Center for the National Interest said: “Nothing would be worse than for either side to come out of the meeting as if it was a waste of time.” – Rappler.com