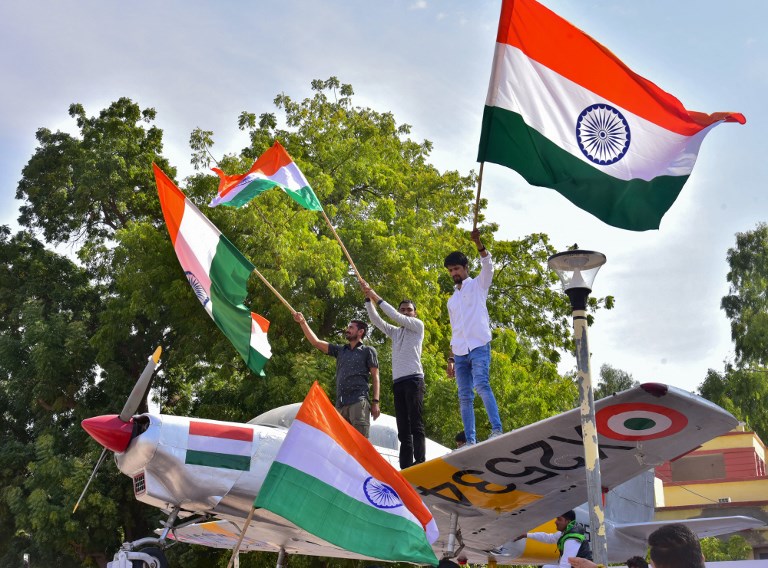 NEW DELHI, India (UPDATED) – India said Tuesday, February 26, its warplanes attacked a militant camp where Pakistan-backed fighters were preparing suicide attacks on its cities, sending tensions between the arch-rivals to a new peak.

A “very large number” of militants from the Jaish-e-Mohammad (JeM) group were killed in the nighttime attack, according to the foreign ministry, while Pakistan said its fighter jets scrambled to force the Indian jets back and that there were no casualties.

The escalation came after a February 14 suicide bombing claimed by JeM that killed 40 troops in Indian Kashmir, setting off a chain of threats and counter-warnings between the nuclear-armed neighbors.

“A very large number of Jaish-e-Mohammad terrorists, trainers, senior commanders and groups of jihadist who were being trained for fidayeen (suicide) action were eliminated,” Foreign Secretary Vijay Gokhale said.

“Credible intelligence was received that JeM was attempting another suicide terror attack in various parts of the country,” he told a press conference in New Delhi, describing the threat as “imminent.”

“Facing timely and effective response from Pakistan Air Force (the Indian jets) released payload in haste while escaping near Balakot. No casualties or damage.”

Indian aircrafts intruded from Muzafarabad sector. Facing timely and effective response from Pakistan Air Force released payload in haste while escaping which fell near Balakot. No casualties or damage.

The military spokesman also tweeted images of what he said was the Indian payload, showing what appeared to be pieces of metal and displaced soil in a heavily forested area.

India’s foreign ministry also said the camp was at Balakot, but gave no further details and the exact location of the camp remained unclear.

Balakot is in Pakistan’s northwestern Khyber-Pakhtunkhwa province, just a few kilometers from the Line of Control.

A strike in Pakistani territory outside of Kashmir would be a major escalation between the rivals, analysts said.

Beijing called on the nuclear-armed neighbors to “exercise restraint.”

“We hope that both India and Pakistan can…adopt actions that will help stabilize the situation in the region and improve mutual relations, not the other way around,” China’s foreign ministry spokesman Lu Kang said.

It was India’s first use of air strikes against Pakistan since 1971, when the two went to war.

Indian Prime Minister Narendra Modi and his Pakistan counterpart Imran Khan both summoned emergency meetings of top ministers in the hours after the attack.

New Delhi had threatened to retaliate after the February 14 bombing, the deadliest in 3 decades in Kashmir. Modi, who is expected to call an election in April, had threatened a “jaw-breaking” response.

But at a rally in Rajasthan on Tuesday, the Indian leader did not mention the strike directly. He paid tribute to the military and said: “I assure the nation that the country is in safe hands.”

Other top Indian officials said the strike displayed the country’s determination to act against Pakistan – which New Delhi accuses of using militants as proxies against it.

“They say they want India to bleed with a 1,000 cuts. We say that each time you attack us, be certain we will get back at you, harder and stronger,” said foreign affairs minister of state, Vijay Kumar Singh, a former head of the Indian army.

Singh posted a picture on Twitter of an eagle with a snake in its claws.

They say they want India to bleed with a 1000 cuts. We say that each time you attack us, be certain we will get back at you, harder and stronger. Salute the brave pilots of the @IAF_MCC that carried out the strikes. #JaiHind pic.twitter.com/3dLvr5oX0B

Pakistan’s government has denied any role in the Kashmir suicide attack. Foreign Minister Shah Mehmood Qureshi on Tuesday accused India of committing a ceasefire violation with its airstrike and said “we reserve the right to respond adequately.”

“If such actions continue, it can escalate into major conflict, which will not serve any purpose but to plunge the region into serious crisis,” he said.

It is the biggest crisis between the neighbors, who split in anger after independence in 1947, since 2016, when Pakistan-based militants attacked an Indian army camp in Kashmir that killed 19 soldiers.

In response, India launched what it called “surgical strikes” on Pakistani territory. Pakistan denied the strikes ever took place.

Kashmir has been claimed by both India and Pakistan since independence in 1947. They have fought two of their 3 wars over the Himalayan territory.

Pakistan’s interior ministry announced last week that authorities had seized control of a complex in Punjab believed to be the JeM headquarters. – Rappler.com