Trump branded a ‘conman’ as ex-lawyer savages him in U.S. Congress 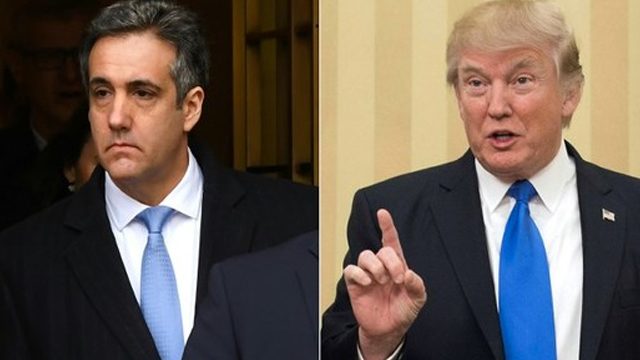 He said that Trump knew in advance in mid-2016 that WikiLeaks would publish emails stolen from rival Hillary Clinton’s campaign by the Russians.

And Cohen asserted that personal lawyers for Trump and his family reviewed and edited his written testimony to Congress in 2017 in which he lied about a Moscow real estate deal that was negotiated through the 2016 presidential election.

But Cohen’s 5 hours of testimony, at times angry and at others emotional, produced no fresh evidence that Trump or his campaign colluded with Russia during the race, or evidence of financial crimes by the president and his Trump Organization – subjects at the center of multiple federal and congressional investigations.

Instead, he drew a damning portrait of the man he worked for as personal lawyer, dealmaker and fixer for over 10 years – depicting a morally corrupt figure who forces staff to lie for him, and cares only about himself.

“Today, I am here to tell the truth about Mr. Trump,” Cohen told the nationally-televised hearing.

Cohen was sentenced in December to 3 years in prison over the hush payments and his lies to Congress – both of which he said were to protect Trump – as well as for tax evasion.

But in a striking display of remorse, the 52-year-old New Yorker, who was the president’s right-hand man at the Trump Organization, said he was ashamed of the time he worked for Trump, protecting him and concealing “illicit acts.”

He called Trump an “autocrat” who readily abuses the power of his office, and compared his operations to a mafia family.

“I did things and I acted improperly. I blindly followed his demands,” Cohen told the panel.

“My loyalty has cost me everything, my family’s happiness, my law license, my company, my livelihood, my honor, my reputation and soon my freedom. I will not sit back and allow him to do the same to the country.”

No evidence of collusion

The White House and Republicans sought to undermine Cohen’s credibility, insisting his history of lying to Congress – to which he pleaded guilty last year – made his testimony unreliable.

“Michael Cohen was one of many lawyers who represented me (unfortunately),” Trump tweeted ahead of the hearing from Hanoi, where he was enmeshed in a second nuclear summit with North Korean leader Kim Jong Un.

“He was just disbarred by the State Supreme Court for lying & fraud. He did bad things unrelated to Trump. He is lying in order to reduce his prison time.”

Michael Cohen was one of many lawyers who represented me (unfortunately). He had other clients also. He was just disbarred by the State Supreme Court for lying & fraud. He did bad things unrelated to Trump. He is lying in order to reduce his prison time. Using Crooked’s lawyer!

Cohen held his own against fiery attacks during the hearing, castigating Republicans for avoiding serious questions about Trump.

Still, on the key issue of whether Trump worked with the Russians to get elected – Cohen delivered no knock-out blow.

“Questions have been raised about whether I know of direct evidence that Mr. Trump or his campaign colluded with Russia,” he said.

“I do not, I want to be clear. But I have my suspicions.”

Cohen said Trump knew ahead of time – via the political consultant Roger Stone – that WikiLeaks would publish damaging information obtained from Russian hackers on his Democratic opponent Clinton.

He also said he believed Trump had prior knowledge of a June 2016 meeting between his campaign and a Russian lawyer peddling “dirt” on Clinton.

And he named two private lawyers working for Trump and his family – Jay Sekulow and Abbe Lowell – as having edited the false testimony on the Moscow Trump Tower project that led to Cohen’s conviction for lying to Congress.

In a later statement, Sekulow called that assertion – which appeared to implicate the lawyers in a crime – “completely false.”

All are running in parallel with the Russia meddling investigation of Special Counsel Robert Mueller, who is focused on whether the Trump campaign colluded with Moscow and whether Trump has illegally obstructed the investigation.

“Over the past two years there has not been any accountability. None,” Cummings said after the hearing.

“Basically what he (Cohen) did was to reintroduce the American people to the man he has known for 10 years.” – Rappler.com