Feb 27, 2019 6:48 PM PHT
Agence France-Presse
Facebook Twitter Copy URL
Copied
(UPDATED) In a sign of the deepening crisis, Pakistan closes its airspace 'until further notice.' At least 6 airports are shuttered in India, and a vast area north of New Delhi is closed to civilian flights. 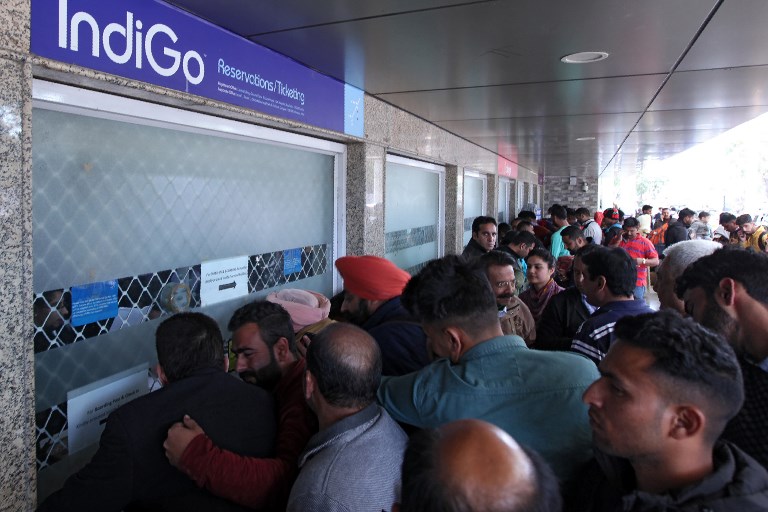 ISLAMABAD, Pakistan (UPDATED) – Pakistan and India said Wednesday, February 27, they had shot down each other’s warplanes, in a dramatically escalating confrontation that has fuelled concerns of an all-out conflict between the nuclear-armed rivals.

Calling for talks with India to defuse the situation, Pakistan Prime Minister Imran Khan warned of the potentially catastrophic consequences should “better sense” not prevail.

“Can we afford any miscalculation with the kind of weapons that we have and you have?” he said in a televised statement.

While both sides have sought to play down the threat of war, the rare aerial engagement over the divided and disputed territory of Kashmir significantly raises the stakes in a standoff sparked by a suicide attack on the Indian-controlled side earlier this month.

Pakistan initially said it downed two Indian jets in its airspace and captured two pilots, but later its military spokesman tweeted that there was “only one pilot” in Pakistani custody.

India’s foreign ministry demanded the “immediate and safe return” of the pilot, calling on Pakistan to ensure no harm comes to him.

The pilot “gives Islamabad a key bargaining chip that may affect just how muscular Delhi’s next move could be,” tweeted US analyst Michael Kugelman.

New Delhi also confirmed the loss of one of its planes and said it had shot down a Pakistani fighter jet.

In a sign of the deepening crisis, Pakistan closed its airspace “until further notice.” At least 6 airports were shuttered in India, and a vast area north of New Delhi was closed to civilian flights.

“We do not want to go towards war,” Pakistan’s military spokesman Major General Asif Ghafoor told a press conference.

Ghafoor said the jets had been shot down after Pakistani planes earlier flew across the Line of Control, the de facto border in Kashmir, to the Indian side in a show of strength, hitting non-military targets including supply depots.

Afterwards, he said, the two Indian planes crossed the LoC into Pakistani airspace. One fell into Pakistani-held Kashmir, while the second crashed on the other side, he said.

He denied initial reports that a Pakistan plane had been shot down, saying accounts an F-16 had been lost were incorrect.

Later, Indian foreign ministry spokesman Rajeesh Kumar said a Pakistani jet was hit as it took part in an operation “to target military installations on the Indian side.”

He said the Indian plane flown by the captured pilot – a Mig-21 – was lost in that operation.

It shows a blindfolded man in an Indian Air Force uniform, his face bloodied, with his hands tied behind him, giving his name, rank and serial number as a soldier interrogates him.

The military later released a second video showing the man without a blindfold and drinking a cup of tea.

The incidents are the latest in a dangerous sequence of events between the two countries, whose ties have been under intense strain since the February 14 suicide bombing in Indian Kashmir that killed 40 troops.

New Delhi had promised to act, and on Tuesday, February 26, its warplanes flew into Pakistani airspace and struck what it said was a camp of Jaish-e-Mohammed (JeM), the militant group that claimed the Kashmir bombing.

It was India’s first air strike on Pakistani soil since the neighbors fought a war in 1971 – when neither had nuclear weapons.

Islamabad, while denying the Indian strike caused any major damage or casualties, quickly vowed to retaliate, fuelling fears of a disastrous confrontation in South Asia.

Earlier Wednesday, India’s foreign minister sought to ease the situation by downplaying Tuesday’s strike, repeating Indian claims that it had been a pre-emptive attack on JeM.

“India does not wish to see further escalation of this situation,” Sushma Swaraj said during a visit to China.

The US, along with China, Britain, Germany and the European Union, have called for cooler heads to prevail.

“We encourage India and Pakistan to…avoid escalation at any cost,” US Secretary of State Mike Pompeo said.

China Wednesday again urged the two sides to “exercise restraint.” Britain said it was “deeply concerned” and working with partners including the UN Security Council to defuse tensions.

The confrontation represents the first major foreign policy crisis for Pakistan’s leader, who is believed to be close to the powerful military and who came to power last year vowing to seek dialogue with New Delhi.

Pakistan has denied involvement in the Kashmir bombing on February 14.

While India has consistently accused its neighbor of supporting extremist groups, Pakistan has equally vehemently denied any role in attacks in India and its only Muslim-majority state, Kashmir.

The Himalayan region has been divided between India and Pakistan since independence in 1947. They have fought two of their 3 wars over the territory.

Previously, the US and other members of the international community have acted to defuse tensions.

“If I were Washington, I’d be in overdrive making phone calls and signalling that it wants tensions to be de-escalated now,” said Moeed Yusuf, an expert at the US Institute of Peace in Washington.

“The risks of letting this play out are too great.” – Rappler.com