UK’s May to seek MPs’ approval for new Brexit strategy

Feb 27, 2019 7:37 PM PHT
Agence France-Presse
Facebook Twitter Copy URL
Copied
(UPDATED) The embattled leader will ask lawmakers to approve a 3-step plan that would give her more time to rework a draft deal struck with the European Union more than 3 months ago 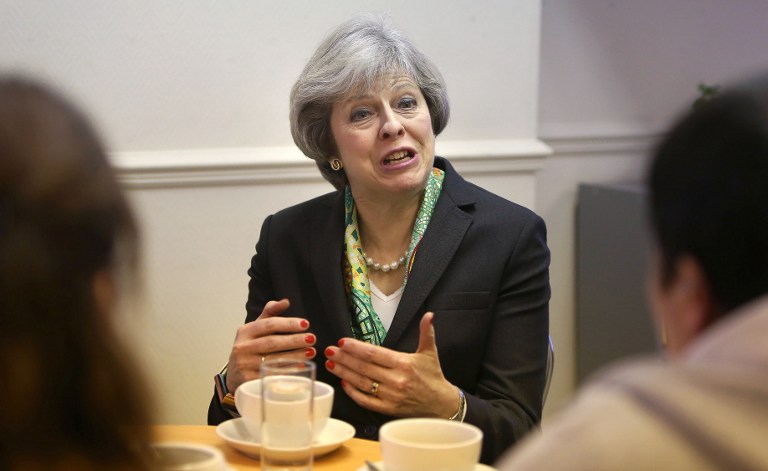 LONDON, United Kingdom (UPDATED) – British MPs will on Wednesday, February 27, give their verdict on Prime Minister Theresa May’s newly revised plan for leaving the EU, which raises the possibility of delaying Brexit.

She will ask lawmakers to approve a 3-step plan unveiled Tuesday, February 26, that would give her more time to rework a deal struck with the European Union last year.

May has said that if she fails to secure the changes needed to win their support, MPs would vote on March 13 and March 14 on whether to leave the EU without any deal at all on March 29 – or delay.

Ahead of the votes starting at 1900 GMT, May repeated that she did not want any postponement.

“The government’s policy is to get the legally binding changes so a deal can be brought back to this house…and we can leave on March 29 with a deal,” she said.

EU leaders have said they would look at any request to delay Brexit.

But some questioned what use this would be unless deadlocked MPs put years of rows behind them and finally agreed a plan for Britain’s future.

“We don’t need more time, what we need most of all is a decision,” French President Emmanuel Macron said after talks with German Chancellor Angela Merkel in Paris.

May had repeatedly ruled out delaying Brexit, even after her divorce deal was overwhelmingly rejected by MPs in January.

But she faced a revolt by several of her own cabinet ministers, who fear the potentially disastrous effects on the economy of leaving the EU with no deal.

However, May’s change of heart caused outrage among the hardliners in her own Conservative Party, with influential MP Jacob Rees-Mogg warning that “any delay to Brexit is a plot to stop Brexit.”

May will ask the Commons to acknowledge her revised strategy, but MPs will also vote on 5 amendments to her statement that seek to force her hand.

One was put by opposition Labour leader Jeremy Corbyn, who dramatically shifted his own position on Brexit this week by taking a step towards calling for a new referendum.

The amendment calls on MPs to support Labour’s plan to form a new customs union with the EU and stay close to the bloc’s single market after Brexit.

If this fails – as expected – Corbyn has promised at a later date to back an amendment on a second referendum, which could have the option to stay in the EU.

MPs will also vote on an amendment seeking to preserve the rights set out in the divorce deal for than 3.5 million EU citizens living in Britain, even in the event of a no-deal Brexit.

“This issue transcends party politics, we are not dealing in borders or backstops, but people’s lives and their livelihoods,” said its author, Alberto Costa.

It has tacit government support, although Costa was forced to quit his position as a junior minister because he was not technically allowed to put forward the plan.

May’s government has already said she will protect the rights of EU citizens come what may and has urged other countries in the bloc to do the same for Britons abroad.

Costa was referring to the Irish border and the controversial “backstop” plan in May’s EU divorce deal that forms the basis of many MPs’ dislike of the text.

The arrangement would keep Britain in the EU’s customs union if and until another way is found – for example a free trade deal – to keep the frontier free-flowing.

Many Brexit-supporters fear the plan would undermine Britain’s hopes of becoming an independent trading nation, tying it indefinitely to EU rules.

May is seeking legal guarantees that the backstop would only be a temporary measure, although the EU has repeatedly said it will not reopen the divorce text itself. – Rappler.com