Feb 28, 2019 7:12 AM PHT
Agence France-Presse
Facebook Twitter Copy URL
Copied
The leaders meet for an intimate 'social dinner' after a handshake and some brief remarks at the historic Metropole Hotel in Hanoi, their second face-to-face following the historic summit in Singapore last June 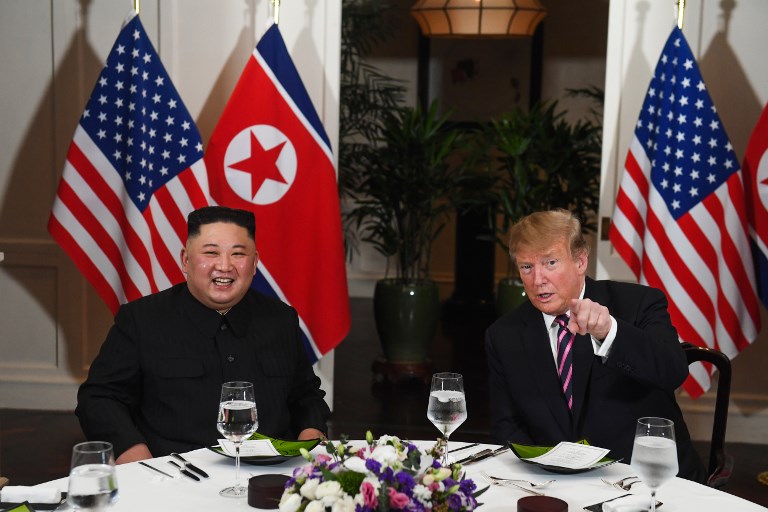 HANOI, Vietnam – Kimchi, shrimp and a side of diplomacy were on the menu Wednesday night, February 27,  as North Korea’s Kim Jong-un and US President Donald Trump sat down for dinner shortly after they kicked off their second summit in Hanoi.

The leaders met for an intimate “social dinner” after a handshake and some brief remarks at the historic Metropole Hotel in the communist capital, their second face-to-face following the historic summit in Singapore last June.

The evening offered more than just press ops as the leaders sat down to break bread with a few close advisors at the 5-star hotel.

The menu, details of which were released by the White House, appeared to attempt to bridge culinary cultural gaps with Korean and American classics on offer.

First up: Shrimp cocktail with avocado, lettuce and thousand island dressing, a nod to the popular US salad topper.

Next came grilled sirloin with a kimchi-stuffed pear in honor of the Korean dinner table staple.

A runny chocolate cake topped the feast for Kim and the US leader, who is known to have a healthy appetite.

Alcohol was off the menu – Trump is a noted teetotaler. Instead a virgin cocktail of persimmon and honey was poured for the leaders, who were pictured at a round table, covered with a tablecloth and set with 6 wine glasses that looked to be filled with water.

“Great meeting and dinner with Kim Jong Un,” Trump tweeted after the meal.

Among those at the table were US Secretary of State Mike Pompeo and Kim’s top envoy, Kim Yong-chol.

Kim and Trump are set to meet again Thursday, February 28, for their second and final day of talks about North Korea’s nuclear arsenal. – Rappler.com