Feb 28, 2019 7:46 AM PHT
Agence France-Presse
Facebook Twitter Copy URL
Copied
Here are some highlights from Cohen's opening and closing statements to the US House Committee on Oversight and Reform 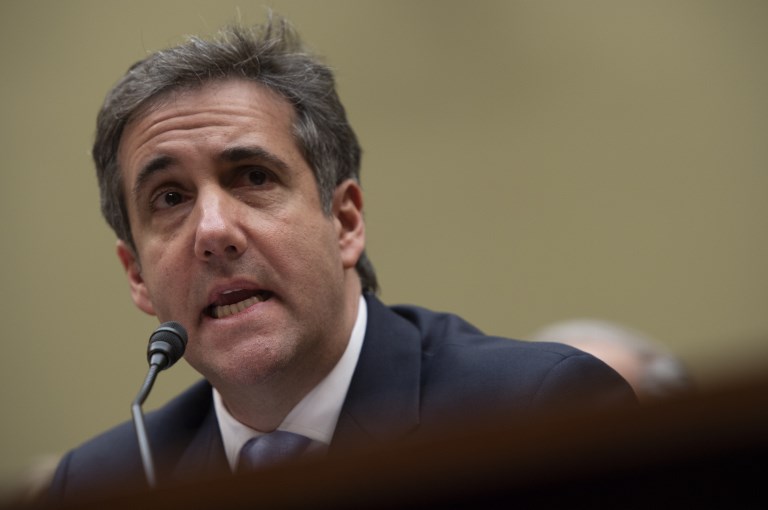 WASHINGTON, USA – Michael Cohen, Donald Trump‘s former personal attorney, testified on Wednesday, February 27,  before a committee of the US House of Representatives.

Here are some highlights from Cohen’s opening and closing statements to the House Committee on Oversight and Reform:

“I am ashamed of my weakness and misplaced loyalty –- of the things I did for Mr Trump in an effort to protect and promote him.

“I am ashamed that I chose to take part in concealing Mr Trump’s illicit acts rather than listening to my own conscience.

“I am ashamed because I know what Mr Trump is.

“Never in a million years did I imagine, when I accepted a job in 2007 to work for Donald Trump, that he would one day run for President, launch a campaign on a platform of hate and intolerance, and actually win. I regret the day I said ‘yes’ to Mr Trump. I regret all the help and support I gave him along the way.”

“Sitting here today, it seems unbelievable that I was so mesmerized by Donald Trump that I was willing to do things for him that I knew were absolutely wrong. For that reason, I have come here to apologize to my family, to the government, and to the American people.”

“Mr Trump is an enigma. He is complicated, as am I. He has both good and bad, as do we all. But the bad far outweighs the good, and since taking office, he has become the worst version of himself…

“Donald Trump is a man who ran for office to make his brand great, not to make our country great. He had no desire or intention to lead this nation – only to market himself and to build his wealth and power. Mr Trump would often say, this campaign was going to be the ‘greatest infomercial in political history.'”

“A lot of people have asked me about whether Mr Trump knew about the release of the hacked Democratic National Committee emails ahead of time. The answer is yes.”

“Mr Trump is a racist.

“The country has seen Mr Trump court white supremacists and bigots. You have heard him call poorer countries ‘shitholes.’

“In private, he is even worse. He once asked me if I could name a country run by a black person that wasn’t a ‘shithole.’ This was when Barack Obama was President of the United States.

“While we were once driving through a struggling neighborhood in Chicago, he commented that only black people could live that way.

“And, he told me that black people would never vote for him because they were too stupid.”

“Mr Trump is a cheat…

“It was my experience that Mr Trump inflated his total assets when it served his purposes, such as trying to be listed among the wealthiest people in Forbes, and deflated his assets to reduce his real estate taxes.

“Mr Trump is a conman…

“He asked me to pay off an adult film star with whom he had an affair, and to lie to his wife about it, which I did. Lying to the First Lady is one of my biggest regrets. She is a kind, good person. I respect her greatly – and she did not deserve that.

“When I say conman, I’m talking about a man who declares himself brilliant but directed me to threaten his high school, his colleges, and the College Board to never release his grades or SAT scores,” from a standardized college admission test.

“In closing I would like to say directly to the president we honor our veterans even in the rain. You tell the truth even when it doesn’t aggrandize you. You respect the law and our incredible law enforcement agents. You don’t villainize them. You don’t disparage generals, Gold Star families, prisoners of war and other heroes who have the courage to fight for this country.

“You don’t attack the media and those who question what you don’t like or what you don’t want them to say. You take responsibility for your own dirty deeds. You don’t use your power of your bully pulpit to destroy the credibility of those who speak out against you.

“You don’t separate families from one another or demonize those looking to America for a better life. You don’t vilify people based on the god they pray to and you don’t cuddle up to our adversaries at the expense of our allies.

“And finally you don’t shut down the government before Christmas and New Year’s just to simply appease your base.

“This behavior is churlish, it denigrates the office of the president and it’s simply un-American. And it’s not you.” – Rappler.com