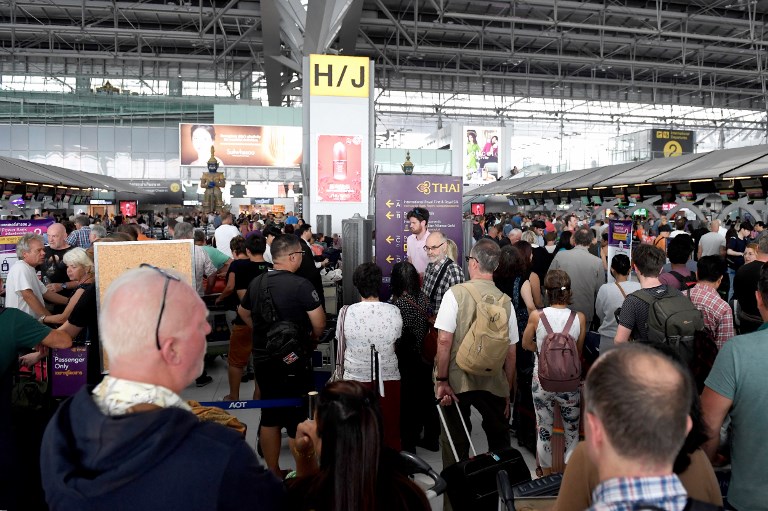 BANGKOK, Thailand – Thousands of travellers were stranded in Bangkok on Thursday, February 28, when Thai Airways cancelled all flights over Pakistan after Islamabad closed its airspace in response to soaring tensions with India.

Nearly 30 flights – the majority to and from European routes – were initially affected, the airline said, with 3 aircraft forced to return to Bangkok’s Suvarnabhumi airport and others cancelled or set to be re-routed.

The travel disruption spun out across the region, with Singapore Airlines’ usually direct flights to Europe forced to re-fuel on Wednesday, while a flight to Frankfurt was cancelled.

The disruption follows a snowballing crisis between nuclear-armed neighbors Pakistan and India, which has raised fears of an all-out war.

Pakistan claimed it shot down two Indian Air Force planes in its airspace, although it later clarified only one Indian pilot had been captured.

India said its forces had also shot down a Pakistani fighter jet as Pakistan suddenly closed its airspace.

Thai Airways said nearly 5,000 passengers had been caught up in the drama, as it struggled to find new routes to Europe with Iran “rejecting” a request to travel over its airspace, according to a spokesperson for the carrier.

But frustration mounted Thursday at Bangkok’s main airport at the sudden delays.

“We have waited here for 11 or 12 hours already,” Gerda Heinzel 55, a German tourist flying back to Munich after a holiday in Phuket.

“We have not been given anything to eat, anywhere to stay. There are no German-speaking staff to help us.” – Rappler.com