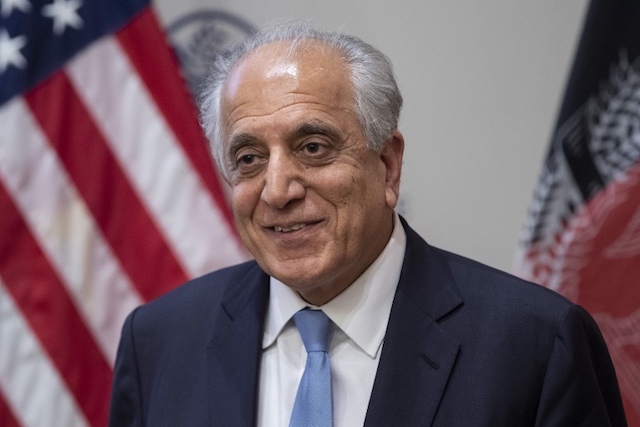 DOHA, Qatar – The US and the Taliban have paused negotiations in Doha, with the diplomatic push aimed at ending the war in Afghanistan set to restart over the weekend following “solid” talks between the adversaries.

The latest meetings follow marathon talks last month that saw the US and the Taliban walk away with a “draft framework” focused on a potential US troop withdrawal and a pact to prevent Afghanistan from harboring terrorists.

“Emerging from 3 solid days of talks with the Taliban in #Doha. Meetings were productive,” tweeted US special envoy Zalmay Khalilzad, who is leading the American side during the negotiations.

(1/3) Emerging from three solid days of talks with the Taliban in #Doha. Meetings were productive. We continue to take slow, steady steps toward understanding and eventually #peace.

“We continue to take slow, steady steps toward understanding and eventually #peace,” he said.

“Both sides will take the next two days for internal deliberations, with plans to regroup on Saturday,” Khalilzad added.

Taliban spokesman Zabiullah Mujahid confirmed the pause, adding the insurgents were “committed to the current peace process along with peace.”

The US has continued to push for a ceasefire in the war-torn country and the opening of negotiations between the Taliban and the Kabul government.

The Taliban however have repeatedly refused to meet with officials of the Afghan government, whom they dismiss as “puppets.”

Khalilzad hinted that headway was being made on the issue, tweeting “there is also progress on forming a national team in #Kabul ready to engage in intra-Afghan dialogue and talks with the Taliban.”

Earlier in the week the special envoy met with the Taliban’s top political leader Mullah Abdul Ghani Baradar in Doha, in what has been touted as the highest-level engagement between the two sides in the months-long diplomatic thrust.

Khalilzad welcomed the presence of Baradar – a cofounder of the Islamist movement – at the table, calling the militants’ negotiating side a “more authoritative Taliban delegation.”

Baradar is believed to be widely respected by the Taliban’s various factions and analysts said his participation would help garner support for any deal from insurgents on the frontlines.

General Scott Miller, the top US and NATO commander in Afghanistan, is also attending the talks.

President Donald Trump has repeatedly voiced his eagerness to end America’s involvement in Afghanistan, where 14,000 US troops are still deployed.

Afghanistan has been enmeshed in nearly constant conflict since the Soviet invasion of 1979, which was followed by civil war, the Taliban regime, and the US invasion in late 2001. – Rappler.com