Feb 28, 2019 10:54 PM PHT
Agence France-Presse
Facebook Twitter Copy URL
Copied
The Syrian Democratic Forces estimates the number of people inside the last ISIS redoubt at anything from a few hundred to several thousand 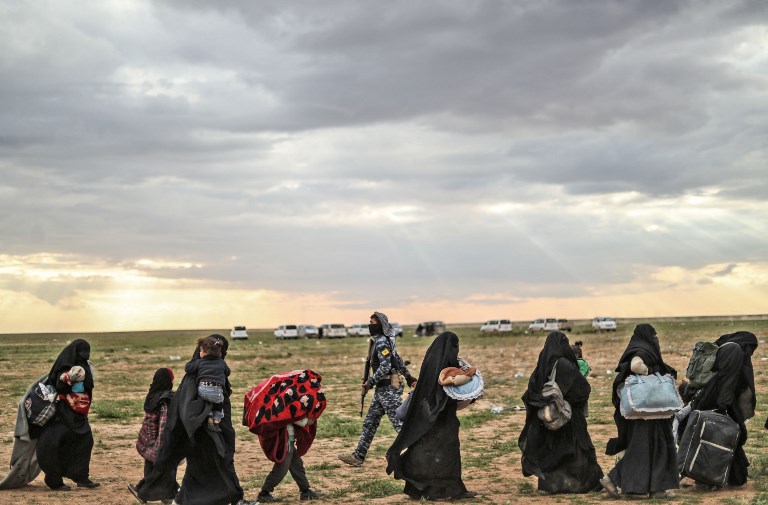 NEAR BAGHOUZ , Syria – Kurdish-led fighters readied Thursday, February 28, for a final onslaught against jihadist fighters who have been defending the last patch of their “caliphate” in eastern Syria.

The Syrian Democratic Forces were still struggling however to cope with the influx of families pouring out of Baghouz, the Islamic State group’s (IS, formerly known as ISIS or the Islamic State in Syria and Iraq) last bastion.

The thousands of famished and often wounded women and children filling the Al-Hol camp, a six-hour drive to the north, has raised fears of an outbreak of dysentery.

“We want the evacuation operations to finish as soon as possible so we can move to the next phase: an assault or the surrender” of the jihadists still inside, SDF spokesman Adnan Afrin told Agence France-Presse.

The SDF estimates the number of people inside the last ISIS redoubt, a patch of half a square kilometer on the banks of the Euphrates river, at anything from a few hundred to several thousand.

“We’re not sure about the number of civilians still inside but every day we’re astonished by the number of people coming out. We didn’t expect that,” Afrin said.

The SDF also announced Thursday its forces had secured the release of 24 of their comrades who had been captured by the jihadists but did not specify how.

There has been little fighting recently, with the use of human shields by the jihadists preventing major air raids to prepare for a ground assault.

The US-backed SDF is ready to move from the west and north of Baghouz while the Syrian regime fighters and Iraqi paramilitaries sealing the siege are stationed across the river and border.

Accounts from women who have left the enclave in recent days suggest ISIS is allowing many families to go, sending them to a hill from which they can walk to an assembly point and hand themselves over.

“We have been waiting here a long time for the vehicles that will take us out,” said Nadia al-Hamid, a woman from the nearby city of Mayadin.

“Some of the Islamic State fighters say they want to die there,” she said, claiming only foreign jihadists are left inside.

Thousands of women like Nadia, usually veiled in black from head to toe and their arms loaded with scruffy infants and bulging bags, have been trucked to the camp of Al-Hol in recent days.

The wave of arrivals has overwhelmed the Kurdish authorities, who have urged the world to step up the aid effort.

Many of the civilians who spent months holed up in the last dreg of the “caliphate” proclaimed almost five years ago, are in bad physical and mental health.

“There have been more than 100 cases of diarrhea among new arrivals and efforts are ongoing to prevent an outbreak of dysentery,” the International Rescue Committee said.

“We are now seeing thousands of people sleeping rough in the arrivals area at the camp, where they are exposed to the cold, wind and rain,” said Misty Buswell, the IRC’s Middle East advocacy director.

“Many of the children are having to cope without shoes or coats,” she added.

Save the Children has also said much more should be done to treat the trauma suffered by the hundreds of children emerging from the ruins of the ISIS “caliphate”.

Many of them have witnessed atrocities such as beheadings and stonings, experienced hunger and lived through daily bombardment, the British charity said.

Among the men suspected of being ISIS fighters, some are sent to different camps in the northeastern region of Syria administered by the Kurds.

Detained jihadists’ countries of origin are reluctant to repatriate them, fearing a public backlash and security threats. – Rappler.com