8 dead in Indonesia mine collapse as excavator digs for survivors

Feb 28, 2019 11:16 PM PHT
Agence France-Presse
Facebook Twitter Copy URL
Copied
(UPDATED) Three days after the Tuesday night collapse, authorities opt to use an excavator to haul away debris, as they try to get food and water to the miners believed to still be alive 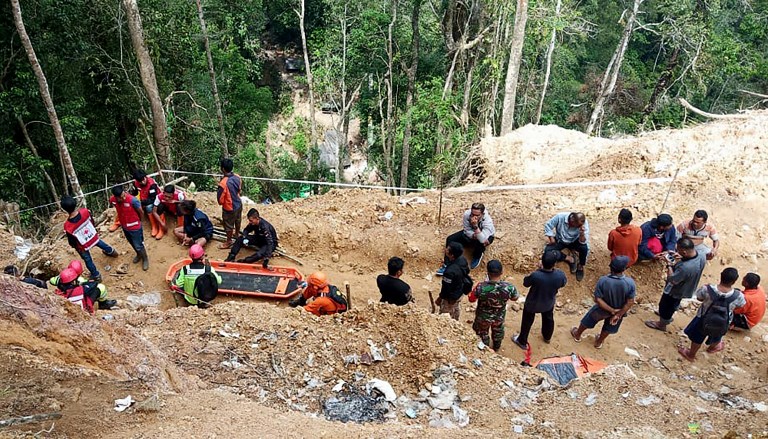 BOLAANG MONGONDOW, Indonesia (UPDATED) – Rescuers at a collapsed Indonesian gold mine brought in a heavy excavator to the perilous site Friday, March 1, as they ramped up efforts to reach more than 30 miners still trapped underground.

Search teams had been forced to use spades and even bare hands following the collapse at the remote site on Sulawesi island that has killed at least eight, fearing that a wrong move involving heavy equipment could make the situation worse.

But 3 days after the Tuesday night collapse, authorities said they had decided to use an excavator to haul away debris, as they try to get food and water to the miners believed to still be alive.

“We were afraid to use it because it might trigger another landslide or send debris tumbling onto the trapped miners,” local disaster official Abdul Muin Paputungan told AFP.

“But now we’ve got the permission from their family members to use it, despite the risks,” he added.

More than three dozen people are believed to be trapped at the mine.

Rescuers have communicated with a handful of victims who have cried for help from the depths of the mine.

The death toll rose to 8 on Friday, the disaster agency said, but offered no details on the latest victim.

A miner died of blood loss Thursday after his leg, pinned under rock, was amputated at the scene.

Army and disaster agency personnel have relied on ropes to navigate the steep, muddy area as survivors were carried away in makeshift stretchers to waiting vehicles.

Some 20 people have been hauled out of the mine alive since the accident, including the amputee who later died.

Victims have been treated for cuts and broken bones at a local hospital in the Bolaang Mongondow region of North Sulawesi, where 5 miners were killed in December after an illegal gold mine accident.

This week’s accident happened when support beams at the unlicensed site collapsed, according to the disaster agency.

In 2016, 11 miners died after a mudslide engulfed an illegal gold mine in Sumatra’s Jambi province.

In 2015, 12 people died when a mineshaft collapsed on Java island, and 11 miners died on Sumatra island when a mudslide engulfed a mine in Jambi province.  – Rappler.com