Fags and food: 5 things we learned from the Hanoi summit 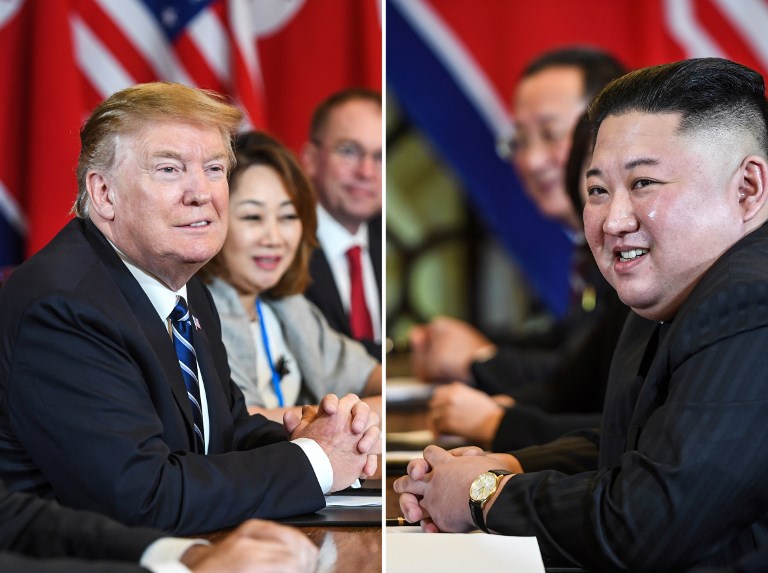 HANOÏ, Vietnam – Cigarette breaks and poolside strolls: the world again saw a more human side to North Korean leader Kim Jong-un and US President Donald Trump as their unlikely diplomatic rapprochement endured for a second date.

But bonhomie and bromance are not always enough and the summit ended abruptly without an agreement, with sanctions proving a deal-breaker.

Here are 5 things we learned from the two-day gathering in Vietnam’s capital Hanoi.

Hanoi was not a summit for anyone hoping to diet.

The US president was treated to a five-course lunch with the Vietnamese prime minister that included scallops, mango, spring rolls, cod, Wagyu beef, wood-ear mushrooms, lotus seeds and longans, a tropical fruit.

Perhaps understandably, the US side reportedly asked for a more “simple” dinner with Kim and backroom staff were said to be wrangling over the menu until the last minute.

In the end, the 80s classic of prawn cocktail, avocado and thousand island dressing kicked off the meal, followed by a fusion of styles for the main: grilled sirloin with a kimchi-stuffed pear. A runny chocolate “lava” closed it out.

The following day’s working lunch was abruptly cancelled but for the record, the menu showed they were due to eat snow fish – a deliciously tender Asian species – apple foie gras jelly and banoffee pie. In the event, the empty table settings spoke volumes.

For their first historic meeting in Singapore, Kim borrowed a plane from his Chinese friends but this time, he undertook a mammoth 4,000-kilometer rail journey in his olive green train.

Footage of him taking a cigarette break at a brief stopover in China lit up social media, his ever-present sister Kim Yo-jong rushing to his side to hand him an ashtray.

And to complete the set, automobiles played another role in this summit.

This time, a senior North Korean delegation was given a guided tour around a Vietnamese car factory touted as a model for Pyongyang’s potential economic development.

At home, Pyongyang carefully choreographs Kim’s every appearance in its tightly-controlled media, with state television often not even broadcasting natural sound from his events.

And while foreign journalists have tried before to draw an unscripted response from the reclusive leader, no one had ever been successful before.

So it must have come as quite a surprise to the Washington Post reporter who dutifully asked Kim if he was confident he could reach a deal with Trump, when he actually answered.

The North Korean went on to answer several more shouted questions at media opportunities – but analysts warned against interpreting it as some new openness on Pyongyang’s part.

In fact, a double booking snafu had already revealed the North Koreans’ reticence about close proximity to reporters. The White House set up a media center for its press corps in Kim’s hotel, but the journalists were then unceremoniously ejected.

Kim’s sister Kim Yo-jong rarely leaves her brother’s side, to the extent she has several times accidentally found herself in shot when the world’s cameras are trained on him.

At the inter-Korean summit last April, she wildly swerved off to the side of the red carpet when she realized she was in her brother’s limelight.

This time, as Trump and Kim took a poolside stroll at the luxury Metropole Hotel in Hanoi, she tried to make sure she was not the focus by hiding behind a tree – but was still clearly visible peeping through the leaves.

What about North Korea?

After the summit abruptly ended without a deal, the world’s media scrambled to Trump’s press conference to learn what the US president thought.

But Trump has a constant ability to surprise and he began not by talking about the past two days in Hanoi, but doing a tour of some of the rest of the world’s hot spots – including Venezuela, and India and Pakistan.

In contrast to his wide-ranging and lengthy news conference in Singapore, a jaded looking president wrapped up well within the hour with the parting shot: “That’s it ladies and gentlemen. I’m about to get on a plane and fly back to a wonderful place called Washington DC.”

His unenthusiastic tone belied the reality: aftershocks from his former lawyer’s testimony are waiting for him at home. – Rappler.com