Mar 1, 2019 10:59 AM PHT
Agence France-Presse
Facebook Twitter Copy URL
Copied
'If the British need more time, we will examine a request for an extension – if it is justified by new choices on the part of the British,' says French President Emmanuel Macron 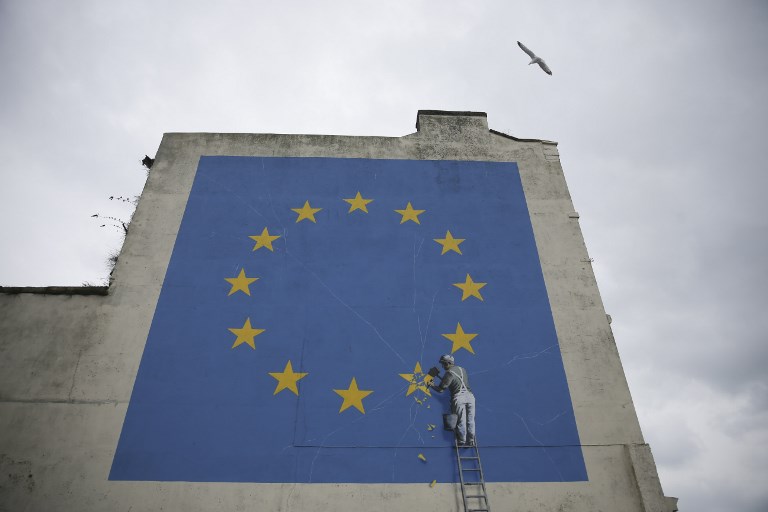 BRUSSELS, Belgium – The European Union is ready to give Britain some extra time beyond the March 29 deadline to achieve Brexit – albeit with strings attached.

“If the British need more time, we will examine a request for an extension – if it is justified by new choices on the part of the British,” French President Emmanuel Macron said at a Paris news conference Wednesday, February 27, with German Chancellor Angela Merkel.

But he reiterated that “the withdrawal agreement cannot be renegotiated.”

“If Britain needs more time then clearly we shall not refuse,” added Merkel, without mentioning conditions.

Spanish Prime Minister Pedro Sanchez weighed in by saying that “although Spain will not oppose granting a possible extension, this must have an assured perspective of resolution.

“Prolonging uncertainty by postponing deadlines is not a reasonable alternative nor is it desirable.”

EU chief negotiator Michel Barnier said London needed to spell out what it would do with the extra time.

“If there is a request to extend” the timeframe then that will need to be validated unanimously” by EU members, Barnier told France Info radio.

“And the question they will immediately ask is, ‘What for?’

“That’s what will determine the length of any extension.”

In a dramatic reversal of her strategy, Tuesday, February 26, saw British Prime Minister Theresa May promise to allow parliament to delay Brexit after threats of mass resignations from her ministers.

On Wednesday, she was due to ask lawmakers to approve a three-step plan that could give her more time to attempt to rework the draft divorce deal with Brussels.

Under the new plan, if she fails to come up with a Brexit deal that wins MPs’ support by March 12, May will swiftly call further votes on what happens next – including on Britain leaving the bloc without any deal and on postponing Brexit.

She stressed that any extension would be short, “not beyond the end of June”.

A de facto extension of any definitive deal will in any case be required as it will take at least 8 weeks to draw up the necessary legislation emanating from it, not least for sectors such as agriculture, fishing and immigration, explain those close to the negotiations.

“The general consensus is that a technical extension, i.e. one to implement a decision, would be rather easy to agree on for both sides,” note Larissa Brunner and Fabian Zuleeg in an analysis published Tuesday for the European Policy Centre (EPC) think-tank.

“If the decision is taken to hold a new general election or a second referendum, more time would be needed as well,” Brunner and Zuleeg said.

“If Westminster does not approve May’s deal or any alternative, prolonging the withdrawal period would at least avoid a catastrophic no-deal Brexit at the end of March, buying time for the UK to make a decision,” they added, identifying a “clear rationale for some form of extension.”

Guy Verhofstadt, leader of the European Parliament’s Brexit committee, warned an extension could only be short.

He tweeted: “If the UK Parl rejects her deal, Theresa May would like to extend the negotiating period. In my firm opinion, if this happens, this can never be longer than a couple of months so that a cross-party majority can be found. But certainly not 21 months!”

One EU diplomat observed that “giving the British the possibility of a pause for reflection could be useful to avert chaos.”

One fly in the extension ointment is the fact European elections are scheduled for May 23 to 26, but without British involvement given that normally by then the country would no longer be a member state.

Taking Brexit extra time as far as 2021 would open up another can of worms as that would intrude on the next EU budgetary cycle and hence require further British contributions, EPC analysts noted. – Rappler.com