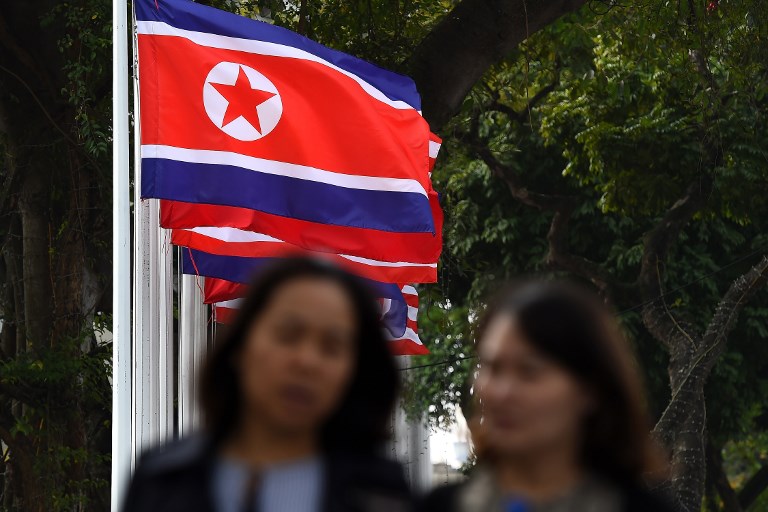 HANOI, Vietnam (UPDATED) – North Korea on Friday, March 1, promised further negotiations with the US despite a spectacular failure to strike a nuclear deal at their Hanoi summit, with both sides keeping the door of diplomacy open.

The high-stakes second meeting between the North’s leader Kim Jong-un and US President Donald Trump broke up in disarray Thursday, February 28, without even a joint statement.

In the aftermath, each sought to blame the other’s intransigence for the deadlock. (READ: Moon says Trump expressed regret at not striking North Korea deal)

Trump insisted Pyongyang wanted all sanctions imposed on it over its banned weapons programs lifted, and this was a bridge too far.

But in a rare late-night press briefing, the North Korean foreign minister said Pyongyang had only wanted some of the measures eased, and that its proposal to close “all the nuclear production facilities” at its Yongbyon complex was its best and final offer.

Despite the stalemate, the North’s official KCNA news agency reported Friday that the two leaders had had a “constructive and candid exchange.”

Relations between the two countries – on opposite sides of the technically still-unfinished Korean War – had been “characterized by mistrust and antagonism” for decades, it said.

Despite “inevitable hardships and difficulties” on the way to forging a new relationship, KNCA described the Hanoi summit as “successful” and said Kim had promised Trump another encounter.

An unusually downcast Trump told reporters on Thursday that he would “rather do it right than do it fast,” adding: “Sometimes you have to walk and this was just one of those times.”

After returning to Washington, the US president tweeted Friday that his relations with Kim were “very good.”

“We had very substantive negotiations with Kim Jong-un – we know what they want and they know what we must have,” he wrote.

Great to be back from Vietnam, an amazing place. We had very substantive negotiations with Kim Jong Un – we know what they want and they know what we must have. Relationship very good, let’s see what happens!

The outcome in Hanoi fell far short of the pre-meeting expectations and hopes, after critics said their initial historic meeting in Singapore – which produced only a vague commitment from Kim to work “toward complete denuclearisation of the Korean peninsula” – was more style over substance.

According to senior US officials, in the week leading up to the Hanoi summit the North Koreans had demanded the lifting of effectively all the UN Security Council economic sanctions imposed on Pyongyang since March 2016.

Before that date, the measures were largely focused on preventing technology transfers but more recent restrictions apply to several lucrative industries – coal and iron ore, seafood and textiles, among others – in an effort to force concessions from Pyongyang.

“It was basically all the sanctions except for armaments,” a senior US official told reporters. “It tallies up to the tune of many, many billions of dollars.”

In return, Pyongyang was only offering to close “a portion of the Yongbyon complex,” a sprawling site covering multiple different facilities – and the North is believed to have other uranium enrichment plants.

Trump had urged Kim to go “all in” to secure a deal, the official said, adding Washington was willing to do so.

“The weapons themselves need to be on the table,” he added, pointing to both Pyongyang’s existing stock of atomic bombs and the ICBMs which can reach the whole of the US mainland.

But the process was continuing and Washington was “encouraged by the opportunities ahead of us,” the official said. “There’s still ample opportunity to talk.”

Kim began a two-day official visit to Vietnam Friday, while in Manila, US Secretary of State Mike Pompeo told reporters: “We are anxious to get back to the table so we can continue that conversation that will ultimately lead to peace and stability.”

Analysts said the failure to reach a deal in Hanoi did not herald the end of negotiations.

“I don’t think it’s a disaster and it doesn’t end the dialogue process,” said Chris Green of the International Crisis Group.

Trump could not afford to do “a quote-unquote ‘bad deal'” in Hanoi, he added. “I think it benefits him to look tough, to string this out.”

But others pointed to a lack of preparation ahead of the meeting, with the two sides unable to bridge the gaps between them in time.

Former US ambassador to South Korea Kathleen Stephens said the impasse “highlighted the importance of working-level talks but simultaneously narrowed the range of options.”

Kim put “more emphasis” on sanctions relief than most observers predicted, she said, and mutual liaison offices and an end-of-war statement proved insufficient to persuade him to go further with denuclearization.

Joel Wit and Jenny Town of the respected Washington-based 38 North project said that while there had been fears beforehand that Trump “was going to give away the store, he did just the opposite, holding out for a better deal.”

“The two leaders are heavily invested in the process so hopefully, this failed summit will just be one more chapter in the rollercoaster ride that is the Trump presidency,” they wrote. – Rappler.com