Mar 1, 2019 11:28 PM PHT
Agence France-Presse
Facebook Twitter Copy URL
Copied
Venezuelan President Nicolas Maduro and his allies – including Russia – have accused the United States of attempting to carry out a coup against his government 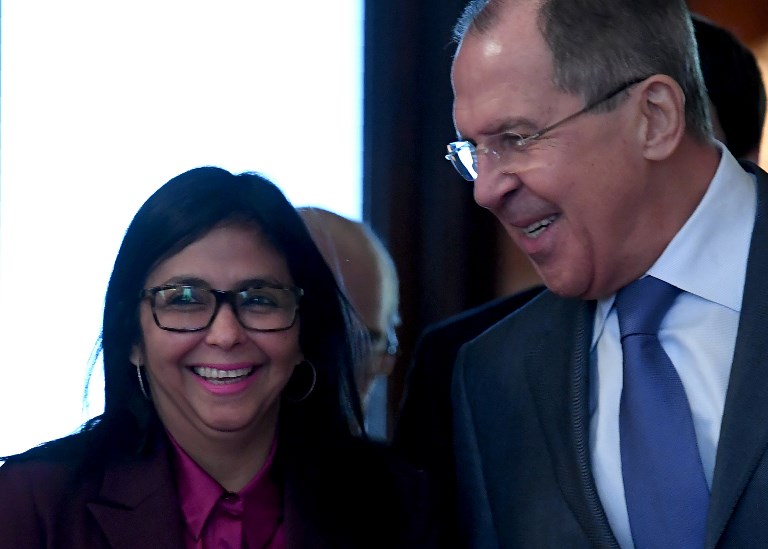 MOSCOW, Russia – Russia on Friday, March 1, vowed to maintain support for the embattled regime of its Venezuelan “friend” President Nicolas Maduro, including with humanitarian aid supplies.

“Russia will continue to assist the Venezuelan authorities in resolving social and economic problems, including through the provision of legitimate humanitarian aid,” Lavrov told a joint news conference with Rodriguez afterwards.

Battered by an economic meltdown, Venezuela descended into political crisis when opposition leader Juan Guaido declared himself interim president in January and asserted that Maduro was no longer legitimate.

Maduro and his allies – including Russia – have accused Washington of attempting to carry out a coup against his government.

The United States has recognized Guaido and led a diplomatic campaign in support of his leadership.

Lavrov said Russia had recently sent to Venezuela 7.5 tonnes of medical supplies and received a request for more shipments.

“We are currently considering it,” he said.

He added that Russia was also sending “mass supplies” of wheat to Venezuela, claiming those shipments helped normalize the humanitarian situation in the country, which is crisis-ridden despite its oil wealth.

Lavrov renewed warnings to the United States not to intervene militarily in Venezuela and reiterated Russia’s claim that Washington is planning to buy small arms, mortar launchers, and shoulder-fired anti-aircraft missiles known as MANPADS from an “Eastern European country” and station them “close to Venezuela.”

The weapons will be flown out by an airline of an ex-Soviet country loyal to Washington, Lavrov claimed without providing further details.

“Of course we see these intentions,” he said, calling on Venezuela’s neighbors Colombia and Brazil to resist any possible US intervention plans.

He expressed the hope that the fact that most countries did not want to see a military scenario would “cool hotheads in Washington, even though there are some there who nothing can stop.”

Lavrov said the two countries would continue to coordinate on foreign affairs.

“We are very closely cooperating and coordinating all our steps in the international arena,” he said.

“This has acquired special significance now that Venezuela is facing a frontal attack and unabashed interference in its domestic affairs.”

Rodriguez said her government would move the European offices of Venezuela’s state-owned oil company PDVSA from Portugal to Moscow.

“President Maduro has instructed that the office of the Venezuelan oil company in Europe, which is located in Lisbon, be moved and transferred to Moscow,” she said.

Portugal was one of the many EU countries that last month recognized US-backed opposition leader Guaido as Venezuela’s interim leader.

Rodriguez thanked Putin and “the Russian people” for all their support for “the constitutional and legitimate government.”

“We have come here with a very good program to deepen the strategic relationship we have with our sister Russia,” she added.

At a later meeting with the speaker of the Russian parliament Vyacheslav Volodin, Rodriguez said Russia has “everything Venezuela needs.”

“Venezuela, for its part, can give Russia the oil it needs,” she said. – Rappler.com