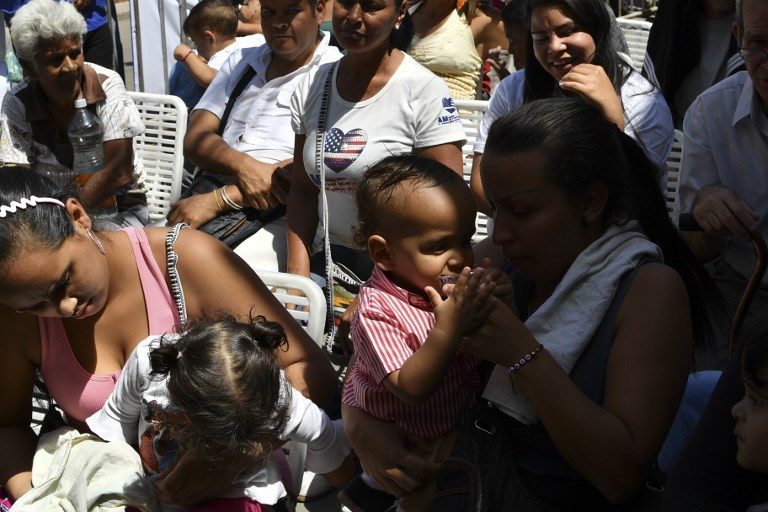 Facebook Twitter Copy URL
Copied
The US says it's targeting 6 Venezuelan military officers for stopping their aid from coming through the border, while Moscow promises relief through President Nicolas Maduro

WASHINGTON, USA – The United States and Russia clashed Friday, March 1 over how to assist crisis-wracked Venezuela, with Moscow pledging new relief channeled through President Nicolas Maduro and Washington slapping sanctions over the blocking of US aid it tried to push through the border. (READ: U.S. calls to ‘stand with freedom’ in Venezuela as EU gives ultimatum)

A day after Russia and China vetoed a US and European resolution at the UN Security Council that called for unimpeded aid deliveries, Washington said it was targeting 6 Venezuelan military officers for stopping last weekend’s US-led convoy. (READ: Trump blasts Venezuela over blocked U.S. aid shipments)

Four people were killed in the melee as Maduro’s forces prevented the 178 metric tonnes of rice, beans and other food from crossing into the country from Colombia. The leftist strongman says the aid is a pretext for a US-led invasion.

“We are sanctioning members of Maduro’s security forces in response to the reprehensible violence, tragic deaths and unconscionable torching of food and medicine destined for sick and starving Venezuelans,” Treasury Secretary Steven Mnuchin said in a statement.

The 6 include Major General Richard Jesus Lopez Vargas, the commander of the Venezuelan National Guard. The sanctions freeze any assets in the United States and penalize US financial dealings with the officials.

The United States also revoked the visas of 49 Venezuelan officials and their family members, the State Department said.

Venezuelan opposition leader Juan Guaido, whom Washington has recognized as interim president, had hoped to triumph in bringing in the stockpiles of food, which the United States coordinated with Colombia and Brazil.

Guaido has said 300,000 people could die without an influx of aid into Venezuela.

The United Nations says 2.7 million Venezuelans have fled since 2015 as the socialist economy crumbles, with basic supplies out of reach to the masses. (READ: United Nations to vote on dueling U.S., Russia drafts on Venezuela)

More than 50 countries recognize Guaido as Venezuela’s rightful president – but Maduro enjoys strong support from Russia, which is eager to challenge US interventionism, as well as China, which is concerned over the fate of billions of dollars Beijing has lent to Caracas. (READ: Russia vows more support for ‘friend’ Maduro, including aid)

“We are very closely cooperating and coordinating all our steps in the international arena,” Lavrov said.

“This has acquired special significance now that Venezuela is facing a frontal attack and unabashed interference in its domestic affairs,” he said.

Elliott Abrams, the US special representative on the crisis, charged that Maduro’s forces would turn Russian aid into a “political weapon” by providing it only to supporters.

Lavrov voiced hope that international pressure would “cool hotheads in Washington” who he said are seeking military intervention in Venezuela.

He alleged that the United States was planning to buy small arms, mortar launchers and shoulder-fired anti-aircraft missiles from an “Eastern European country” and station them “close to Venezuela.”

President Donald Trump has not ruled out military intervention in Venezuela, although even close US allies have said they would not support the use of force.

Republican Senator Marco Rubio, who has worked closely with Trump to seek Maduro’s ouster, appeared this week to suggest a violent climax as he posted on Twitter two pictures of Libyan dictator Moamer Kadhafi – one relaxed and smiling while in power, the other bloodied as he was lynched in an uprising.

Defying a travel ban by Maduro, Guaido went first to Colombia to try to bring in the aid and to meet with visiting US Vice President Mike Pence.

The 35-year-old political newcomer continued on to Brazil, where he met the new right-wing president, Jair Bolsonaro, and on Friday traveled to Paraguay and Argentina.

Guaido has said he will return home “at the latest on Monday” despite threats to arrest him.

After meeting with Argentine President Mauricio Macri, Guaido said: “The only step backwards in this process we have begun in Venezuela will be when many Venezuelans are able to return home.”

Abrams said the United States was “very concerned” about Guaido’s ability to return home safely and warned of a “very large reaction” if he is arrested. – Rappler.com