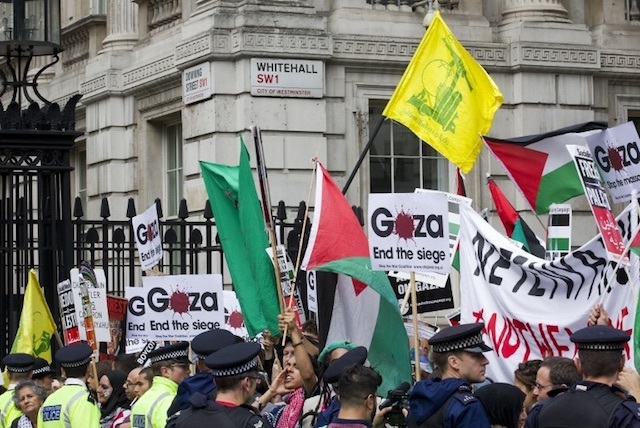 Britain said Monday, February 25 it would seek to make membership of the Shiite movement or inviting support for it a crime.

The decision followed outrage over the display of the Hezbollah flag, which features a Kalashnikov assault rifle, at pro-Palestinian demonstrations in London.

“Iran considers Hezbollah a legitimate and legal force which plays an effective and undeniable role in helping its country’s political stability and safeguarding its security,” the foreign ministry said on its website.

“[It] considers the decision to place Hezbollah on a terrorism blacklist to be wrong and irresponsible and one which will not contribute to the stability and security of Lebanon.”

Hezbollah was established in 1982 during the Lebanese civil war and fought a 2006 war with Israel.

It is also a major force in the country’s politics, holding 3 cabinet posts.

Britain blacklisted Hezbollah’s military wing in 2008 but had until now made no move against its political wing.

However, British Foreign Secretary Jeremy Hunt said on Monday that any distinction between its military and political wings “does not exist.”

“This (decision) does not change our ongoing commitment to Lebanon, with whom we have a broad and strong relationship,” he said.

Tehran is a major supporter of Hezbollah and its “resistance” against the Islamic republic’s arch foe Israel.

Britain’s decision drew swift praise from both Israel and the United States. – Rappler.com