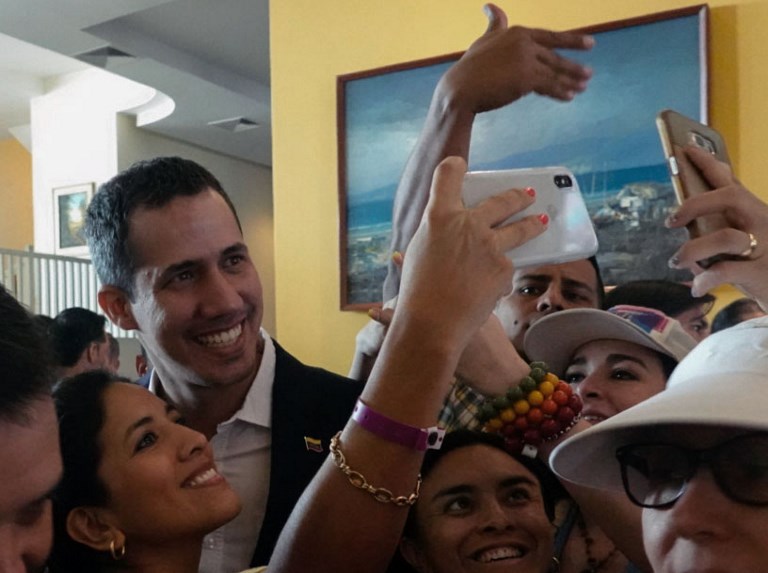 CARACAS, Venezuela (UPDATED) – Opposition supporters in Venezuela were set to take to the streets Monday, March 4, after leader Juan Guaido called for mass protests against President Nicolas Maduro – as the self-declared interim president prepared to return after a week touring Latin American allies.

Guaido’s reappearance in Venezuela would pose an immediate challenge to the embattled Maduro, who will have to decide whether to arrest him for defying a travel ban – thereby provoking strong international condemnation – or allow him to enter unmolested, which would undermine his authority, analyst say.

“I’m announcing my return to the country. I am calling on the Venezuelan people to mobilize all over the country tomorrow at 11:00 am (1500 GMT),” Guaido wrote Sunday, March 3, on Twitter.

Later, in a video with his wife shared on his social networks, he said if Maduro’s government “tries to kidnap us … it will be one of the last mistakes it makes.”

Guaido, who has been recognized by more than 50 countries as Venezuela’s interim president, did not say how or when he would return, though speculation is rife that a flight from the Colombian capital Bogota to Caracas is the most likely route.

However, it is possible that he plans to slip across the border with Colombia in the same way he left Venezuela, claiming on that occasion that he had help from Maduro’s military.

Guaido held talks in Salinas – a coastal resort town west of Guayaquil – on Saturday with President Lenin Moreno, and met with Venezuelan refugees.

On Sunday around noon he flew out of Salinas without revealing his destination.

‘Must return to Venezuela’

Defying a Venezuelan government travel ban, Guaido slipped across the border to Colombia on February 23 in an attempt to escort in truckloads of international humanitarian aid. While in Colombia he met with visiting US Vice President Mike Pence.

The 35-year-old political newcomer then traveled to Brazil, where he met the country’s new right-wing president, Jair Bolsonaro, and on Friday traveled to Paraguay and Argentina.

In a poke at Maduro during his trip, he said he was invited to visit Chile later this month.

Guaido, who heads the opposition-led National Assembly, stunned the world on January 23 when he proclaimed himself Venezuela’s acting president after the legislature declared Maduro a usurper and illegitimate over his May 2017 re-election, which was widely criticized as fraudulent. Maduro’s new term in office began on January 10.

Guaido wants to oust Maduro and set up a transitional government ahead of new elections.

Guaido “must return to Venezuela and continue to press internally, as the international support is enormous,” Eufracio Infante, 64, a Venezuelan lawyer and history teacher, told AFP.

“We are facing a very delicate situation and every minute we are approaching an outcome we hope will not be catastrophic,” he said.

Maduro – who retains the support of Venezuela’s powerful military – enjoys strong support from Russia, which accuses Washington of interventionism, and China, which is concerned over the fate of billions of dollars in loans to Maduro’s regime.

The socialist president warned last week that Guaido should “respect the law” and would have to “face justice” if he returns to the country.

Guaido said last week he intended to return to Venezuela “despite threats” to arrest him. The United States and other allies have expressed concern for his safety.

“The challenge has gone very far,” political analyst Luis Salamanca told AFP. “If he comes in and they stop him, it will generate strong internal reaction as well as internationally. Maduro is at permanent risk.”

European Union foreign policy chief Federica Mogherini warned on Saturday that any measure that would put at risk Guaido’s “freedom, safety or personal integrity would represent a major escalation of tensions and meet the firm condemnation of international community.”

“Guaido has grown so much politically that they haven’t been able to touch him, in the traditional ways… which is to put him in prison or force him to flee the country, harass him,” said Salamanca.

Pinera, a Chilean billionaire elected president for the second time in 2017, is a key supporter of Guaido, and joined the Venezuelan opposition leader in Cucuta, Colombia last weekend in a failed attempt to send international humanitarian aid into Venezuela.

Pinera said in an interview published in the El Mercurio newspaper that Bachelet’s predecessor at the UN, Zeid Ra’ad Al Hussein of Jordan, “was much clearer, more categorical in condemning human rights abuses.” – Rappler.com