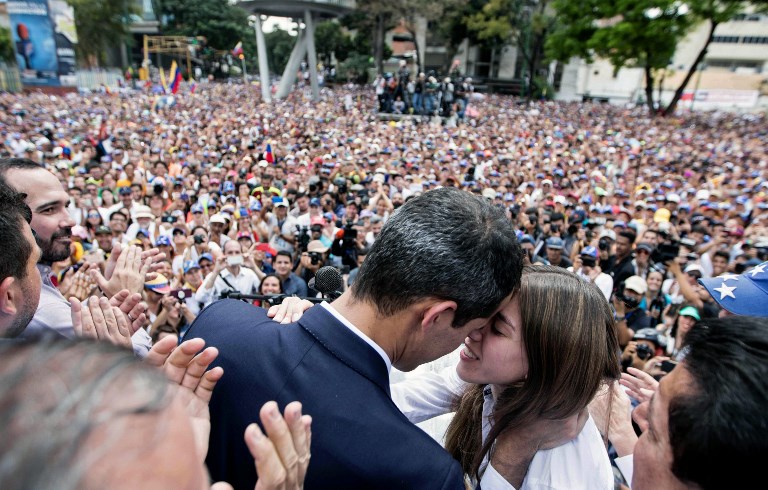 CARACAS, Venezuela – Venezuela’s opposition leader Juan Guaido received a hero’s welcome from thousands of flag-waving supporters chanting “Yes, you can!” as he returned to Caracas on Monday, March 4, defying the threat of arrest from embattled President Nicolas Maduro’s government.

“We know the risks we face, that’s never stopped us. The regime, the dictatorship must understand,” a defiant Guaido, who has been recognized as acting president by more than 50 countries, told a delirious crowd.

“We’re stronger than ever, let’s carry on in the streets, mobilized.”

Supporters, media, and diplomats from allied countries mobbed Guaido on his arrival at the international airport in Caracas before he headed into the city for a tumultuous homecoming by thousands of supporters.

There, Guaido announced a new protest march for Saturday, March 9, to ramp up the pressure on Maduro.

“All of Venezuela will return to the streets. We will not rest one second until freedom is achieved,” he said.

Venezuelans holding aloft flags, crosses and portraits of their young leader chanted: “Guaido! Guaido!” and “Yes you can!”

Just before his arrival, US Vice President Mike Pence sent a warning to Maduro to ensure Guaido’s safety, and Secretary of State Mike Pompeo later hailed his “safe return.”

“Any threats, violence, or intimidation against him will not be tolerated & will be met with swift response,” Pence wrote on Twitter.

Pompeo said in a statement that “the international community must unite and push for the end of Maduro’s brutal regime.”

Guaido left Venezuela 10 days ago in an unsuccessful bid to force through desperately needed humanitarian aid stockpiled in Colombia.

He then went on a tour of regional allies Colombia, Brazil, Argentina, Paraguay and Ecuador.

Guaido’s reappearance in Venezuela poses a direct challenge to Maduro, who had said the opposition leader would face justice when he returned.

Maduro must decide whether to arrest Guaido for defying a travel ban – thereby provoking strong international condemnation – or allow him to enter unmolested, which would undermine his own authority, analysts say.

“They won’t stop us with threats, we’re stronger and more united than ever and looking to the future,” Guaido told his supporters, holding up his passport in a message of defiance to Maduro’s government.

Other demonstrations took place all over Venezuela without major incident.

When he left Venezuela on February 23, Guaido said the military had helped him cross the border into Colombia, even though he was under a travel ban.

The high command has professed absolute loyalty to Maduro, however, and troops have blockaded border crossings to prevent the entry of humanitarian aid, supplied mostly by the United States.

Guaido has said some 300,000 people are at risk of death without those supplies of food and medicine.

He reiterated his call for the armed forces to abandon Maduro and to rein in the pro-regime armed civilian militias known as “colectivos.”

Venezuela is in the midst of an economic upheaval after four years of recession that have plunged many into poverty.

Hyperinflation has obliterated salaries and savings, while 2.7 million people have fled the country since 2015, according to a UN estimate.

Guaido, who heads the opposition-led National Assembly legislature, stunned the world on January 23 when he proclaimed himself Venezuela’s acting president.

He acted after the legislature declared Maduro a usurper and illegitimate over his May 2017 re-election, which was widely criticized as fraudulent. Maduro’s new term in office began on January 10.

He says he has not ruled out any measures to achieve that aim, while US President Donald Trump has repeated that “all options are on the table.”

Guaido must “now look for an idea around which to maintain hope,” Felix Seijas, an academic and director of Delphos pollsters, told AFP.

“He has to make the moves that will keep the international community from taking more radical action like an intervention.”

Maduro enjoys strong support from Russia, which accuses Washington of interventionism, and China, which is concerned over the fate of billions of dollars in loans to Maduro’s regime.

The socialist president warned last week that Guaido should “respect the law” and would have to “face justice” upon his return.

“Guaido has grown so much politically that they haven’t been able to touch him, in the traditional ways… which is to put him in prison or force him to flee the country, harass him,” said political analyst Luis Salamanca. – Rappler.com