Mar 5, 2019 8:45 AM PHT
Agence France-Presse
Facebook Twitter Copy URL
Copied
(UPDATED) 'This is a critical time for our nation, and we have a responsibility to investigate these matters and hold hearings for the public to have all the facts,' House Judiciary Committee chairman Jerry Nadler says 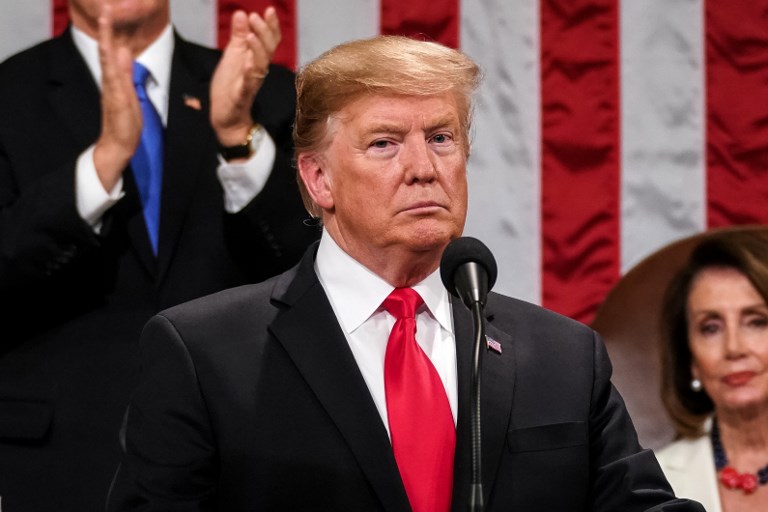 WASHINGTON, DC, USA (UPDATED)  – US Democratic lawmakers on Monday, March 4, launched their most ambitious investigation yet into alleged obstruction of justice and abuse of office by Donald Trump, targeting dozens of individuals in the president’s inner circle.

With controversies swirling around Trump, the powerful House Judiciary Committee’s chairman sent strongly worded letters to family members of the president – including sons Don Jr and Eric – as well as political confidantes and related entities.

The letters demanded documents that could shed light on possible wrongdoing by the administration and Trump himself.

Son-in-law Jared Kushner and the Trump Organization’s long-time chief financial officer, Allen Weisselberg, were among the 81 people and organizations, such as the National Rifle Association (NRA), that received letters from the panel’s Democratic chairman Jerry Nadler.

The request is the most serious overt ramp-up of investigations into Trump since Democrats took control of the House of Representatives in early January, and seeks to uncover whether Trump or his administration have participated in obstruction of justice or public corruption – potentially impeachable offenses.

“This is a critical time for our nation, and we have a responsibility to investigate these matters and hold hearings for the public to have all the facts,” Nadler said in a statement.

“Over the last several years, President Trump has evaded accountability for his near-daily attacks on our basic legal, ethical, and constitutional rules and norms,” he added.

“Investigating these threats to the rule of law is an obligation of Congress.”

Trump himself swatted away the probe as a “political hoax,” but said he would cooperate with the probe.

“I cooperate all the time with everybody,” he said at a White House event.

He later hardened his reaction, tweeting that any effort by Democrats to probe new avenues of possible wrongdoing “will never work.”

“Chairman Nadler and his fellow Democrats have embarked on this fishing expedition because they are terrified that their two-year false narrative of ‘Russia collusion’ is crumbling,” she added.

“Their intimidation and abuse of American citizens is shameful. Democrats are harassing the president to distract from their radical agenda of making America a socialist country, killing babies after they’re born, and pushing a ‘green new deal’ that would destroy jobs and bankrupt America.”

The unusually strong statement further claimed that “the Democrats are not after the truth, they are after the president.”

Conspicuously absent among his 81 targets is the president’s eldest daughter Ivanka Trump, who is a senior White House advisor and is married to Kushner.

The chairmen of 3 other House panels also joined the fray Monday, demanding the White House produce details of communications between Trump and Putin, after reports that such information was destroyed or hidden in the aftermath of their 2017 Helsinki summit.

The US intelligence community has concluded that Russia meddled in the 2016 presidential election, and that Putin ordered the influence campaign as a way to help elect Trump. The US president has repeatedly cast doubt on the findings.

Nadler’s broad investigation is focused on Trump’s business dealings and obstruction of justice allegations, along with possible Russian collusion. (READ: Trump blasts FBI counterintel probe into whether he worked for Russia)

It also will address accusations of campaign finance law violations and potential violations of the US Constitution’s ban on foreign emoluments.

Trump’s former personal lawyer Michael Cohen, in explosive congressional testimony last week, implicated the president in illegal activities, including a scheme shortly before the 2016 election to pay hush money to two women who say they had affairs with Trump.

One of the women reportedly received the payoffs through American Media Inc, a company run by a longtime Trump ally, David Pecker.

Pecker and AMI both received letters from Nadler demanding information about their involvement.

Letters to other key players include requests for information on the June 2016 meeting in Trump Tower attended by Kushner, Trump Jr, now-jailed former campaign manager Paul Manafort and a Russian lawyer reportedly close to the Kremlin, and documents surrounding the termination of FBI director James Comey.

The expansive new probe suggests the potential for laying the groundwork for possible impeachment proceedings against Trump.

But Democratic congressional leaders including Nadler and House Speaker Nancy Pelosi have been reticent about pushing for the president’s impeachment.

Nadler told ABC on Sunday that such action would be “a long way down the road.”

But in the same interview, he said that “it’s very clear that the president obstructed justice.”

In addition to the NRA, Nadler also sought documents from the White House, the Trump Organization, Trump’s charity, the FBI and Cambridge Analytica, a data company that worked with the Trump campaign and has been investigated by Congress in connection with Russia’s election interference efforts. – Rappler.com