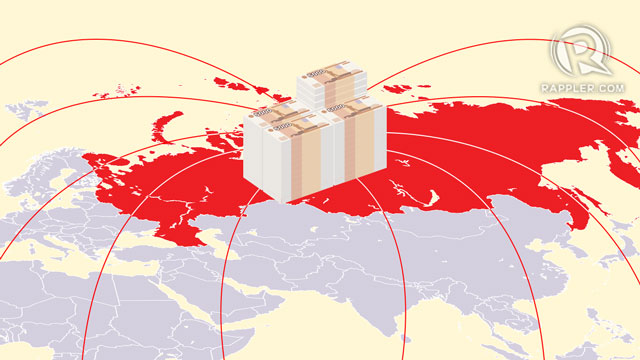 The report, published on Tuesday, March 4, named the scheme as the “Troika Laundromat” after the bank Troika Dialog and detailed how billions were sent out of Russia through 1.3 million transactions. Obtained by OCCRP and news site 15min.lt, the leak is considered as one of the largest in history.

The money was wired to accounts registered at Ukio Bankas in Kaunas, Lithuania.

The main purpose of the Troika Laundromat, according to OCCRP, was “to channel billions of dollars out of Russia.” The report stated that the system was set up by employees of the Troika and included 76 known nodes.

At the time of the transactions, OCCRP noted that Troika was headed by Ruben Vardanyan, who is connected to a string of high-profile individuals, including Russian President Vladimir Putin. In 2012, the bank was bought and merged with Sberbank.

The term “laundromats” refer to often too-complex systems wherein huge amounts of money are transferred from one point to another, usually to “secretly invest their ill-gotten millions, launder money, evade taxes, and fulfill other goals.” (READ: Offshore to online: How money was laundered in the past)

“The Laundromat allowed Russian oligarchs and politicians to secretly acquire shares in state-owned companies, to buy real estate both in Russia and abroad, to purchase luxury yachts, to hire music superstars for private parties, to pay medical bills, and much more,” it said.

“To protect themselves, the wealthy people behind this system used the identities of poor people as unwitting signatories in the secretive offshore companies that ran the system,” OCCRP added.

There were several endpoints of the money, including purchases of high-end properties such as luxury cars and estates, particularly in Great Britain, Spain, and Montenegro. The report, however, emphasized the difficulty of tracing a bulk of the money because the system’s users used their own offshore companies.

The Guardian, in a story published as part of the series, found that a charity run by Britain’s Prince Charles was a beneficiary of donations from an offshore company linked to the Troika Laundromat.

It noted, however, that “there is no suggestion that end recipients of funds were aware of the original source of the money, which arrived via a disguised route.”

“The documents indicate that criminal and legitimate money may have been mixed together, making it impossible to trace the original source, before passing through screen companies into the global banking system,” The Guardian wrote.

Another main figure linked to the scheme is Sergei Roldugin, a noted Russian cellist and one of Putin’s “best friends.” According to the report, at least $69 million went to companies associated with him.

The severity of how illegal the scheme is depends on whether prosecutors determine if any laws were broken, according to OCCRP.

Given the complexity of the system and that the Lithuanian bank accounts may be operated by various companies from different countries, “each jurisdiction has its own definitions of money laundering and tax evasion which determine whether a crime may have occurred.”

“Prosecutors will need to look at these transactions,” OCCRP said. “But they may find the statute of limitations has expired.”

But what’s important is to know that “laundromat” systems are, at the very least, problematic.

“Opaque money is also opaque power,” the group said. “Money that has passed through the Laundromat may show up in other countries to bribe local officials, buy positive news coverage, or empower extremist groups. It’s best to know whose money is whose.” – Rappler.com