Mar 5, 2019 7:58 PM PHT
Agence France-Presse
Facebook Twitter Copy URL
Copied
The latest evacuees also include relatives of jihadists, as well as civilians who had been held by the group as 'human shields' 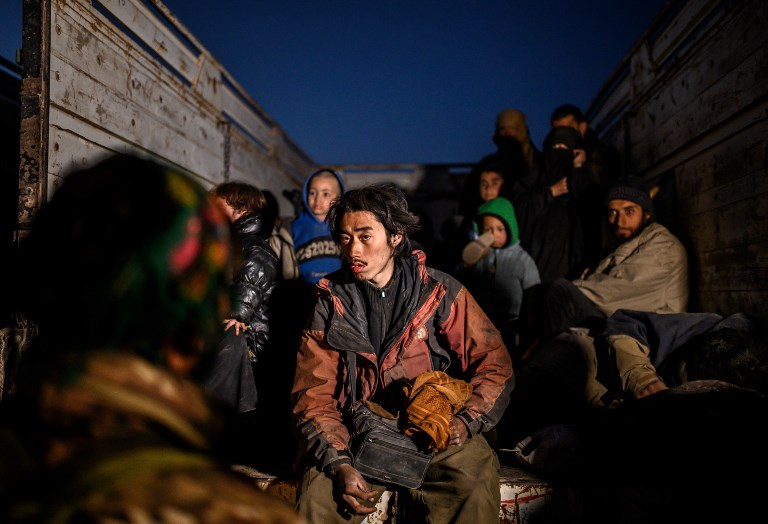 SYRIA – US-backed forces prepared Tuesday, March 5, to pluck more civilians out of the Islamic State group’s (IS, formerly known as ISIS or the Islamic State in Syria and Iraq) last Syrian stronghold, after evacuating almost 3,000 people including hundreds of fighters over the past 48 hours.

The mass outpouring of people from the dying “caliphate” has sparked a major humanitarian emergency, with the United Nations saying hundreds are expected to arrive at Kurdish-run camps for the displaced on Tuesday alone.

The Syrian Democratic Forces and allies from the US-led coalition smashed their way into the last sliver of ISIS territory in the village of Baghouz at the weekend, unleashing a deluge of airstrikes and artillery attacks on besieged fighters.

But the Kurdish-led force slowed down the offensive on Sunday, March 3, motivated by concern for civilians still trapped inside the pocket.

An SDF spokesman said thousands had been evacuated from the crumbling jihadist bastion since his force dialled down its advance.

“We managed to evacuate about 3,000 people from (the) ISIS pocket,” Mustefa Bali said on Twitter on Monday night, March 4, using another acronym for ISIS.

“A large number of Daesh (ISIS) jihadists surrendered to our forces among the same group,” he added.

An SDF official told Agence France-Presse (AFP) that “hundreds of ISIS fighters” were among the thousands that “surrendered” to the Kurdish-led force.

The latest evacuees also include relatives of jihadists, as well as civilians who had been held by the group as “human shields,” he said.

But civilians still remain inside the enclave, he said.

“Evacuations of civilians, jihadists and their relatives who want to surrender will likely continue” on Tuesday, he told AFP.

The Syrian Observatory for Human Rights, a Britain-based war monitor, said 280 ISIS fighters were among those that quit the jihadist redoubt since Sunday.

Diehard jihadists are fiercely defending their riverside hamlet after the SDF and the US-led coalition resumed their offensive on Friday night, March 1, following a two-week pause to allow for civilian evacuations.

The Kurd-led force pushed into Baghouz on Saturday,March 2, breaching the jihadist’s parameter.

On Monday night, an AFP correspondent near the frontline saw black smoke billowing over the besieged pocket after an airstrike hit jihadist targets.

The Observatory, which relies on a network of sources inside Syria, said artillery fire and air strikes continued during the night.

The thousands that have poured out of Baghouz have posed a huge humanitarian challenge in Kurdish-run camps for the displaced in northeast Syria.

Around 15,000 people reached the Al-Hol camp from Baghouz between February 22 and March 1, the UN humanitarian coordination office OCHA said on Monday.

The new arrivals have pushed the camp’s population to over 56,000, exacerbating already dire conditions at the crammed facility, it said.

Hundreds more are expected to arrive on Tuesday, according to OCHA.

After months under heavy bombardment and sometimes with very little to eat, families emerging from Baghouz are often in poor physical and psychological health.

Around 90 people, mostly children under the age of 5, have died en route to the shelter or shortly after arriving, OCHA said.

The jihadists are massively outnumbered and the SDF say they expect a victory within days.

The Kurdish-led forces launched their broad offensive on remaining ISIS strongholds in the Euphrates Valley 6 months ago.

The capture of Baghouz would mark the end of ISIS territorial control in the region and deal a death blow to the “caliphate,” which once covered huge swathes of Syria and Iraq.

At its peak more than 4 years ago, the proto-state created by ISIS was the size of the United Kingdom and administered millions of people.

It minted its own currency, levied taxes, published a wide array of propaganda material and designed its own school curricula.

The caliphate effectively collapsed in 2017 when ISIS lost most of its major cities in both countries.

The fall of Baghouz would carry mostly symbolic value.

The chiefs of the US and Russian militaries met in Austria on Monday to discuss the situation in Syria, where a residual US military force will remain following the territorial defeat of the ISIS group.

Syria’s war has killed 360,000 people and displaced millions since it started in 2011 with the brutal repression of anti-government protests. – Rappler.com