EXPLAINER: Where is the Venezuelan crisis heading? CARACAS, Venezuela – As the crisis in Venezuela rages on, it remains uncertain whether President Nicolas Maduro will cling on or opposition leader Juan Guaido will secure a transition of power.

But whatever the outcome, experts say it will be the military that tips the balance.

Here are the paths analysts say the crisis could take.

Pressure until collapse
Guaido, who enjoys strong popular support, returned to Venezuela this week after a trip across the Colombian border to help coordinate the entry of humanitarian aid — a failed effort Maduro had blasted as a precursor to US military intervention.

The self-declared interim president — recognized by over 50 countries, including the United States — avoided arrest upon his return, despite the fact he had violated a travel ban.

Back on home soil, he vowed to ramp up protests and continue to make life difficult for Maduro — namely by calling public sector strikes and asking the European Union to tighten sanctions on the socialist government.

This kind of pressure could push military leaders to embrace Guaido and “collapse the regime, paving the way for a transition with elections,” Michael Shifter, of Washington-based think tank Inter-American Dialogue, told Agence France-Presse.

“So far there are few signs that this is happening, but it’s possible.”

But first, sanctions implemented by US President Donald Trump — including a fuel embargo — would make life even harder for Venezuelans. That creates the potential to taint Guaido’s image, said analyst Luis Vicente Leon, of Venezuela’s Datanalisis.

In fact, some — including political scientist Luis Salamanca — believe Maduro is betting on a strategy of “attrition” from Guaido.

Political-military negotiation
Maduro’s approval rating has dwindled to just 14%, according to Datanalisis — but the loyalty of the military stands strong.

In a bid to rob Maduro of one remaining saving grace, Guaido has offered military members amnesty if they defect — unless they are accused of crimes against humanity.

Guaido says around 700 military members and police officials have broken from Maduro in recent weeks, although no high-ranking personnel.

Getting commanding officials on side would require “specific guarantees” for those implicated in corruption and human rights violations — not to mention with economic interests. 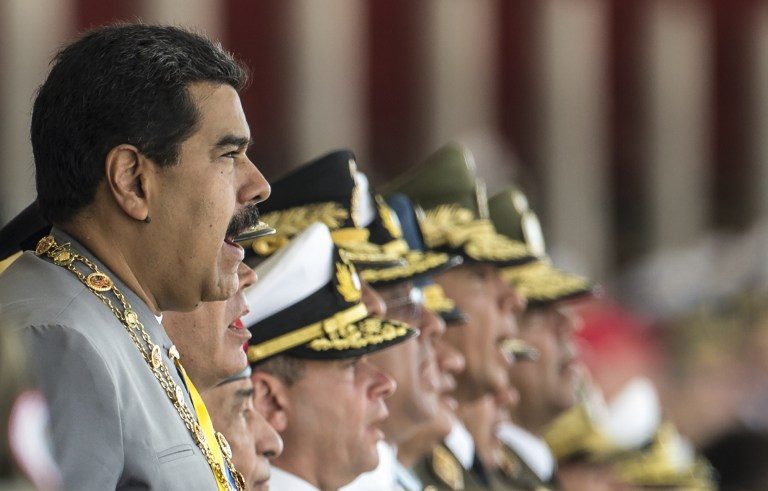 “A transition like this would take longer, but it would increase the likelihood of it not being violent,” according to Shifter.

Leon believes soldiers fear being decimated by a new government or failing in a rebellion against Maduro, so any amnesty must be “negotiated face to face.”

That could lead to a solution such as a set-up in which “the military retains control of its forces as a guarantee of self-protection,” he suggested.

An International Contact Group on Venezuela — made up of EU and Latin American countries — has pushed for government-opposition talks. So far, however, that has not moved forward.

Coup or invasion
A third scenario could see the military break from Maduro and organize elections — or overthrow him in a traditional coup, according to Shifter.

“The scenario of military intervention, led by the United States, seems less and less likely — but it can’t be ruled out, depending on how the situation develops,” he said.

Guaido asked the Lima Group — the primarily Latin American bloc that recognizes his leadership — to consider all options, but it declined to intervene via force.

However, for analyst Diego Moya-Ocampos of IHS Markits, intervention is still on the table for two reasons.

The first is the “magnitude and scale” of a humanitarian crisis — and second is the possibility that Maduro “could attack Guaido or (opposition-controlled) parliament.”

But Leon warned intervention could unleash the same type of chaotic violence from Maduro-loyal squads seen during the failed bid to bring in aid.

And regional conflict — featuring Colombian guerrillas operating in borderlands — is not beyond the realm of possibility either, Shifter said. – Rappler.com