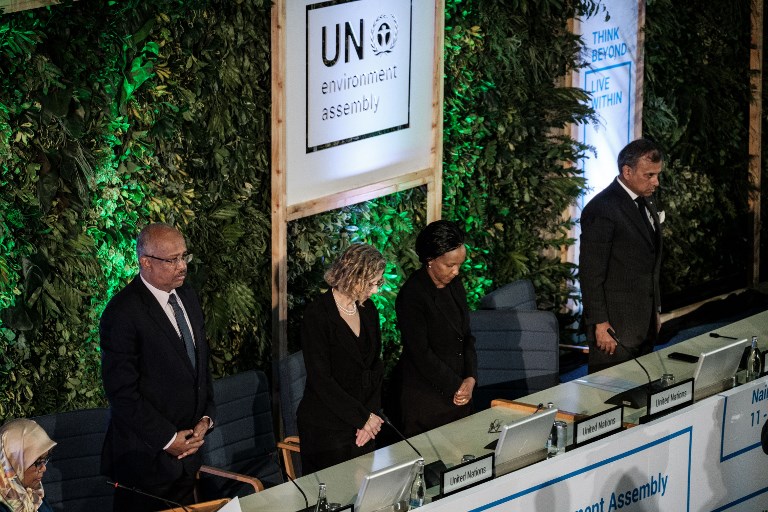 NAIROBI, Kenya – A world forum on addressing the planet’s environmental crisis opened in Nairobi on Monday, March 11, the mood darkened by the Ethiopian Airlines tragedy that killed 157 people a day earlier, including at least 22 UN staff, many headed for the event.

Delegates arrived at the sprawling compound to see the UN flag flying at half-mast and the usually colorful display of national flags removed.

As they wondered aloud who among their colleagues may have been on board the ill-fated Boeing, some hugged and comforted one another.

According to Maimunah Sharif, head of UN-Habitat, at least 22 UN employees were among those who died when the Nairobi-bound Ethiopian Airlines jet crashed early Sunday, March 10, just 6 minutes after take-off from Addis Ababa.

“I stand before you on the first day of the UN Environment Assembly, which has officially commenced today in the wake of this tragedy,” she told delegates.

“We will not forget this tragedy, nor those who perished. Let us reflect that our colleagues were willing to travel and to work far from their homes and loved ones to make the world a better place to live.”

Kicking off a somber opening plenary, UN Environment Assembly president and Estonia’s environment minister, Siim Kiisler asked delegates, many dressed in black and some in tears, to observe a minute’s silence.

A member of the UNEP secretariat told Agence France-Presse it was “still trying to consolidate” the number of staffers who died.

Among the UN employees on the downed Ethiopian Airlines flight were some who worked for the World Food Programme (WFP), the UN refugee agency UNHCR, the International Organization for Migration (IOM) and the Food and Agriculture Organization (FAO).

“The environmental community is in mourning today,” said Joyce Msuya, a Tanzanian scientist who is the UN’s acting environment head.

“We lost UN staff, youth delegates travelling to the Assembly, seasoned scientists, members of academia and other partners.”

It is the second time in less than 5 years that delegates have died in a plane disaster on their way to a major global conference.

In July 2014, a Malaysia Airlines Boeing 777 passenger jet, flight MH17, was shot down over eastern Ukraine en route from Amsterdam to Kuala Lumpur, killing all 298 on board, most of them Dutch citizens.

Among the victims were 6 delegates to the 20th International AIDS conference in Melbourne, including top Dutch expert Joep Lange.

Delegates in Nairobi have been briefed by a string of UN reports outlining in stark terms the damage mankind is doing to its home, from climate change to acidification of the oceans and species loss.

The meeting comes at a “critical time for action to protect and reverse the degradation of our planet,” Kiisler warned.

One briefing on the eve of the summit said the cost of ecosystems loss through agriculture, deforestation and pollution since 1995 was as much as $20 trillion (17.7 trillion euros).

A major topic in Nairobi is plastic waste. Mankind currently produces more than 300 million tonnes of plastics each year, and there are at least 5 trillion plastic pieces floating in our oceans.

Delegates are expected to work towards a deal on the lines of the 2015 Paris Agreement that would see each country vow to slash plastic waste by 2030. – Rappler.com