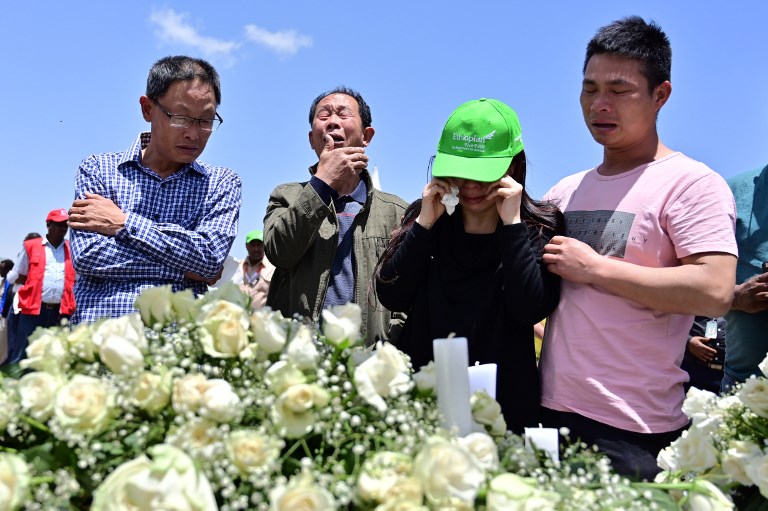 PARIS, France – The black box flight recorders from the Boeing 737 MAX aircraft that crashed in Ethiopia were flown to France Thursday, March 14, for analysis as the ban on the model went worldwide after President Donald Trump added the US to countries that have grounded the aircraft.

France’s BEA air safety agency confirmed it has received the recorders from the plane that crashed shortly after takeoff from Addis Ababa on Sunday, March 10, killing all 157 people aboard.

BEA investigators will try to remove information from the cockpit voice and flight data recorders, which were damaged in the disaster.

The information that black boxes contain about what the pilots and plane were doing help explain 90% of all crashes, according to aviation experts.

On Wednesday, March 13, US authorities said new evidence showed similarities between the Ethiopia crash and that of a Lion Air flight in Indonesia in October that claimed the lives of 189 people.

The Federal Aviation Administration said findings from the crash site near Addis Ababa and “newly refined satellite data” warranted “further investigation of the possibility of a shared cause for the two incidents.”

An FAA emergency order grounded 737 MAX 8 and MAX 9 aircraft until further notice, effectively taking the aircraft out of the skies globally after a growing number of airlines and countries had decided not to fly the planes until it was ascertained there are no safety issues.

Trump told reporters the “safety of the American people and all peoples is our paramount concern.”

The US action came after many airlines around the globe voluntarily took the model out of service and many countries banned it from their airspace.

FAA acting chief Daniel Elwell said the agency has been “working tirelessly” to find the cause of the accident but faced delays because the black box flight data recorders had been damaged.

The new information shows “the track of that airplane was close enough to the track of the Lion Air flight… to warrant the grounding of the airplanes so we could get more information from the black boxes and determine if there’s a link between the two, and if there is, find a fix to that link,” Elwell said on CNBC.

Boeing’s shares have sunk 10% since Sunday’s crash, wiping out more than $20 billion off the company’s market value.

Boeing chief Dennis Muilenburg said he supported the US decision “out of an abundance of caution” but continued to have “full confidence” in the safety of the plane.

The company continues its efforts “to understand the cause of the accidents in partnership with the investigators, deploy safety enhancements and help ensure this does not happen again,” he said in a statement.

The MAX series is Boeing’s fastest-selling model, but it is still relatively new with fewer than 500 of the aircraft in service.

There are 74 of the planes registered in the United States, and 387 in use worldwide with 59 carriers, according to the FAA.

The accounts of the recent crashes were echoed in concerns registered by US pilots on how the MAX 8 behaves.

At least 4 American pilots made reports following the Lion Air crash, all complaining the aircraft suddenly pitched downwards shortly after takeoff, according to documents reviewed by Agence France-Presse (AFP) on the Aviation Safety Reporting System, a voluntary incident database maintained by NASA.

In two anonymous reports on flights just after the Lion Air disaster, pilots disconnected the autopilot and corrected the plane’s trajectory.

One said the flight crew reviewed the incident “at length… but can’t think of any reason the aircraft would pitch nose-down so aggressively.”

It was unclear if US transport authorities review the database or investigate the incidents. However, the FAA said this week it had mandated that Boeing update its flight software and training on the aircraft.

Questions about the Lion Air crash have honed in on an automated stall prevention system, the MCAS, designed to automatically point the nose of the plane downward if it is in danger of stalling.

According to the flight data recorder, the pilots of Lion Air Flight 610 struggled to control the aircraft as the MCAS repeatedly pushed the plane’s nose down following takeoff.

The Ethiopian Airlines pilots reported similar difficulties before their aircraft plunged to the ground as they tried to return to the airport.

Boeing was criticised after the Lion Air crash for allegedly failing to adequately inform 737 pilots about the functioning of the stall prevention system.

Ethiopian Airlines CEO Tewolde GebreMariam said on Sunday said the captain on the flight, Yared Mulugeta Getachew, 29, was an experienced aviator with more than 8,000 flight hours.

Andrew Hunter, a defence industry expert at the Center for Strategic and International Studies in Washington, said that while Boeing and the FAA had good track records on addressing safety concerns, sometimes the combination of automated systems and humans did not work smoothly.

“It is hard to get a system to work seamlessly with human beings,” he told AFP.

“The fact the system was fighting the pilot was not an unintended consequence,” because it should counteract a pilot error and correcting this is “challenging.”

In Ethiopia, distraught families wept and lit candles on Wednesday as they visited the deep black crater where the plane smashed into a field, disintegrating on impact.

The Ethiopian Airlines plane was less than 4 months old when it went down 6 minutes into its flight to Nairobi.

Families of the victims from Kenya, China, the United States and Canada, as well as diplomatic staff from embassies, visited the crash site. – Rappler.com