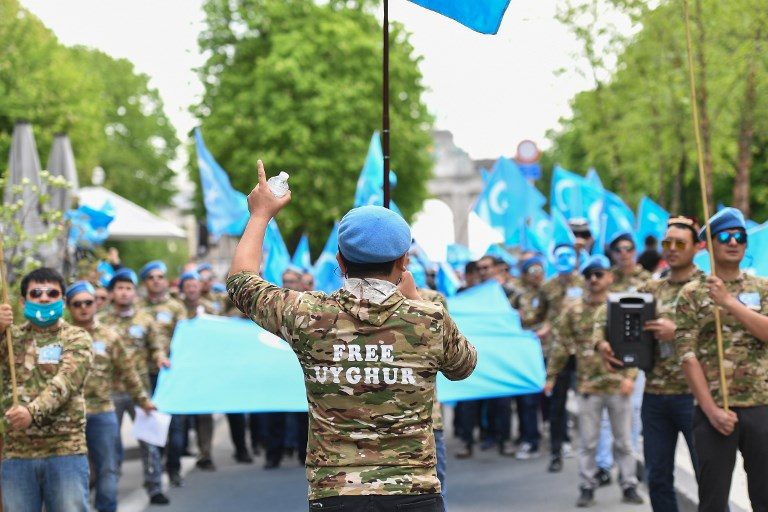 GENEVA, Switzerland – China on Friday, March 16 flatly rejected criticism of mass detainment of Muslim minorities in its restive Xinjiang region, insisting it has set up “campuses,” not camps, in a bid to counter radicalization.

He was responding to a long line of comments and recommendations regarding the situation in Xinjiang made during a so-called Universal Periodic Review (UPR) of China’s rights record before the council last November.

A number of countries at the time cited estimates that some one million Uighurs and other mostly Muslim Turkic minorities are being held in detention centers in Xinjiang, and asked China to halt the practice.

But Le insisted Friday that such claims showed “a total disregard for the facts,” and were aimed at “interference under the disguise of human rights.”

“The training centers… are actually boarding schools or campuses, and not camps as claimed by the ill-intentioned few,” stressing the official line that they are meant to help educate and rehabilitate people susceptible of falling “prey to terrorist extremism.”

He said the “trainees” at the centers were free to go home regularly and to have contact with their families, and that those who graduated easily found jobs, allowing them to break “free of both extremist ideology and poverty.

“We are delighted to see on the faces of the trainees smiles of contentment and appreciation of the government.”

Le said there had been “thousands” of terrorist attacks in Xinjiang since the 1990s, but that thanks to the use of the “vocational training centers,” not a single attack had taken place in the past 27 months.

“As the counter-terrorism situation improves, the training program will be gradually downsized, leading to its completion,” he said.

Nearly 100 countries requested the right to respond to China’s remarks, but due to strict time constraints, only around a dozen were permitted to take the floor.

In advance, the rights council drew the name of the first country, Mali, from a hat, and from there countries were called upon in alphabetical order, through to the Philippines.

This meant that most critical voices from Europe and North America were not called upon, with only Norway speaking up against China’s Xinjiang policies. Most other speakers took the opportunity to praise China for accepting and respect for human rights.

Non-governmental organizations were also given a chance to speak, but there too, groups praising China grabbed 6 of the 10 available speaking slots.

Activists said this showed that China had gone to great lengths to stifle criticism at the event.

John Fisher of Human Rights Watch commented on the lack of criticism during the event, suggesting that Beijing had coerced states into singing its praises.

“Let me start by acknowledging China’s active participation in the UPR process – not just through its national report, but also through its tireless efforts to encourage such a large number of states to uncritically endorse its approach,” he said.

Sarah Brooks of the International Service for Human Rights agreed, telling Agence France-Presse that the numerous pro-China NGO’s speaking at the event was “yet again an example of the investment they will make to buy silence and cover of abuse.” – Rappler.com