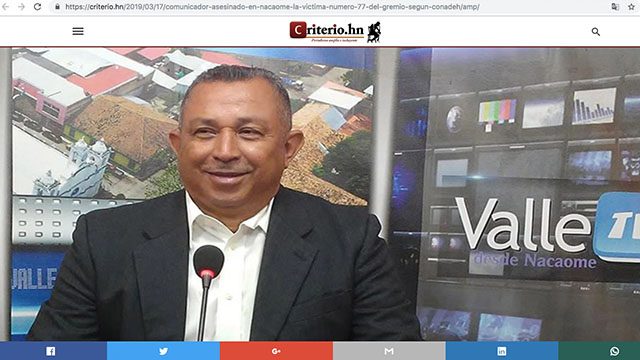 Facebook Twitter Copy URL
Copied
Police says Leonardo Gabriel Hernandez, a TV reporter, was shot and wounded in the street and taken to a clinic, where he died

TEGUCIGALPA, Honduras – A Honduran reporter critical of the government was shot dead in the south of the central American country, police and rights groups said Sunday, March 17.

Hernandez – a Valle TV reporter whom a witness said was on foot when met by someone who opened fire – was a sharp critic of Honduras government.

The non-governmental Committee for Free Expression (C-Libre) said Hernandez was the director and presenter of the “El Pueblo Habla” (“The People Speak”) program.

Spokesman for the National Commissioner of Human Rights, Julio Velasquez, said 77 journalists, broadcasters, owners and employees of media have been murdered in Honduras since 2001.

Ninety-two percent of the crimes go unpunished and are not investigated, he said.

Honduras and its neighbors, El Salvador and Guatemala, form the “Northern Triangle”, the world’s most violent region outside of a conflict zone.

A 2018 Inter-American Development Bank study reported the country’s second largest city, San Pedro Sula, has a murder rate of more than 80 per 100,000 inhabitants – between 10 and 20 times greater than the world average. – Rappler.com