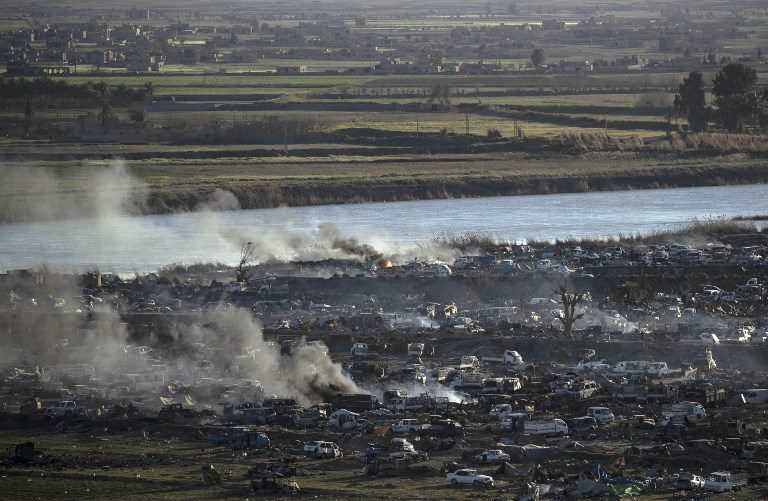 BAGHUZ, Syria – Kurdish-led forces Thursday, March 21, combed the banks of the Euphrates in eastern Syria to smoke out the last jihadists preventing the much-delayed announcement of the demise of the Islamic State’s (IS, formerly known as ISIS or the Islamic State in Syria and Iraq) “caliphate.”

The Kurdish-led Syrian Democratic Forces (SDF) launched an assault against the last ISIS bastion in the village of Baghouz on February 9.

On Tuesday, March 19, they cornered diehard fighters into a few acres of farmland by the Euphrates River, after forcing them out of the main encampment where they had been confined.

The six-month-old operation to wipe out the last vestige of ISIS’s once-sprawling proto-state is close to reaching its inevitable outcome, but SDF spokesman Mustefa Bali on Thursday said a victory announcement would be premature.

“Our force is still carrying out combing operations and searches” for hidden jihadists, he said.

“As soon as we are done, we will announce the liberation” of Baghouz, the spokesman added.

His comments came one day after US President Donald Trump said the jihadists’ self-proclaimed “caliphate” would be “gone as of tonight.”

It also came in response to reports earlier on Thursday that the ISIS enclave had completely fallen.

“The SDF media team has not announced this” victory, Bali said.

The frontline was quiet on Thursday, for the second-day in a row, as the SDF paused its push to allow for more surrenders.

The eerie silence that reigned over the battlefield was interrupted only by the whooshing of warplanes overhead.

SDF fighters walked unarmed in a wasteland of mangled vehicles on the camp’s outskirts.

The flags of the Kurdish-led force dotted the area.

“We are monitoring these fighters and if they don’t surrender we will launch a new operation against them,” he said.

While some fighters are refusing to surrender, other jihadists and their relatives are still turning themselves in, the SDF official said.

“We are giving them a chance to surrender by slowing the military offensive,” he said.

More than 66,000 people, mostly civilians, have quit the last ISIS redoubt since January 9, according to the SDF.

Thousands of people who have streamed out of the last ISIS stronghold now fill overcrowded camps and prisons run by the Kurds further north.

Around 2000 women and children from Baghouz arrived on Wednesday night at the largest camp – Al Hol.

The camp is struggling to host 72,000 people, including more than 40,000 children, the International Rescue Committee said.

“Up to 60 (of the latest) arrivals needed immediate hospitalization and there were another 12 deaths recorded,” the IRC said in a statement.

“These women and children are in the worst condition we have seen since the crisis first began.

“Many have been caught up in the fighting and dozens have been burnt or badly injured by shrapnel,” Wendy Taeuber of the IRC was quoted as saying.

At least 138 people, mostly children, have died en route to Al Hol or shortly after arriving at the camp since December, according to the IRC.

“We are expecting another 3,000 to arrive soon and we are very worried that they may be in even worse shape,” it said.

The “caliphate” which ISIS supremo Abu Bakr al-Baghdadi proclaimed in 2014 once covered territory larger than the United Kingdom, straddling Syria and Iraq.

It has crumbled under years of military operations in which Syrian and Iraqi forces backed by their international allies clawed back the land but left cities in ruins and populations homeless.

The loss of Baghouz will mark the end of ISIS as a land-controlling force but not as a potent military player in the region.

Many of its leaders and fighters in Iraq and Syria have long reverted to a guerrilla war, launching hit-and-run attacks from desert, mountain and other hideouts.

French Foreign Minister Jean-Yves Le Drian said Wednesday that the “final defeat” of ISIS should be announced in a few days by the SDF or the US-led coalition.

The battles in Baghouz are the last active front in the Syrian war that has killed more than 370,000 people since 2011. – Rappler.com