Man of Zeal: #SupermanBangkok champions voting ahead of Thai poll 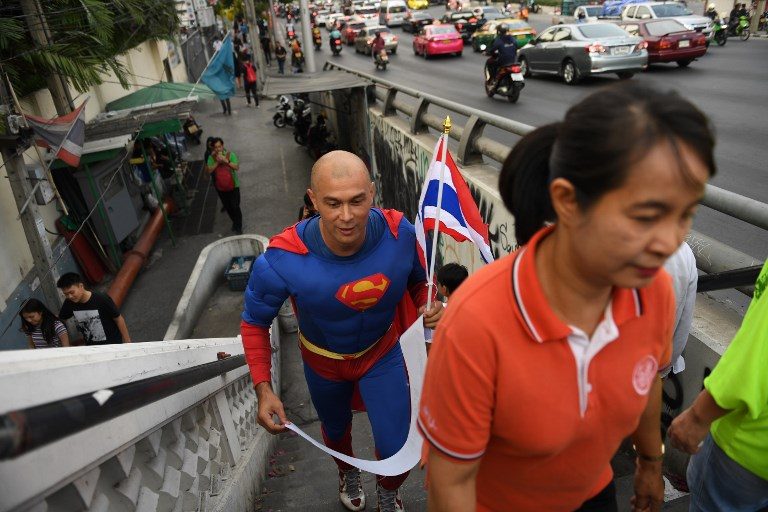 Facebook Twitter Copy URL
Copied
Dressed in a Superman suit with a red cape flowing behind him, a sweaty David Pfizenmaier jogs through Bangkok's standstill traffic and stops to unfurl a sign: 'If you love Thailand: Vote'

BANGKOK, Thailand – Dressed in a Superman suit with a red cape flowing behind him, a sweaty David Pfizenmaier jogs through Bangkok’s standstill traffic and stops to unfurl a sign.

“If you love Thailand: Vote,” it says, below the hashtag #supermanbangkok.

Thais go to the polls this weekend for the first time since a coup in 2014.

The 40-year-old Thai-German said Thursday, March 21, he is not campaigning for a specific party, but is instead on a mission to boost turnout, especially among younger voters, “because the military government is not the solution for the long term”.

The March 24 poll is also the first election in 8 years, and it will determine whether the generals-turned-politicians can extend their grip on power.

The audience for Pfizenmaier’s message is vast.

There are 51 million eligible voters, including more than 7 million first-timers aged 18-25.

And enthusiasm for taking part in the democratic process is already clear.

Eighty-seven percent of Thais registered for advance voting showed up, according to the Asian Network for Free Elections.

In his quest to lift numbers Pfizenmaier has spread his message at universities, sidewalks and busy intersections, carrying a Thai flag and posing for countless selfies.

“I hope I can convince some people to do their duty as citizens and help to move the country forward,” he said.

Most people he encounters say they are voting, so he may lean in and ask “You are not lying to Superman right?”

Raised in Germany and a citizen of Thailand, Pfizenmaier works in the travel industry and has used the red and blue suit before in charity events.

Tall and athletic, he resembles his fictional alter-ego, bounding from one potential voter to the next.

“People that know me say I have a lot of energy,” he said, adding that he finds the comic book hero inspirational.

“Everyone has a Superman gene.”

At rush hour in Bangkok on Thursday, he took advantage of the city’s long traffic lights to walk between motorbikes and cars, flashing a grin and holding up his sign.

After about 30 minutes only one person said they were not voting.

Others gave him thumbs up, high-fives, nodded their heads yes, or shook his hand.

One voter named Thirawi told him he had already voted, casting a ballot in the northern city of Chiang Mai.

“Superman thanks you!” Pfizenmaier responded. – Rappler.com