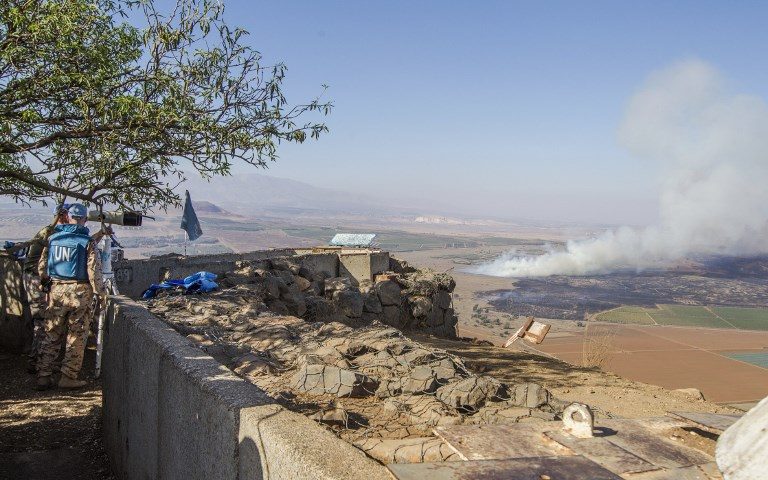 DAMASCUS, Syria (UPDATED) – Syria, its allies, and fellow states in the region Friday, March 22, condemned US President Donald Trump’s pledge to recognize Israel’s annexation of the Golan Heights slamming the move as a violation of international law.

Trump said Thursday, March 21, it was time for Washington to recognize Israel’s sovereignty over the strategic territory, which it seized from Syria in the Six-Day War of 1967 and annexed in a move never recognized internationally.

His abrupt tweet triggered delight in Israel, but outrage from other countries in the region as well as powerhouses such as Russia and Turkey.

“Hopefully it will remain (just) a call.”

Any such move would break with UN Security Council resolutions and with more than half a century of US foreign policy, which treated the Golan as occupied territory whose future would be negotiated in talks with Syria on a comprehensive peace.

The territory’s return has always been a key Syrian national demand, championed by government and rebels alike throughout the bloody civil war that has ripped the country apart since 2011.

Trump’s comments showed the extent of his administration’s “blind bias” towards Israel.

“The Golan was and will remain Arab and Syrian,” the source said.

The foreign ministry sent a letter to UN Secretary General Antonio Guterres, urging him to reiterate the UN’s rejection of Israeli claims over the Golan, SANA said.

Turkey, which hosted the last indirect peace talks between Israel and the Syrian government in 2008 but has backed Syrian rebels, said the change risked plunging the region into a “new crisis.”

“We will never allow the occupation of Golan Heights to be made legitimate,” President Recep Tayyip Erdogan said.

Iranian Foreign Minister Mohammad Javad Zarif tweeted he was “shocked by @realDonaldTrump continuing to try to give what is not his to racist Israel.”

And France added its voice to the chorus of outrage, saying the Golan had been “occupied by Israel since 1967” and it did not recognize Israel’s annexation.

In his tweet, Trump said the Golan was “of critical strategic and security importance to the State of Israel and Regional Stability!”

“After 52 years it is time for the United States to fully recognize Israel’s Sovereignty over the Golan Heights,” he said.

The Gulf Cooperation Council said Trump’s statement would not change the internationally recognized fact that the “Golan heights are Syrian lands forcefully occupied by Israel.”

Jordan’s Foreign Minister Ayman Safadi said lasting peace in the region requires Israel to withdraw from all Arab territories it occupies, including the Golan.

Egypt urged “respect (for) legitimate international resolutions and the United Nations Charter on the unacceptability of land appropriation by force.”

Following decades of calm along the Golan armistice line after the Arab-Israeli conflict of 1973, tensions flared with the eruption of civil war in Syria in 2011.

It has also targeted suspected positions of Iran and its Lebanese ally Hezbollah, which have intervened militarily to back President Bashar al-Assad.

Since the Syrian government decisively defeated rebel fighters near the armistice line last year with Iranian and Hezbollah support, Israel has repeatedly vowed to prevent its arch enemies from establishing a long-term military presence.

“At a time when Iran seeks to use Syria as a platform to destroy Israel, President Trump boldly recognizes Israeli sovereignty over the Golan Heights,” the right-wing prime minister wrote on Twitter.

Leon Panetta, a veteran Democrat who served as CIA director and defense secretary among other roles, blasted Trump for “tweeting out another policy that obviously has not been worked out with our international partners.”

The Golan move is Trump’s latest diplomatic bombshell as he seeks to redraw the fraught Middle East in Israel’s favor.

In 2017, Trump went against decades of practice in recognizing the disputed city of Jerusalem as Israel’s capital, rather than the previously accepted Tel Aviv. – Rappler.com