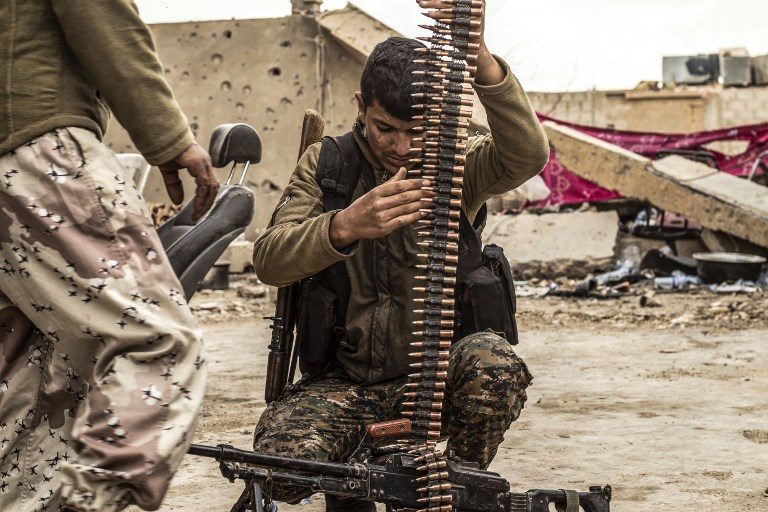 Facebook Twitter Copy URL
Copied
Though the WHite House says the 'caliphate' has been wiped out, the Syrian Democratic Forces say clashes are still ongoing

In the afternoon mortar rounds hit a former ISIS encampment in the village of Baghouz on the banks of the Euphrates River, sending a column of dark smoke up into the sky, an Agence France-Presse (AFP) correspondent said.

The White House said the once-sprawling “caliphate” had been wiped out but the Syrian Democratic Forces (SDF) it backs on the ground stressed that clashes were ongoing.

“Clashes are ongoing in Baghouz. Small ISIS groups refusing to surrender are launching attacks and our forces are responding,” SDF spokesman Adnan Afrin told an AFP reporter near Baghouz.

The White House has jumped the gun several times on announcing the demise of ISIS territorial control.

An SDF official who asked not to be named said warplanes of the US-led coalition resumed strikes on suspected jihadist positions before dawn on Friday.

Top SDF commander Jia Furat said his forces were engaging with the jihadists on several fronts.

The US-led coalition said the “operation to complete the liberation of Baghouz is ongoing”.

“It remains a hard fight, and Daesh is showing that they intend to keep fighting for as long as possible,” it said, using an Arabic acronym for ISIS.

The SDF launched what it called its “final assault” against the jihadists’ last redoubt in Baghouz on February 9.

Finally on Tuesday, they cornered diehard fighters into a few acres of farmland along the Euphrates River, after forcing them out of the encampment.

Inside Baghouz on Friday afternoon, SDF fighters languished idle on the roofs of abandoned buildings in the middle of a sea of ruins, an AFP reporter said.

In the no-man’s-land on the edge of what was once the jihadist encampment, a few US-backed fighters walked about unarmed.

The 6-month-old operation to wipe out the last vestige of ISIS’s once-sprawling proto-state is close to reaching its inevitable outcome, but the SDF has said a declaration of victory will be made only after they have completed flushing out the last tunnels and hideouts.

According to SDF spokesman Kino Gabriel, hundreds of ISIS fighters, including some women, still remain on the outskirts of the jihadist encampment.

They are hiding along the bank of the Euphrates River as well as at the base of a hill overlooking Baghouz, he told AFP.

“In around one or two days, we will conclude military operations if there are no surprise developments,” he said.

More than 66,000 people, mostly civilians, have quit the last ISIS redoubt since January 9, according to the SDF.

The thousands who have streamed out have been housed in cramped camps and prisons run by Kurdish forces further north.

On Wednesday night, around 2,000 women and children from Baghouz arrived at the largest camp, Al-Hol, which is struggling to cope with the influx of tens of thousands of people, many in poor health.

Since December, at least 138 people, mostly children, have died en route to Al-Hol or shortly after arrival, according to the International Rescue Committee.

ISIS declared a “caliphate” in June 2014 after seizing a vast swathe of territory larger than Britain straddling Iraq and Syria.

The loss of the Baghouz enclave would signal the demise of the “caliphate” in Syria, after its defeat in Iraq in 2017.

The jihadists still retain a presence in eastern Syria’s vast Badia desert and have continued to claim deadly hit-and-run attacks in SDF-held territory.

In a video released on ISIS’s social media channels on Thursday, jihadists vowed to continue to carry out attacks.

“To those who think our caliphate has ended, we say not only has it not ended, but it is here to stay,” said one fighter.

He urged ISIS supporters to conduct attacks in the West against the enemies of the “caliphate.”

The war in Syria has killed more than 370,000 people and displaced millions since it erupted following the repression of anti-government protests in 2011. – Rappler.com