Messy days ahead as Thai factions jostle to lead next government 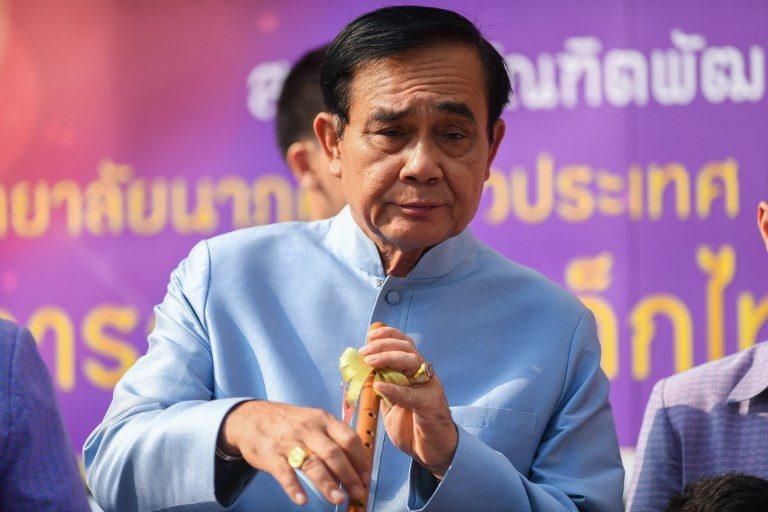 BANGKOK, Thailand (UPDATED) – Rival political camps jostled for position Tuesday, March 26, hoping to form a government after Thailand’s first election since a coup – a poll clouded by allegations of a bungled counting process that left voters perplexed about the outcome.

The junta is in pole position to return to power as a civilian administration after preliminary results from the poll on Sunday, March 24, showed its proxy party had secured an unexpected majority of the popular vote.

Around 7.6 million votes went to Phalang Pracharat with 94% of ballots tallied, the Election Commission has said.

That gives it – and its prime ministerial candidate, junta chief Prayut Chan-O-Cha – a strong claim to legitimacy from a poll held under new junta-scripted rules.

It is more than 400,000 ballots ahead of Pheu Thai, the populist party toppled from power by the 2014 coup and affiliated with self-exiled former premier Thaksin Shinawatra.

But Pheu Thai still appeared set to become the largest party in the lower house, on track for 137 constituency seats compared to Phalang Pracharat’s 97, according to early figures.

Experts predict days – perhaps weeks – of messy negotiations, with both parties claiming the right to form a government.

Disqualifications of candidates and disputes over poll irregularities are likely to reshape the balance of the lower house before May 9, when final results are to be published.

As the horse-trading plays out, questions are also swirling over election irregularities, with millions of invalidated ballots, dodgy oversight of polling and bungling by election authorities that may have wildly skewed initial numbers.

The Election Commission is also releasing the results in a staggered fashion, claiming “human error” when reporters pointed out that a handful of provinces returned more ballots than the voter turnout.

It also came under fire for declaring some 1,500 ballots from New Zealand void because they did not arrive on time.

Regional election monitor ANFREL announced Tuesday in a statement the initial ballot tabulation process was “deeply flawed,” which did “further damage to the perceived integrity” and public trust in the results.

About 5.6% of the ballots – or just under 1.9 million – were invalidated, according to ANFREL, which said the statistic was “high” compared to an average of 2% to 3%.

“It is very confusing and someone needs to clarify it,” said Watcharee Chanpeng, a 41-year-old voter in Bangkok.

Prayut, a stern army chief who engaged in increasingly bizarre publicity stunts ahead of polls as part of an image-makeover, was in playful form as he arrived for a cabinet meeting on Tuesday, playing a flute taken from music students in front of cameras.

But later comments to reporters were more direct.

“I will put this country on the road to unity and reconciliation to move the country forward,” he said, adding that “in this world, nothing comes easy.”

The serious business of forming a government still lies ahead.

Pheu Thai said Monday, March 25, it was entitled to try to put together an anti-junta coalition as the majority party in the lower house.

That effort would lean on the Future Forward party, which took over 5 million votes, emerging from nowhere to become the third biggest party in Thai politics.

The party was given impetus by the millennial vote who support its radical agenda of economic and military reform.

“We are willing to form a coalition with the party that got the most seats,” its telegenic figurehead Thanathorn Juangroongruangkit told reporters late Monday.

Another smaller party, Bhumjaithai, the vehicle of a cabal of savvy billionaires whose allegiance shifts with the political winds, is likely to be crucial in swinging a lower house majority towards or against the junta party.

It has proposed Anutin Charnivirakul, 52, for prime minister and trailed promises of boosting rural incomes across the northeast by allowing medicinal cannabis to be grown.

Seen as a rare compromise figure across a political landscape bisected by personal hatreds, he was once a senior official in a Shinawatra party.

Thaksin sits at the heart of Thailand’s political rupture.

His parties had won all elections since 2001 with votes from the poor, in the process unsettling the Bangkok-centric elite and their royalist army allies who have struck back with coups and court cases.

On Monday he told Agence France-Presse in Hong Kong he believed the polls were “rigged” and riddled with “irregularities.” – Rappler.com