Notre-Dame, soul of the French nation

Apr 16, 2019 7:32 AM PHT
Agence France-Presse
Facebook Twitter Copy URL
Copied
The iconic cathedral is deeply enmeshed in Paris's history since construction began at the end of the 12th century and lasted more than two centuries to 1345 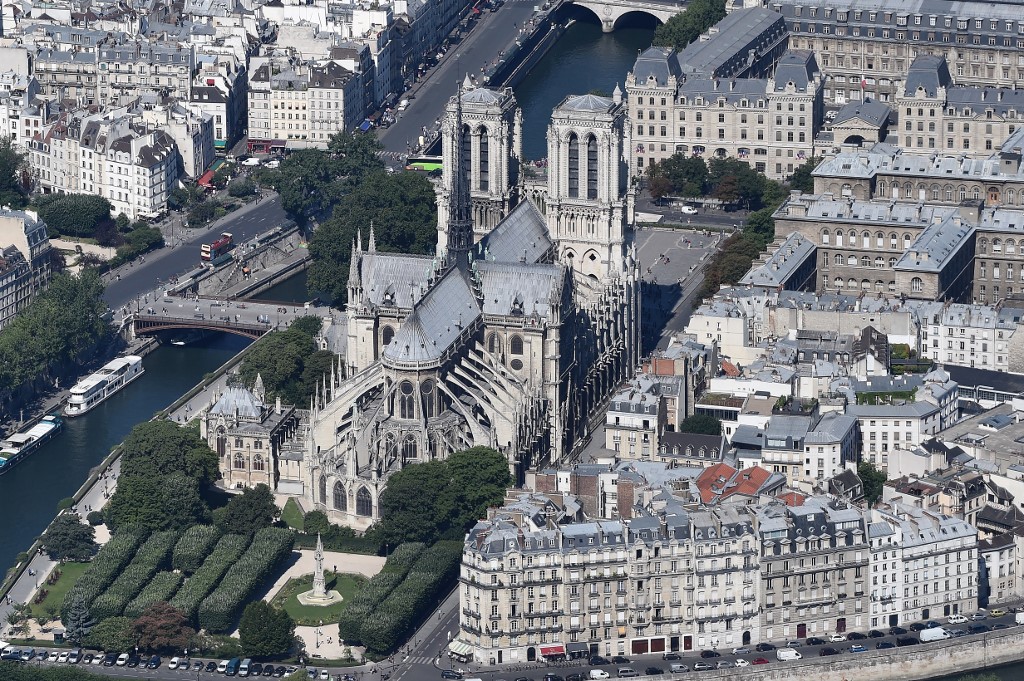 PARIS, France – Paris was struck in its very heart on Monday, April 15, as flames devoured the roof of Notre-Dame, the medieval cathedral made famous by Victor Hugo, its two massive towers flanked with gargoyles instantly recognisable even by people who have never visited the city.

Thousands of Parisians poured into the streets to watch as the fire spread, overwhelmed by the catastrophic damage to a global heritage site visited by nearly 14 million tourists and Catholic faithful each year.

The sense of loss was etched on onlookers’ faces, many wiping away tears as they contemplated the prospect that the Notre-Dame they knew might now only been seen in history books.

“It’s our history, our literature, our imagination, the place where we experienced all our greatest moments,” an emotional French President Emmanuel Macron said after a visit to the scene, vowing: “We will rebuild Notre-Dame together.”

The iconic cathedral has been deeply enmeshed in Paris’s history since construction began at the end of the 12th century – historians generally ascribe the date 1163 – and lasted more than two centuries to 1345.

It was in Notre-Dame that Napoleon Bonaparte crowned himself emperor of France.

Its massive tenor bell announced the liberation of the city from Nazi control on August 24, 1944, ending the dark years under German rule in World War II.

Twenty-six years later it hosted the funeral of Charles de Gaulle, a rare honour for the leader who steered France’s resistance during the war.

For French Catholics it has particular resonance, as the resting place of the crown of thorns believed to have been placed on Jesus’ head before his crucifixion.

In 1831, Hugo brought the cathedral alive with “Notre-Dame de Paris”, giving it a personality on par with the novel’s heroes, the hunchback Quasimodo and the gypsy beauty Esmeralda.

At a time when the church was facing the prospect of demolition because of its shocking state of disrepair, his novel worked as a rallying cry to action for the nation, which began efforts to safeguard the structure.

But Notre-Dame has not remained unchanged since its creation, with each era seeming to bring its own touch to the structure.

A spire originally installed toward the year 1250 was taken down five centuries later.

But at the end of the 19th century the architect Eugene Viollet-le-Duc, a tireless defender of France’s medieval monuments, rebuilt the spire, sparking a chorus of criticism from residents and tourists alike.

The spire had disappeared from most people’s memories when it emerged once again from Notre-Dame’s roof in 1860.

It was this spire which collapsed to gasps of disbelief from horrified onlookers shortly before 8:00 pm on Monday, consumed by the flames ravaging the roof and the wooden latice supporting it, known as the “forest”.

Experts said the framework of oak beams, invisible to visitors, was a gem of medieval architecture, with some parts of the structure more than 800 years old.

In modern times the church became a lodestone of Western culture thanks in large part to its starring role in several movies, not least the “Hunchback of Notre-Dame” of 1956.

Later generations would discover the charms of Walt Disney’s animated version of the story from 1996, while in the French-speaking world, a musical comedy of the same name by the Canadian Luc Plamondon in 1998 became a phenomenon.

“It’s the memory of Paris, the stone ship that has traversed history,” the historian Fabrice d’Almeida told France 2 television.

“The soul of the French nation is disappearing, the very heart of Paris and France were wounded today,” added Stephane Bern, a journalist who has long campaigned for the defence of the country’s cultural heritage. – Rappler.com