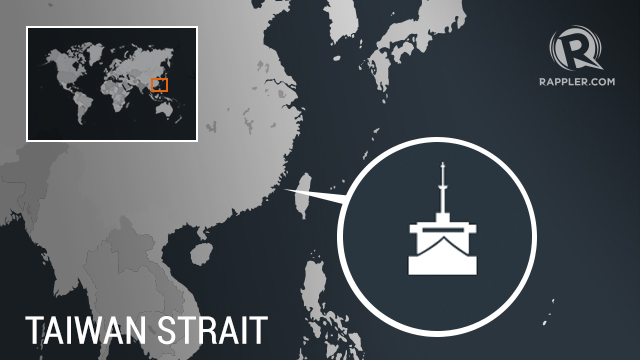 BEIJING, China – China said Thursday, April 25, its navy warned off a French warship that had entered the Taiwan Strait earlier this month and has lodged an official protest over the rare move by a European power.

Beijing sees self-governed and democratic Taiwan as its territory awaiting reunification, and the United States has traditionally been the country that defies that territorial claim by sailing through the strait.

But now it is France that has angered China.

“The Chinese military sent warships in accordance with the law, in order to identify the French ship, and warn it to sail away,” Ren said at a monthly press briefing.”

“The Chinese side has already made solemn representations to the French side.”

“The Chinese military is always on high alert and firmly defends the sovereignty and security of the country,” he added.

Ren did not identify the vessel but a French frigate, the Vendemiaire, had been expected to take part in an international naval parade commemorating the 70th anniversary of China’s navy earlier this week.

The French ship never showed up, without an explanation from either country.

Paris reaffirmed its commitment to “freedom of navigation under maritime law” following the spat with Beijing.

“The (French) national navy crosses the Taiwan Strait about once a year, without any incident nor reaction,” an aide to French Armed Forces Minister Florence Parly said after China confirmed lodging an official protest.

US warships periodically conduct “freedom of navigation” exercises in the narrow waterway separating the Chinese mainland and Taiwan, triggering angry responses from Beijing every time.

The US diplomatically recognizes China over Taiwan but remains the island’s chief military ally and arms supplier.

In February, a US destroyer and the USNS Cesar Chavez cargo ship sailed through the Taiwan Strait.

Such operations by European countries are rare in the Taiwan Strait.

Britain’s finance minister Philip Hammond was taken to task by Vice Premier Hu Chunhua during talks in Beijing on Thursday.

“It is regrettable that since August last year the relations between our two countries witnessed some fluctuations because of the South China Sea issue and a series of institutional dialogues and cooperation projects had to pause,” Hu told Hammond.

Hammond, who is in Beijing for a forum on China’s Belt and Road infrastructure project, said: “I very much share your regret that over the last few months there have been some difficulties in advancing the positive course of the relationship that our leaders have set out.”

But, he added, “of course you understand that the UK takes no position in relation to the issues in the South China Sea.”

China has not been shy about conducting military exercises in the South China Sea or Taiwan, either.

China has significantly stepped up diplomatic and military pressure on Taiwan since Beijing-skeptic President Tsai Ing-wen took office in 2016. – Rappler.com