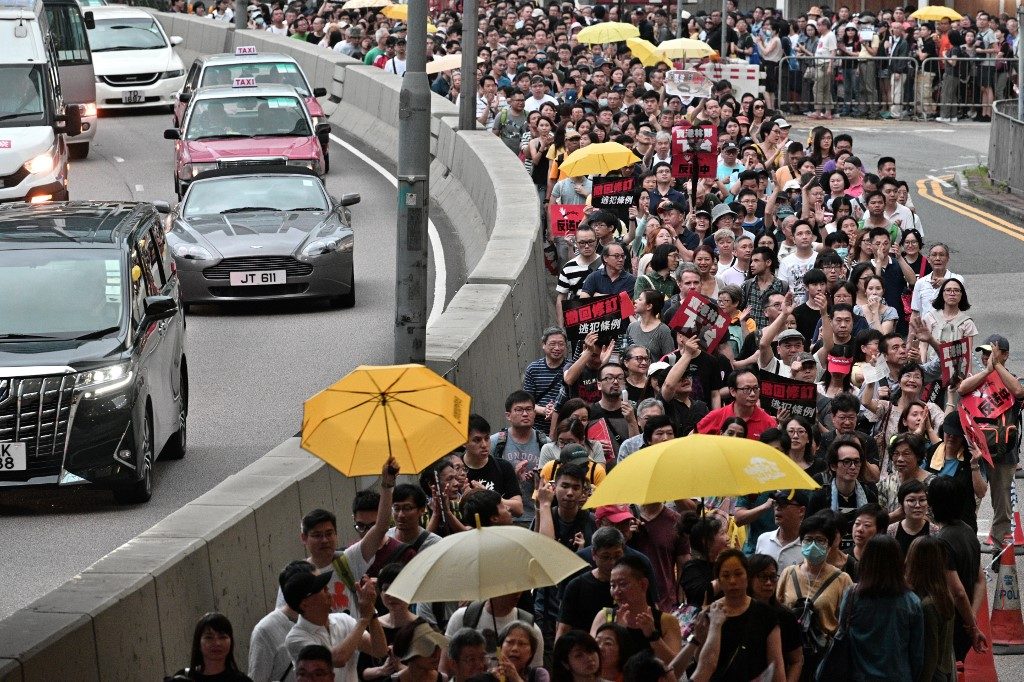 HONG KONG, China – Tens of thousands of people hit Hong Kong’s streets on Sunday, April 28, to protest against a government plan to allow extraditions to mainland China, the crowds swollen by anger over the recent jailing of democracy leaders.

The extradition proposal has already sparked large protests and mounting alarm within the city’s business and legal communities who fear it will hammer the financial hub’s international appeal and tangle people up in China’s opaque courts.

But Sunday’s protest was one of the biggest in the city in recent years.

The demonstration comes just days after 4 prominent leaders of Hong Kong’s democracy movement were jailed for their role in organizing mass pro-democracy protests in 2014 that brought parts of the city to a standstill for months.

Demonstrators on Sunday chanted “Step down, Carrie Lam!” – referring to the city’s pro-Beijing leader, while many held the yellow umbrellas that symbolized the 2014 rallies.

Fanly Leung, an accountant, told Agence France-Presse (AFP) it was “heartbreaking” to see the activists jailed earlier this week.

“They are professors, highly knowledgable people contributing to society… They could have had a comfortable life making money and not suffer like this. It’s not right to jail these good people,” said Leung, 61.

Zoe Yuen, 20, came with her mother who became politically active since the 2014 Umbrella Movement protests.

“At least we have done what we should do and can tell the next generation that although we may not get what we want, at least we have resisted,” the university student told AFP.

Some protesters dressed up as Chinese mainland police officers guarding another demonstrator standing behind a portable red cage.

One held up a sign that said: “President Xi Jinping, no legalized kidnapping of Hong Kong people to China.”

Police said some 22,000 turned out, their highest estimate since the 2014 protests. Organizers have yet to give their estimates which are usually far higher.

Hong Kong has a separate legal system through the “one country, two systems” deal struck between Britain and China.

Historically the city has baulked at mainland extraditions because of the opacity of China’s criminal justice system and its liberal use of the death penalty.

But earlier this year Hong Kong’s government announced plans to overhaul its extradition rules, allowing the transfer of fugitives with mainland China, Macau and Taiwan on a “case-basis” for the first time. (READ: Human rights in Hong Kong ‘deteriorating severely’ – Amnesty)

Chris Patten, the last British governor of Hong Kong, became the latest figure to criticize the extradition proposal ahead of Sunday’s protest.

“Societies which believe in the rule of law do not reach agreements like this with those who do not. These changes are an assault on Hong Kong’s values, stability and security,” he said.

“They create fear and uncertainty for business at a time when we should all be working to safeguard Hong Kong’s reputation as one of the world’s greatest business and financial centers,” he added. – Rappler.com