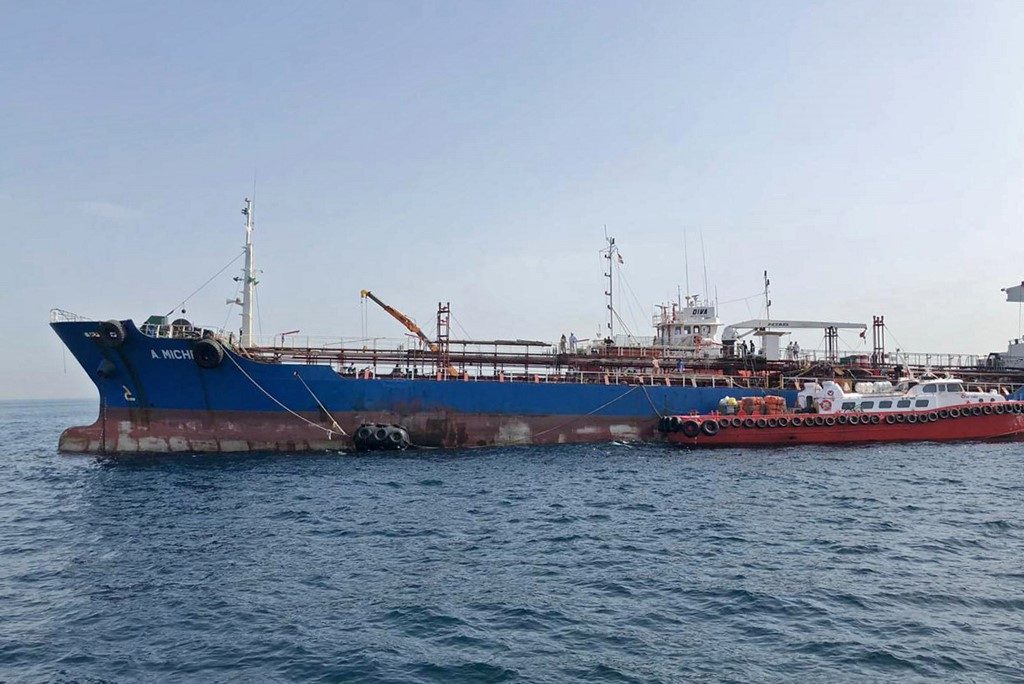 RIYADH, Saudi Arabia – Saudi Arabia, the world’s top crude exporter, said Wednesday, May 15, that attacks on two of its tankers and a major oil pipeline had targeted the security of global crude supplies.

Its close ally, the UAE, said it was “committed to de-escalation” after the spike in Gulf tensions, but warned it would retaliate hard against Yemen rebel attacks on civilian facilities in the region.

Drone attacks claimed by Iran-aligned Huthi rebels in Yemen shut down one of the kingdom’s main oil pipelines on Tuesday, May 14, two days after the mysterious sabotage of 4 ships, two of them Saudi tankers, off the UAE.

“The cabinet affirms that these acts of terrorism and sabotage… not only target the kingdom but also the security of world oil supplies and the global economy,” Riyadh said after a meeting chaired by King Salman.

The drone strikes hit two pumping stations on the kingdom’s east-west pipeline, which can carry 5 million barrels of crude per day and provides a strategic alternative route for Saudi exports if the shipping lane from the Gulf through the Strait of Hormuz is closed.

Iran has repeatedly threatened to close the vital conduit for global oil supplies in case of a military confrontation with the United States.

Yemen’s Huthis claimed responsibility for the pipeline attacks and said they were a response to “crimes” committed by Saudi Arabia and its allies, who have been battling the rebels for more than four years.

The Saudi tankers Al-Marzoqah and Amjad suffered “significant damage” in the as-yet unexplained sabotage attacks in the Sea of Oman on Sunday, May 12, Energy Minister Khalid al-Falih said, but there were no casualties or oil spills.

The Emirates has said 3 Western countries – the US, France and Norway – would be part of an investigation into the ship attacks along with the UAE and Saudi Arabia.

The ships, which also included the Norwegian tanker Andrea Victory and an Emirati vessel, were docked in the sea off the coast of the emirate of Fujairah.

Gargash said the probe would be concluded within days.

“We are very committed to de-escalation, peace and stability,” the UAE minister of state for foreign affairs, Anwar Gargash, told a press briefing in Dubai, vowing not to “jump the gun” on the investigation.

However, he blamed “Iranian behavior” for Gulf tensions.

“It is this behavior that has led to the difficult conditions,” Gargash said.

He also said that the UAE, which is part of the Saudi-led coalition battling the Iran-aligned Huthis, would “retaliate hard when we see Huthis hitting civilian targets like what happened in Saudi Arabia”.

Neither Saudi Arabia nor the UAE, both close allies of the United States, have given details on the exact nature of the ship attacks, which came amid heightened tensions between Washington and Riyadh’s arch-rival Tehran.

OPEC giant Saudi Arabia currently pumps around 10 million barrels per day, of which around 7 million are exported – mostly through the Strait of Hormuz.

On Wednesday, the United States ordered all non-emergency staff to leave its embassy in Baghdad and consulate in Arbil, northern Iraq, after accusing the Islamic republic of planning “imminent” attacks in the region.

The US has already strengthened its military presence in the region, including deploying several of strategic B-52 bombers in response to alleged Iranian threats.

President Donald Trump on Wednesday predicted that Iran would “soon” want to negotiate, denying discord in the White House over moves that critics say could lead to war.

“Different opinions are expressed and I make a decisive and final decision – it is a very simple process,” Trump tweeted. “I’m sure that Iran will want to talk soon.”

But that came after Iran’s Defense Minister Amir Hatami warned that the United States and its ally Israel would suffer the “bitter taste of defeat”.

“The proud nation of Islamic Iran will once again… pass this sensitive period of time with its head held high,” Hatami said.

A day after hosting US Secretary of State Mike Pompeo in Russia, President Vladimir Putin said Moscow was sorry to see Iran’s nuclear deal falling apart but stressed his country was not a “fire brigade” to “rescue everything”.

Earlier Wednesday, Putin’s spokesman Dmitry Peskov expressed concern that tensions over Iran escalated despite assurances from Pompeo that Washington was not seeking war.

Iran and the US have engaged in a war of words in recent weeks since Tehran began to roll back commitments set out in its landmark 2015 nuclear deal with world powers.

Trump withdrew the United States from the deal last year and has unilaterally reimposed tough sanctions on Iran.

The International Energy Agency said Wednesday that Iranian crude oil output fell in April to 2.6 million barrels per day, the lowest level in over 5 years. – Rappler.com