May 22, 2019 2:21 PM PHT
Agence France-Presse
Facebook Twitter Copy URL
Copied
(UPDATED) Dozens are arrested and parts of Jakarta are littered with debris and burned-out cars, as the violence triggers security advisories from the US and Australian embassies 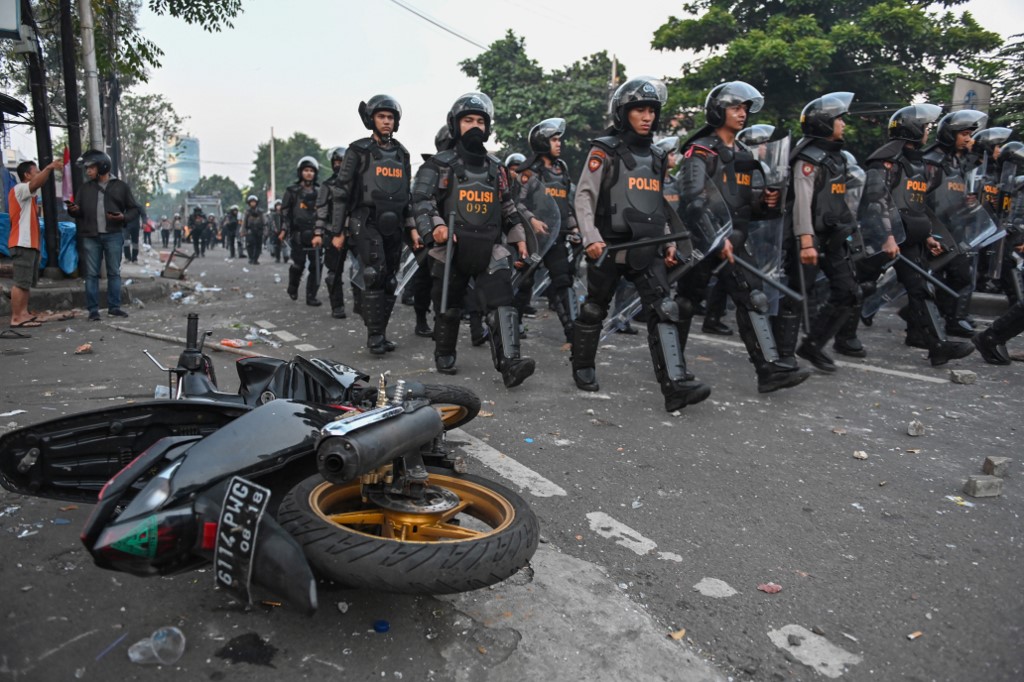 JAKARTA, Indonesia (UPDATED) – At least 6 people were killed as Indonesia’s capital erupted in violence on Wednesday, May 22, when police in riot gear clashed with protesters opposed to President Joko Widodo’s re-election.

Dozens were arrested and parts of Jakarta were littered with debris and burned-out cars, as the violence triggered security advisories from the US and Australian embassies.

Authorities also restricted access to some social media in a bid to stop the spreading of rumors and fake news.

National police chief Tito Karnavian said 6 people had died, but denied authorities had fired live rounds on the crowd and called for calm.

“Some had gunshot wounds, some had blunt force wounds but we still need to clarify this,” he told reporters.

The violence came after Indonesia’s election commission on Tuesday, May 21, confirmed Widodo, 57, had beaten retired military general Prabowo Subianto for the presidency in a poll held on April 17.

Subianto has said he would challenge the results in court, but also warned his claims of widespread cheating could spark street protests.

That was borne out Wednesday as protesters set market stalls and cars on fire while hurling fireworks and rocks at authorities who ordered them to disperse, according to an AFP reporter on the scene.

Later, roads were blocked off in parts of the sprawling metropolis – with some shopping malls, businesses and schools also closed as small groups of protesters engaged in skirmishes with police.

More than 30,000 troops had been deployed in anticipation of unrest when the official poll figures were announced.

Authorities said nearly 70 demonstrators were arrested and portrayed the violence as a planned act by “provocateurs.”

Election officials and analysts have discounted Subianto’s claims, but many supporters appeared convinced of fraud in the world’s third-biggest democracy.

“I need to support the sovereignty of the Republic of Indonesia – there has been massive fraud in this election,” Puji Astuti, a 42-year-old Subianto supporter, told AFP at a rally in central Jakarta Wednesday.

Several allies of the retired army general have been arrested recently, including a former special forces commander accused of smuggling weapons destined for the protests.

The protests in support of Subianto have sparked a backlash online from opponents with the hashtag #Tangkapprabowo (#ArrestPrabowo) trending widely on social media.

Wednesday’s early morning violence started after several thousand Subianto supporters rallied peacefully near the election supervisory agency’s office in the heart of the capital on Tuesday.

The elections commission office was barricaded with razor wire and protected by scores of security personnel.

Tensions have also spiked since police said last week that they had arrested dozens of Islamic State-linked terror suspects who had planned to cause chaos by bombing protests. – Rappler.com