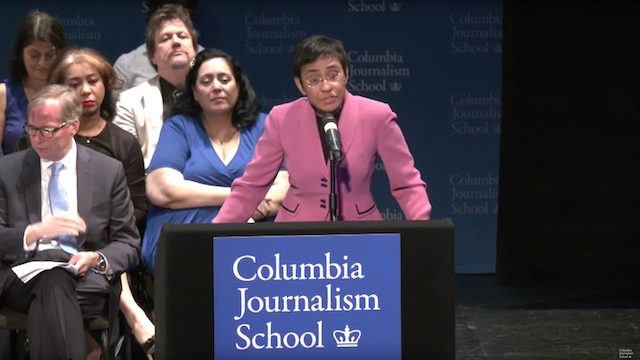 Read below for the full text of Ressa’s speech:

Thank you, Dean, faculty, parents … and CONGRATULATIONS, Class of 2019!

You’re graduating at a crucial moment in history: when journalists all around the world are under attack because we hold the line. Because we live our mission. Because – as Time Magazine wrote – we are the Guardians of Truth.

There are consequences to your choice to be here – to join us at the front lines. Let’s be clear about that. On February 13, a day before Valentine’s Day, plainclothes agents of the National Bureau of Investigation (our FBI) came to our office to arrest me.

Our young reporters at Rappler – as we drilled – immediately began live streaming the arrest on Facebook. One of the officers came up to one of our reporters and tried to intimidate her. You can hear what he said: “Be silent. Or you’re next.”

In that 5 week period, I was arrested twice. Detained once. On a bailable charge. Kept overnight to intimidate and harass me. On Valentine’s Day, my government allowed me to post bail.

In 14 months, the Philippine government filed 11 investigations and cases against me and Rappler.

I have had to post bail 8 times in about 3 months.

That’s hefty when you compare that to Imelda Marcos, who was actually convicted.

The battle for Truth … this is at the heart of protecting our democracies.

We have always known that information is power, and these times prove that.

Propaganda has always been around, but technology has enabled mass manipulation at a scale we have never imagined. At its heart is the creative destruction of our information ecosystem.

Exponential attacks online are a new weapon unleashed against journalists and activists around the world. It is personal. It is psychological. It is meant to pound you into silence.

In 2016, after a series exposing the Philippine government’s propaganda machine, I was pounded by the hour by an average of 90 hate messages. Per hour.

This is asymmetrical warfare, information operations – coming directly to your cellphone. And no news organization – no one – can protect you from that.

Since 2/3 of your graduating class are women, I have to tell you that women are particularly vulnerable – studies show they’re attacked from 3-10 times more than men, and the attacks are vicious, on how you look, how you sound, how you walk – and they quickly turning sexual.

Researcher Camille Francois coined a term for it: PATRIOTIC TROLLING – online state-sponsored hate targeting those who question power or are perceived critics.

In the Philippines, these bottom-up attacks jump to coopted newspapers, infiltrating traditional media. Then top down from the government. In situations like this, the voice with the loudest megaphone wins: Duterte, Putin, Trump.

At the heart of this creative destruction are American social media technology platforms, who have taken away the gatekeeping powers of journalists but neglected its responsibilities.

They are now the world’s largest distributor of news, allowing lies to spread faster than facts.

Laced with anger and hate, these fuel the worst of human nature, imploding democracies around the world.

It’s death by a thousand cuts.

Like an accelerant to a fire, they help elect populists and authoritarian style leaders.

In the case of the Philippines, it helps maintain the popularity of our president trumpeted exponentially on Facebook, astroturfing and creating a bandwagon effect that had an impact on our midterm elections last week.For the first time since 1938, not one opposition senator is joining the Senate.

You probably won’t become billionaires like Morehouse, I can’t pay for your student loans, but you will be leaders.

Leadership requires courage – and there are many different kinds our industry and our world needs today. Now more than ever.

Journalism is a calling – it tests you physically, mentally, spiritually.

The first type of courage, I think, is the easiest. As a warzone correspondent, courage was about going in when others were leaving and staying with the story because being there makes a difference.

It’s about being responsible for the actions and the lives of the people who follow you – and because you take that responsibility, making sure your choices go beyond your selfish interests.

Then there’s inner courage, self-control. Fighting your own anger and fears. When you’re a leader, you can’t afford to lose it.

Whether in Indonesia, East Timor, Kashmir, or Pakistan, conflict reporting requires presence of mind and clarity of thought.

You can’t do that if you’re lost in emotions or in a blame game when things go wrong.

All that is a waste of time and energy, and if you wallow in emotions, you will make the wrong decision.

Save it for later. Solve the problem first.

From something as basic as last-minute information coming in before a live shot, you absorb it, instantly organize it in your head, maintain clarity of thought for the big picture, to deliver the information in the simplest way possible when the anchor tosses to you. That’s the easy test.

A harder one is staying present tense on coverage, like the time a bomb exploded in Pakistan, and my cameraman rushed towards it.

I remembered the way the terrorists operated and pulled him back. Sure enough, a few minutes later, a second larger bomb exploded, harming those who were drawn in by the first one.

Or one of the toughest moral choices I’ve had to make – this time in East Timor. It was in the final days of the Indonesian military’s scorched earth policy, when they were killing pro-independence supporters. My team and I were leaving the capital, Dili, to head to Suai, about 4 hours away. We were about halfway there when we stopped for gas, and a source came running to our car. He asked for a ride back to Dili because he said he was being hunted. He feared for his life.

I couldn’t turn the car around because we needed to get to Suai after reports of more violence. I couldn’t bring him with us because it would take him directly to the military and make all of us vulnerable. Our first responsibility was to get the story for our global audience. So I told him we could pick him up that evening on our way back to Dili.

When we came back, an hour late, he wasn’t there … and only later would I find out he had been killed.

In situations of anarchy and war, it’s hard to distinguish right from wrong. There is only your mission, the purpose you are there.

Then there is the courage of your convictions – speaking against injustice, abuse of power, taking a position based on principles. Drawing lines you will never cross. Because on this side you’re good, and on this side, you’re evil. This is where Rappler’s #HoldTheLine came from.

The only way you will stick to the ideals you have now is if you define this now. Before you’re tested. Know your whys to figure out the what.

When I chose my home and returned to the Philippines at the end of 2004, I headed the largest news group in our country. This courage of convictions is what I needed because I wanted to change culture. It was about standing up to vested interests of power – from the owners to politicians to corporations and lobby groups. We took a zero-tolerance approach to corruption, firing anyone found guilty of accepting or soliciting a bribe. We tried to build a culture of transparency, of meritocracy – to eliminate feudal ways of management and give a level playing field. It didn’t make me popular.

Which brings me to today. In many ways, my entire career prepared me for today’s battles.

When people ask me where I find courage, I’m puzzled because I’m not doing anything differently from what I’ve always done. Yes, we have a lot more problems. A lot more attacks, and yes, being arrested is a new experience – one I could have done without … because journalism is not a crime.

All I do is put one foot in front of the other. Hold up the sky so my team can continue to work. It’s just my bad luck that the baton was passed to me at this time.

What are the two main problems you will need to solve? Well, the first, I already told you about – the battle for Truth – how geopolitical power players are using technology to manipulate facts and reality for POWER. I always joke that in the Philippines, after President Duterte announced we would pivot from the US to China and Russia in 2016 – Russia takes care of B to C using information warfare first against its citizens, then the Ukraine, and now it’s global. China is B to B: giving the Philippine government video surveillance equipment, for example.

The second is something all news groups know today: the media business model is dead. The lion’s share of digital ad spend is going to the technology platforms, the same companies that have enabled the attacks against truth and journalists.

So where do we find hope?

I find hope from Rapplers. This award belongs to them. The way our sales and research teams defined a new business model using techniques our investigative journalists used to find disinformation networks. The way they used data to fight back. The way our young reporters stand up to power and continue reporting. They are creating the future today, and they inspire me.

I find hope from the grandfather, who came up to me at the airport with his grandson, and with tears in his eyes, asked me what will happen to our country. Or the family that asked to take a photo and then hugged me as if I was a long-lost daughter, sending their support to Rappler.
I find hope from you sitting in this hall – the great Columbia class of 2019, a third of you from overseas, and 2/3 women – as you infuse your idealism into our industry. Into our mission.

Live according to the values you learned here. Do not accept the world you see today. Our information ecosystem is broken. A virus has been unleashed in our global body politique, and it is slowly killing us.

I wish you the courage to lead the way to finding a global solution – a vaccine that combines technology and journalism.
You are coming of age at a time that matters. What you do matters. What you report, and how you fight for the Truth, matters.

Our future depends on you. Congratulations again, Class of 2019. Sleep well tonight. Dream of a better future. Then go and make it happen. Go! Thank you. – Rappler.com