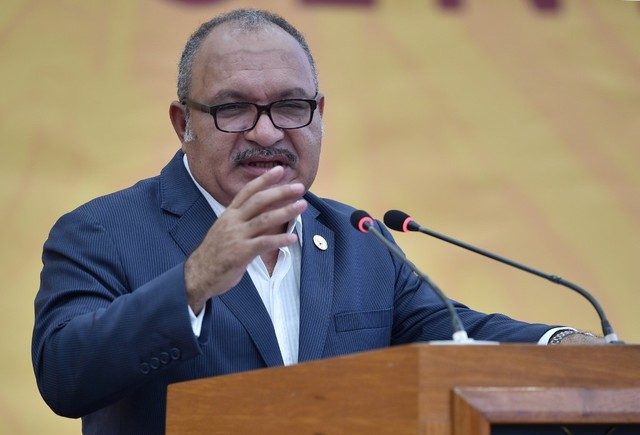 Facebook Twitter Copy URL
Copied
Peter O'Neill, who had been in power since 2011, hands over the reins to veteran politician Julius Chan, who has twice been prime minister

O’Neill, who had been in power since 2011, handed over the reins to veteran politician Julius Chan, who has twice been prime minister.

“We have agreed for a change of direction, that leadership of the government will be now handed over to Sir Julius Chan, who is a veteran leader and one of the founding fathers of our nation,” O’Neill told reporters in the capital, Port Moresby.

“We are not just going to be a caretaker government, we will work. The transformation of PNG. I don’t intend to be a lame duck. We will move this country forward,” he told reporters.

O’Neill, 54, survived a vote of no confidence earlier this month after the defections of his defense, health, and forest ministers.

His People’s National Congress Party had a small majority in parliament and he faced repeated closed-door requests from party allies to step down.

O’Neill was under pressure following the signing of a multi-billion-dollar deal for a liquefied natural gas (LNG) project with France’s Total and US firm ExxonMobil earlier this year.

But James Marape, who had led the government in parliament and was also the finance minister, resigned citing the failure of the government to ensure national firms and locals benefit from the contract.

Local communities had complained bitterly about not benefitting from similar deals in the past.

One of the companies involved in the project was Australia’s Oil Search.

Australian Prime Minister Scott Morrison said Sunday his nation had a “special relationship” with PNG, and he thanked O’Neill for being a “passionate servant” of his country.

“PNG is our closest friend and neighbour, there is just a small body of water that is between us and PNG,” he told reporters in Canberra.

“And I will look forward to working with the prime minister of PNG in the same way I have enjoyed such a strong friendship and relationship with Peter O’Neill.”

Yet it was also marred by rampant corruption, high levels of crime and large-scale investments that ran up public debt but showed little benefit for ordinary Papua New Guineans.

The country has one of the highest poverty rates in the world, and a little over one in ten Papua New Guineans have access to reliable electricity.

O’Neill was accused of micromanaging and of looking out for his own interests. – Rappler.com