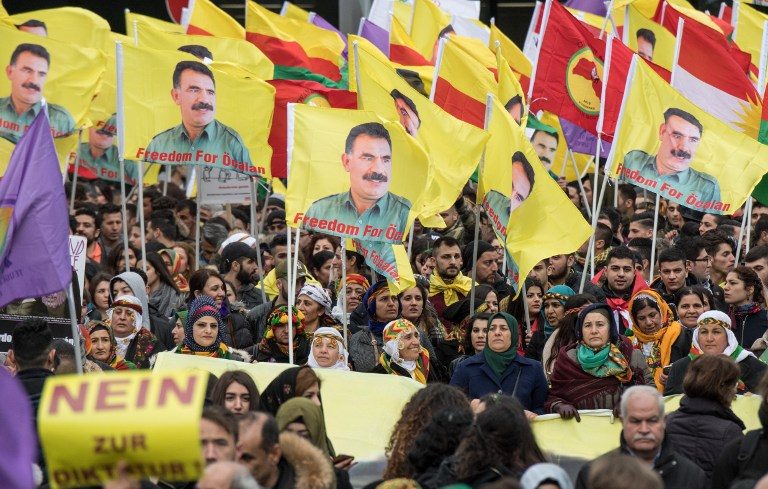 Facebook Twitter Copy URL
Copied
Some 3,000 prisoners across different prisons are on hunger strike in solidarity with one of the party's lawmakers

ANKARA, Turkey – Imprisoned Kurdish rebel leader Abdullah Ocalan has called for an end to hunger strikes by thousands of jailed supporters in Turkey protesting the conditions of his detention, his lawyers said Sunday, May 26.

Ocalan, the co-founder of the outlawed Kurdistan Workers’ Party (PKK) held on Imrali island off Istanbul since 1999, was allowed to see his lawyers this month for the first time in 8 years.

“I expect the action to come to an end in light of the broad statements to be made by my two lawyers,” Ocalan said in a message read by his lawyer Nevroz Uysal during a press conference in Istanbul.

The first visit took place on May 2. After Turkish authorities lifted an official ban on lawyers’ visits to Ocalan, a second trip by two of his lawyers was made on May 22.

His lawyers said during their visit on May 22, Ocalan said the hunger strikes “had achieved their goal” and was insistent in his call for the action to end.

“We believe the hunger strikers will end their action after this,” the lawyers added.

Some 3,000 prisoners across different prisons were on hunger strike, the pro-Kurdish Peoples’ Democratic Party (HDP) has said, in solidarity with one of the party’s lawmakers who launched the action in November.

MP Leyla Guven was in custody when she went on hunger strike to protest Ocalan’s isolation from his family and lawyers but she was later released.

Other detainees then followed suit. Eight people also killed themselves over the issue, according to the HDP.

Ocalan’s PKK, blacklisted by Ankara and its Western allies as a terror group, has been waging an insurgency against the Turkish state since 1984 during which more than 40,000 people have been killed.

Ocalan was caught in February 1999 in Kenya and jailed several months later after he was found guilty of treason, separatism and murder.

Despite the almost complete isolation, Ocalan is still a key figure of the Kurdish insurgency and the movement generally in the region.

His lawyers said Ocalan indicated he would “play a positive role” in Syria in confronting the issues there “including the Kurdish issue” if he was given the chance.

Ocalan previously said in a message following the May 2 visit that “Turkey’s sensitivities” should be taken into account in Syria, where the US-backed Kurdish YPG militia is battling the Islamic State group.

Turkey says the YPG is a “terrorist offshoot” of the PKK.

The visits come just weeks before a controversial re-run of the Istanbul mayoral election, which was lost by the ruling party of President Recep Tayyip Erdogan on March 31.

Experts say Kurdish votes played a significant role in Erdogan’s party loss and now he is hoping for their support again in the repeat vote on June 23.

But Turkish Justice Minister Abdulhamit Gul said Friday the lawyers’ visits “had nothing to do with a peace process” and “no link to the Istanbul elections”.

Ocalan had called for a ceasefire in 2013 to allow peace talks a chance to reach a negotiated settlement.

However, fighting between Turkey and the PKK intensified after the collapse of the ceasefire in the summer of 2015, dashing hopes of a peaceful solution to the conflict.

Ocalan’s lawyers also said the rebel chief said the permission given for these meetings “did not mean the existence of a negotiation process”.

But he said Turkey was in need of discussions regarding democracy and peace. – Rappler.com