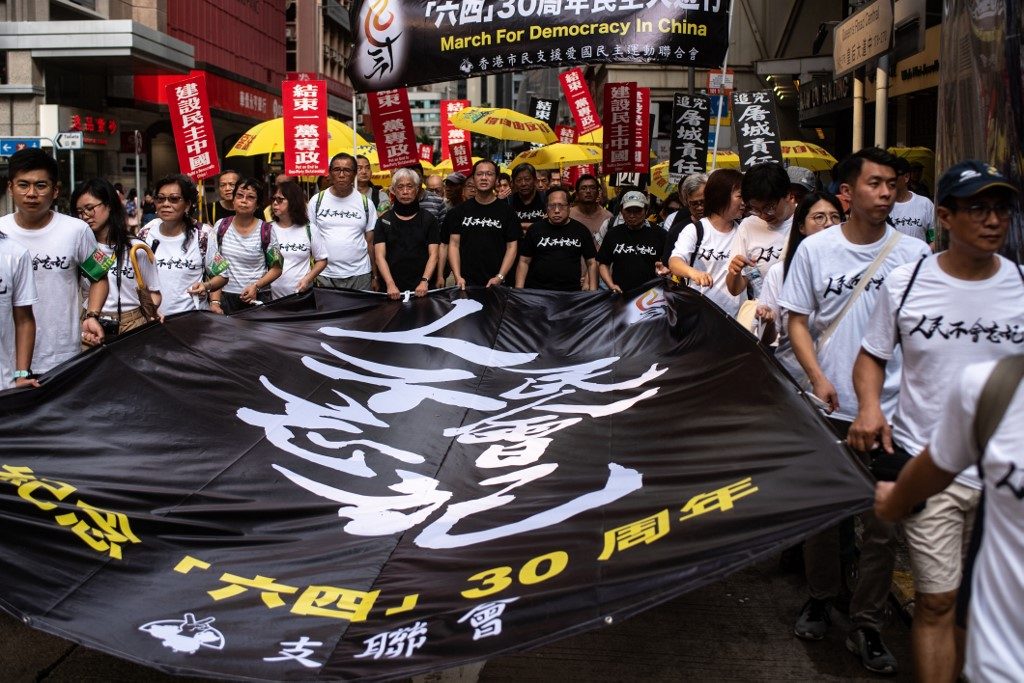 Facebook Twitter Copy URL
Copied
Discussions of the 1989 pro-democracy protests and its military suppression are taboo in China, and authorities have rounded up or warned activists, lawyers and journalists ahead of the anniversary each year

Discussions of the 1989 pro-democracy protests and its military suppression are taboo in China, and authorities have rounded up or warned activists, lawyers and journalists ahead of the anniversary each year.

Internet censors also usually work on overdrive, and this year popular livestreaming sites are shutting down around the anniversary for “technical” reasons.

But this year’s attempts to mute public discourse are harsher than usual, said Cao Yaxue, founder of the Washington-based rights group China Change, because Beijing has become increasingly intolerant of dissenting voices.

Among the string of activists detained or “disappeared” are 6 artists who had put up a painting and performing art exhibition titled “A Conscience Movement” in the eastern city of Nanjing.

Liu Lijiao – the wife of the lead artist Zhu Hun – told AFP that she has been unable to contact her husband since Tuesday evening, May 28.

“Police came from Nanjing and raided my home in Beijing yesterday (Wednesday),” she said. The two cities are over 1,000 kilometers (600 miles) apart.

Zhu Hun was also detained in 2014, for a performance art piece in support of democracy protests in Hong Kong against China’s attempts to restrain freedoms in the semi-autonomous city.

Dissident writer Shen Liangqing was arrested for “picking quarrels” on May 16 and is being held in a detention centre in Hefei, the provincial capital of Anhui, Shen’s lawyer Liu Hao said.

“A group of unknown men grabbed Shen while he was walking his dog the night before, and put a black hood over his head, as if it was a kidnap attempt, but later the group showed their police IDs,” Liu Hao said.

Shen had been campaigning for democratic reforms for over 3 decades and served an 18-month jail term in 1992 for “inciting subversion”.

Rights group China Human Rights Defenders (CHRD) said they have documented the cases of three other individuals who were detained in May for posting photos or comments linked to the Tiananmen crackdown.

They include independent filmmaker Deng Chuanbin, who tweeted a photo of a liquor label that showed an illustrated rendition of “Tank Man”, the iconic photograph of a man facing down a column of armoured vehicles in 1989.

Deng was arrested on May 17 and police warned his family not to hire a lawyer, the rights group said in a statement.

The Chinese Communist Party has adopted a heavy-handed approach to dealing with student activists, labour movements and rights lawyers in recent years and since President Xi Jinping took its reins.

Asked if the People’s Liberation Army planned any commemoration on June 4, defense ministry spokesman Wu Qian told reporters Thursday: “I do not agree with you for using the word ‘suppression’. I think these past 30 years, the stable process of China’s reform and development and the achievements that have been made are an answer to this question.”

Huya and YY – two popular livestreaming sites with millions of viewers – have announced they will temporarily shut down live streams for “technical updates” ahead of the sensitive date and until June 6 and 7 respectively.

Nasdaq-listed Bilibili, a video streaming platform popular among young anime, comic and gaming fans in China, has blocked live commentary on its videos from May 29 until June 6.

All language versions of Wikipedia – whose pages include details about the Tiananmen crackdown – were blocked from the Chinese internet weeks ago.

“Officials want to press mute on everything and everyone, they want young people to forget,” said an avid gamer who shares mobile gaming tutorials on Bilibili. “But there’s always a way to dig up the past.” – Rappler.com