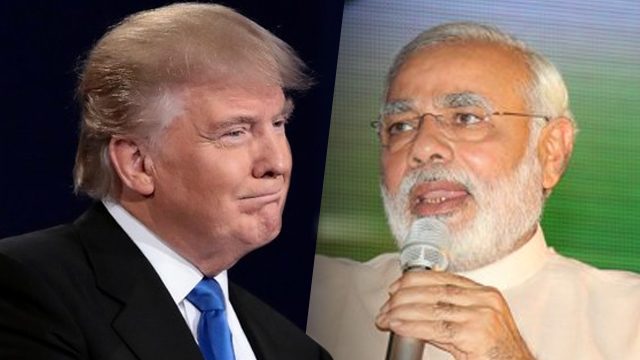 Facebook Twitter Copy URL
Copied
The United States had a $26.7 billion trade deficit with India from 2017 to 2018

WASHINGTON, United States – The United States will end preferential trade treatment for India from Wednesday, June 5, US President Donald Trump has announced, in a fresh economic headwind for New Delhi alongside slowing growth and record unemployment.

India has been the single biggest beneficiary of the decades-old US Generalized System of Preferences program, allowing the country to export $5.7 billion worth of duty-free goods in 2017, according to figures from US Congress.

Trump said in a statement issued late Friday that he wanted greater access for US goods to the giant South Asian nation.

“I have determined that India has not assured the United States that India will provide equitable and reasonable access to its markets,” Trump said.

“Accordingly, it is appropriate to terminate India’s designation as a beneficiary developing country.”

Washington has sought to make India a closer diplomatic ally, but has long complained about limited access to the huge market of 1.3 billion people.

The announcement is the latest headwind to threaten the Hindu nationalist government led by Prime Minister Narendra Modi, who was re-elected to his second term in a landslide just weeks ago after campaigning partly on his record as an economic reformer.

Official figures released Friday showed that India’s growth slowed for the third straight quarter to 5.8% in January-March, while unemployment hit a 45-year high in 2018.

The Indian government made no immediate comment on Washington’s move, but media reports said New Delhi was considering higher import duties on more than 20 US goods including agricultural produce and chemicals.

Indian commerce secretary Anup Wadahan played down the move to end the country’s GSP status in March, saying that preferential trade accounted for a fraction of its nearly $80 million in annual exports to the US. – Rappler.com