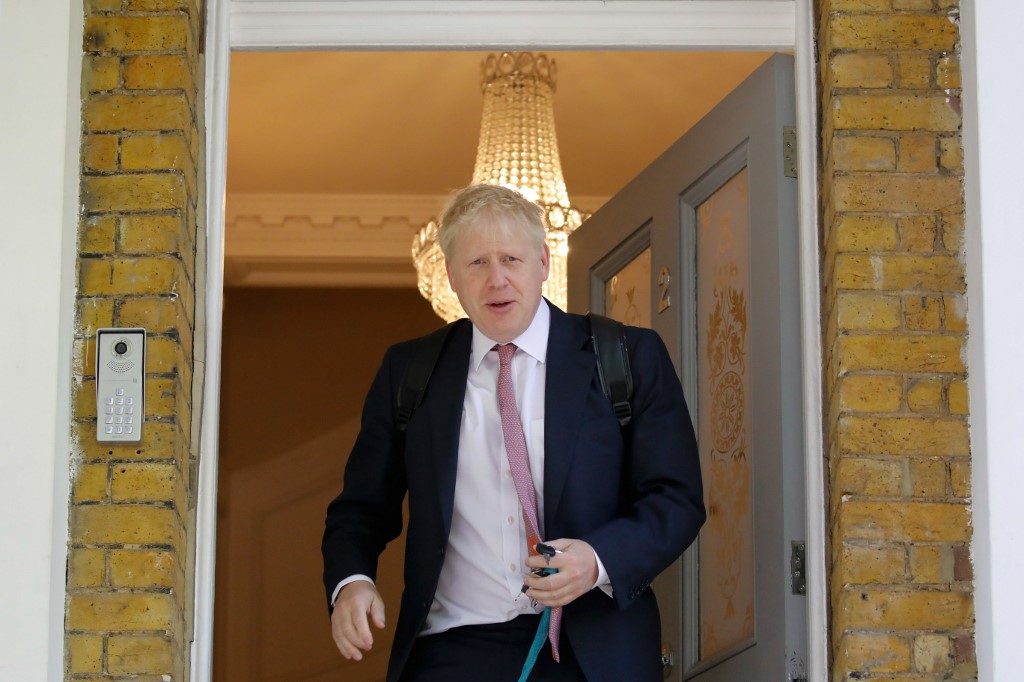 Facebook Twitter Copy URL
Copied
The launch video follows Boris Johnson on the campaign trail, promising voters that he will take Britain out of the European Union on October 31 'deal or no deal' if he becomes prime minister

LONDON, United Kingdom – Boris Johnson, the frontrunner to replace Theresa May as Britain’s prime minister, launched his digital campaign to become the Conservative Party leader on Monday, June 3, coinciding with the visit of “friend” Donald Trump.

The launch video follows Johnson on the campaign trail, promising voters that he will take Britain out of the European Union on October 31 “deal or no deal” if he becomes prime minister by being elected Tory leader.

The former foreign secretary is popular among the grassroots Tory members, but they will only get a vote once the party’s MPs have whittled down the ever-growing candidates list to a final two.

He is less popular among his own MPs, due to his key role in campaigning for Brexit and for his gaffe-prone style, and failed to make the last two when he last ran for the job in 2016.

US President Trump, who kicked off a state visit to Britain on Monday, gave Johnson his backing on Saturday, June 1.

“I know the different players. But I think Boris would do a very good job. I think he would be excellent. I like him. I have always liked him.”

The comments drew criticism in Britain for interfering in the country’s political process.

Elsewhere in his campaign video, Johnson expressed support for increased education and police funding and said he would “unite” a country fractured by Brexit.

“We have got to have the courage to tell the people of this country we can do it, if we want to,” he told one voter on the doorstep.

Johnson has long held ambitions to become prime minister, but pulled out of the race in 2016 after key ally and fellow Brexit campaigner Michael Gove withdrew his support, saying “Boris cannot provide the leadership or build the team for the task ahead.”

His latest bid got off to a rocky start when he received a court summons last week over allegations that he knowingly lied during the Brexit referendum campaign.

Thirteen candidates have entered the race so far, with Gove, Johnson and foreign minister Jeremy Hunt currently receiving the most backing from MPs. – Rappler.com