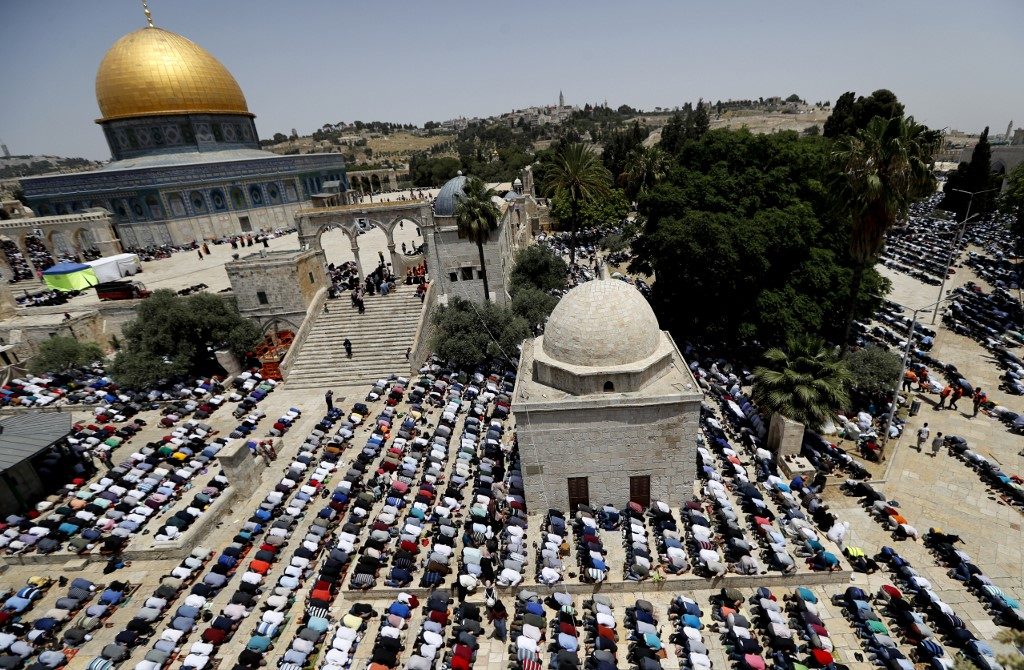 Facebook Twitter Copy URL
Copied
Some are questioning why Palestinian Eid festivities fall on a different day to Saudi Arabia for the first time since at least 1994. The official reason is due to differences in the sighting of the moon.

GAZA CITY, Palestinian Territories – The Palestinians will begin the Eid festivities on a different day to Saudi Arabia for the first time since at least 1994 due to differences in the sighting of the moon, leading some to question why.

Some Palestinians even suggested on social media the decision could be related to politics ahead of the unveiling of the US plan for Israeli-Palestinian peace.

Palestinian officials flatly denied the claim related to the Eid al-Fitr festival that follows the end of the fasting month of Ramadan.

Others joked about the different dates, with one social media comment proposing Palestinians fast for a half-day on Tuesday to bridge the division.

A statement by the Grand Mufti of Jerusalem and the Palestinian territories carried on official media Monday night, June 3, confirmed Eid al-Fitr would begin on Wednesday, June 5, a day later than Saudi Arabia.

The end of Ramadan is based on the new moon but regional rivals Saudi Arabia and Iran have long tended to pick different days.

This year Eid is on Tuesday, June 4, in Saudi Arabia and Wednesday in Iran.

Ekrama Sabri, head of the supreme Islamic Council in Jerusalem, told AFP it was the first time since the Palestinian Authority was formed in 1994 they were holding Eid on a different day to Saudi Arabia.

“We in Palestine do not have tools like those in Saudi Arabia and the geography of our country does not help to see the moon,” he said, explaining the difference.

He denied any political issues, pointing out that Egypt, a close Saudi ally, was also due to begin on Wednesday.

A Palestinian Islamist group refused to accept the mufti’s decision, announcing they would consider Eid to begin Tuesday.

The decision in any case set off suspicions.

The Palestinians have been seeking to block the US peace plan, accusing Trump of blatant pro-Israel bias.

Saudi Arabia is attending a US-led economic conference in Bahrain on the issue on June 25-26 which the Palestinians are boycotting and have encouraged other Arab states to skip.

Some Palestinians speculated online that the decision was a message.

Ali Mawazi posted on Facebook his support for the decision, saying that those who opposed it were “wrong, specifically in the atmosphere of the so-called deal of the century,” a nickname used by Palestinians for the US peace push. – Rappler.com