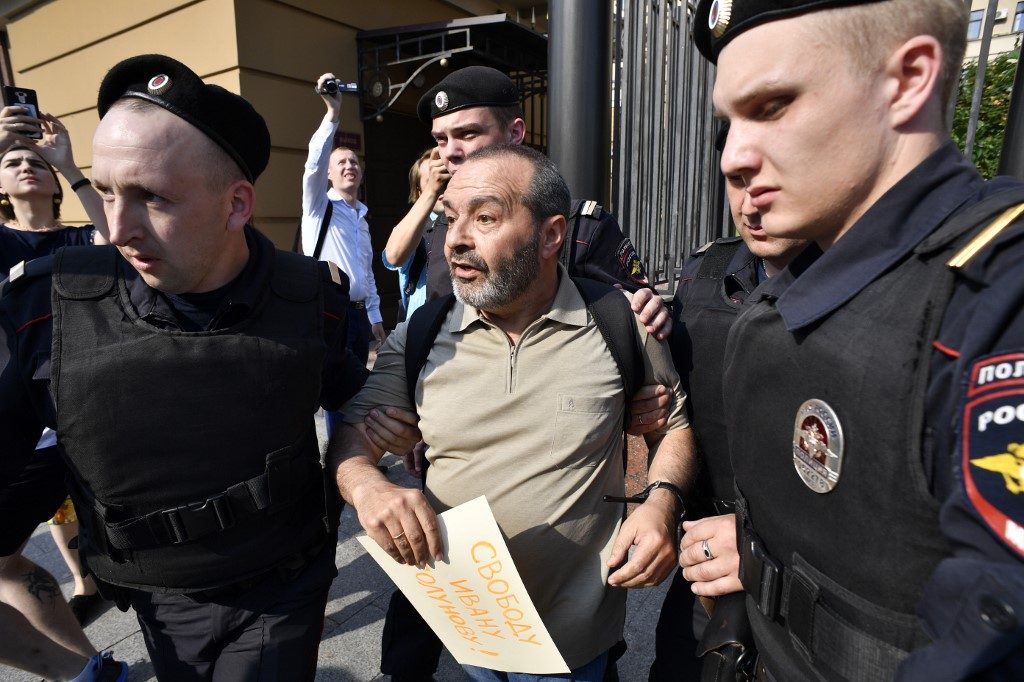 MOSCOW, Russia – Russia has detained an investigative journalist for drugs offenses, triggering protests on Friday, June 7, with supporters claiming the charges were trumped-up and a punishment for his reporting.

Meduza, an independent Russian-language media outlet, said that one of its reporters, Ivan Golunov, was detained in central Moscow on Thursday and police have opened a probe into allegations that he manufactured and dealt drugs.

A police spokesman did not name the suspect, but said a 36-year-old man had been detained with 5 packages of mephedrone, a designer drug.

Golunov’s supporters claimed the drugs had been planted on him.

The journalist faces a possible jail sentence of between 10 and 20 years, if convicted, according to Meduza editor-in-chief Ivan Kolpakov.

“We have reasons to believe that Golunov is being persecuted for his journalistic work,” Kolpakov and Meduza’s general director, Galina Timchenko, said in a statement.

In his work, Golunov investigated everything from Russia’s shady funeral industry to corruption in Moscow city hall.

Reporters Without Borders warned Golunov’s arrest could mark “a significant escalation in the persecution” of independent journalists in Russia.

A crowd of least 100 people – including many journalists – protested in front of Moscow’s police headquarters on Friday, brandishing placards that read: “Freedom to Ivan Golunov” and “I am a journalist. Arrest me, too.”

They staged so-called one-person pickets – the only form of protest that does not require the pior approval from the authorities in Russia.

“I believe this is a disgusting, trumped-up case,” said journalist Anna Narinskaya, who was also among those who were briefly detained.

“This is revenge for Ivan Golunov’s investigations.”

According to Meduza, Golunov had received threats in recent months.

The EU’s delegation to Russia and the Organization for Security and Co-operation in Europe expressed concern over the arrest.

On Saturday, a Moscow court is set to determine whether to extend Golunov’s detention or set him free.

During his two decades in power, Putin has silenced most of his critics and muzzled the media.

The Meduza website is based in EU member Latvia to circumvent censorship from Moscow, but some of its journalists live in Russia.

“Everything indicates that the authorities are planting drugs on their targets to shut them up with a jail sentence,” said Natalia Zvyagina, director of Amnesty International’s branch in Russia.

“There are a lot of facts signaling that the drugs have been planted,” the lawyer told Agence France-Presse.

He said Golunov had been beaten while in detention and pointed to numerous violations, including a refusal by investigators to take swabs of Golunov’s fingernails and backpack to check whether he personally handled drugs.

Alexander Baunov of the Carnegie Moscow Center described Golunov as a close friend who did not take stimulants because he did not like an “altered state of mind.”

Johann Bihr, the head of the Reporters Without Borders Eastern Europe and Central Asia desk, described the police’s behavior as “highly suspicious.”

“We believe that Ivan Golunov has become a target of a crude and ludicrous provocation,” it said. – Rappler.com