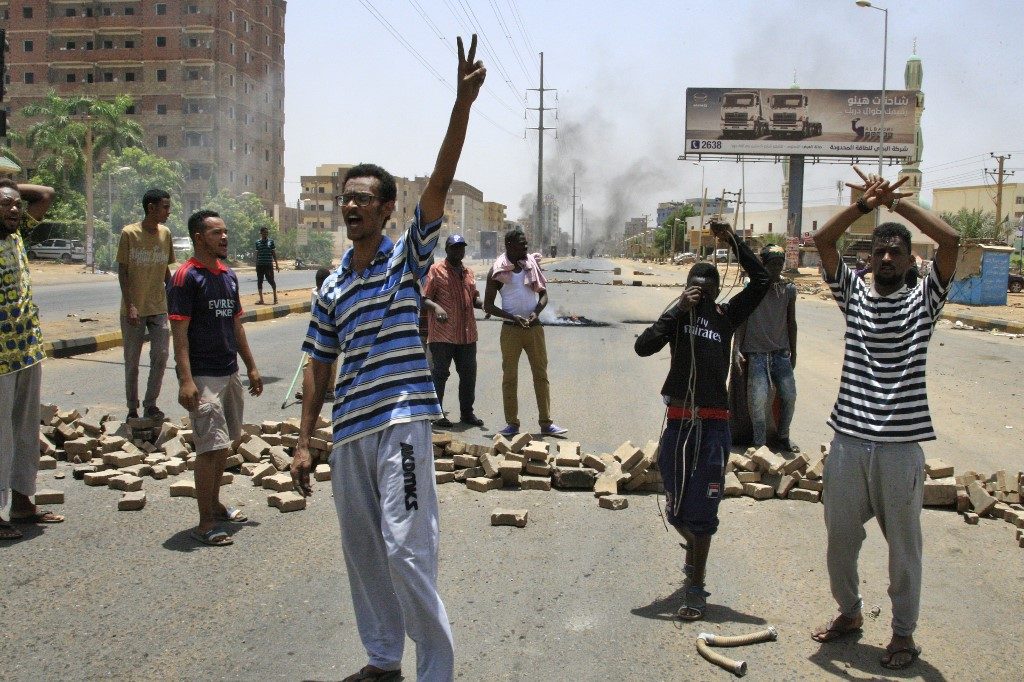 The men were arrested after they held meetings on Friday with Ethiopian Prime Minister Abiy Ahmed, who was in Khartoum on a mission to revive talks between Sudan’s ruling generals and protest leaders on who should lead the country’s next governing body — a civilian or a soldier.

It comes just days after Monday’s crackdown by men in military fatigues on a weeks-long sit-in that left dozens of demonstrators dead.

Witnesses say the assault was led by the feared Rapid Support Forces (RSF) who have their origins in the notorious Janjaweed militia unleashed in the conflict in the western region of Darfur in 2003 and 2004.

The generals seized power in April after they ousted longtime dictator Omar al-Bashir on the back of months-long protests against his three-decade rule.

Since then they have resisted calls from protesters and Western nations to transfer power to a civilian administration and several rounds of talks with the demonstrators finally broke down in mid-May.

In a bid to revive the negotiations, the Ethiopian premier flew to Khartoum on Friday on a reconciliation mission and held separate meetings with the two sides.

“The army, the people and political forces have to act with courage and responsibility by taking quick steps towards a democratic and consensual transitional period,” Abiy said in a statement after the meetings.

“The army has to protect the security of the country and its people and political forces have to think about the future of the country.”

Call for international probe
Two prominent rebels and an opposition leader were, however, arrested soon after they met Abiy as part of a delegation representing the protest movement, aides said on Saturday.

Opposition politician Mohamed Esmat was seized on Friday while a leader of the rebel Sudan People’s Liberation Movement-North (SPLM-N), Ismail Jalab, was taken from his home early on Saturday.

“A group of armed men came in vehicles at 3:00 am (1:00 GMT) and took away Ismail Jalab… without giving any reason,” one of his aides, Rashid Anwar, told Agence France–Presse (AFP).

“We don’t know where they are being held,” he added.

Esmat and Jalab are both leading members of the Alliance for Freedom and Change, which brings together opposition parties and some rebel groups with the organizers of the mass protests which have gripped Sudan since December.

Their arrest threatens to further complicate efforts to reconcile the protest movement and the generals.

Following Monday’s brutal crackdown, chances of a quick democratic transition appear remote as protest leaders now insist that talks with the generals could resume only if they meet certain conditions.

“The Transitional Military Council has to admit the crime it committed,” Omar al-Digeir, a prominent protest leader told reporters on Friday after meeting Abiy.

He said all “military elements should also be removed from the streets across the country” and called for an international probe into “the massacre at the sit-in”.

Digeir said the military council should also restore access to the internet and allow public and media freedoms.

“In diplomacy, dialogue is everything and pre-conditions for dialogue are generally not a good idea. But after what happened on 3 June, these … conditions for returning to talks seem eminently reasonable,” Britain’s ambassador to Khartoum Irfan Siddiq wrote on Twitter.

Deserted streets
Since the crackdown, the streets of Khartoum have been deserted with residents cowering indoors, particularly after the leader of the RSF paramilitaries Mohamed Hamdan Degalo warned he would not tolerate “any chaos”.

On Saturday several roads were still blocked by barricades made of rocks, tree trunks and tires put up by protesters after the crackdown, witnesses said.

“The RSF is present in some squares and streets but not prominently,” a witness said.

The protest site outside army headquarters where thousands rallied for weeks was however out of bounds, with troops and RSF paramilitaries surrounding it from all sides to keep demonstrators at bay.

Protest slogans — “freedom, peace, justice” and “civilian rule, civilian rule” — which once rang out across Khartoum are nowhere to be heard.

The repression of the protest movement “aims to psychologically break the population of Khartoum” Sudan expert Marc Lavergne of the French National Centre for Scientific Research told AFP this week.

“The people (demonstrating) in the streets all have an education, aspirations of democracy, of human rights, freedom.” – Rappler.com