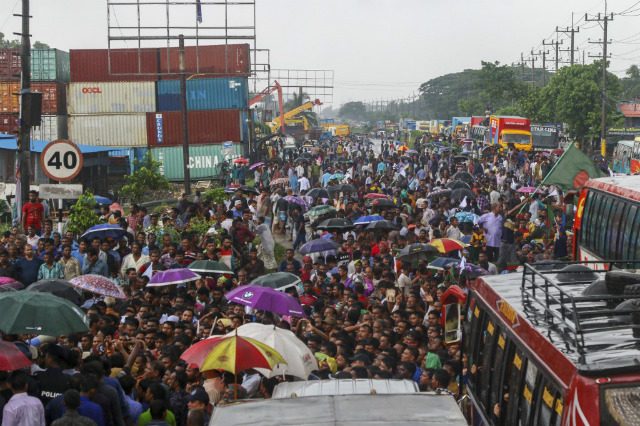 The fishermen say the 65-day blockade – intended to replenish fish stocks – is driving them out of business.

Their one-hour protest at the coastal town of Sitakunda caused several kilometers of tailbacks on the main road linking the capital, Dhaka, to the second city of Chittagong.

Local police chief Suman Banik said the demonstration by 3,000 fishermen and their families was peaceful “but it caused a huge traffic jam on this busy highway”.

The demonstrators only cleared the road after a government administrator and a local member of parliament promised to help.

The fishing ban runs from May 20 to July 23 and navy and coast guard vessels are patrolling the zone to prevent breaches.

Bangladesh frequently bans deep sea fishing and catches in coastal rivers to help stocks, but this is the longest imposed for seas near the coast and fishing communities are furious.

About 15 million people in the region directly or indirectly depend on Bangladesh’s multi-billion dollar fishing industry.

Shyamol Palit, an organizer of the demonstration, said the ban has hit poor fishermen hard, especially the Hindu Joldas community.

More than 55,000 Joldas families live in the Chittagong region and are employed in coastal fishing mainly running their own small boats.

“The Joldas have taken loans to sail boats this season. This sudden and long embargo has put them in a debt trap,” he said.

The government has announced it will provide free rice for nearly half a million families of badly-affected fishermen.

But Palit said the scheme is not wide enough and “you cannot run a family only with a sack of rice.”

The ban has also hit the nearly one million Rohingya refugees who live in camps in Bangladesh after fleeing violence in Myanmar’s Rakhine state in recent years.

The refugees are not officially allowed to work outside the camps, but thousands are secretly employed on trawlers owned by Bangladeshis. – Rappler.com