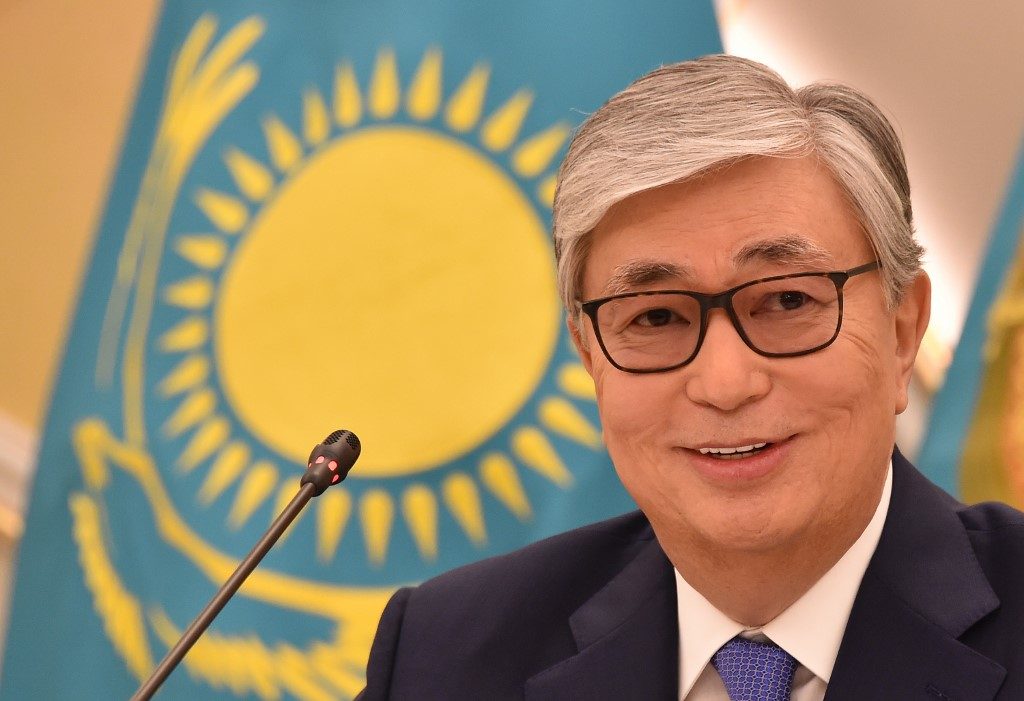 Facebook Twitter Copy URL
Copied
No vote in Kazakhstan has ever been recognized as fully democratic by the Organization for Security and Co-operation in Europe, which sent more than 300 observers to monitor this election

NUR-SULTAN, Kazakhstan – The handpicked successor of Kazakhstan’s longtime ruler won a sweeping victory in a presidential election, but the vote was marred by a police crackdown and monitors said Monday, June 10, it showed “scant respect” for democracy.

Kassym-Jomart Tokayev took 70.8% of the vote in the election on Sunday, June 9, the Central Election Commission said, well ahead of his nearest rival, opposition candidate Amirzhan Kosanov on 16.2%.

Sunday saw hundreds of arrests after the biggest protests in Kazakhstan in at least 3 years, as demonstrators urged a boycott of what they said was a fixed election.

“A lack of regard for fundamental rights, including detentions of peaceful protesters, and widespread voting irregularities on election day, showed scant respect for democratic standards,” observers from the Organization for Security and Co-operation in Europe (OSCE) said.

Tokayev’s victory was never in doubt after he received the blessing of former president Nursultan Nazarbayev, who led the Central Asian nation for 3 decades before his shock resignation in March.

An Agence France-Presse (AFP) correspondent saw scores more arrested on Monday, several of whom did not appear to be attempting to protest.

Activists denounced the arrests and made claims of ballot stuffing, but Tokayev insisted the election had been “a competition.”

“This shows that our level of political culture has seriously increased. There is much work ahead,” he said in comments broadcast Monday on state television.

Authorities said they would investigate all allegations of vote violations.

No vote in Kazakhstan has ever been recognized as fully democratic by the OSCE, which sent more than 300 observers to monitor this election.

Tokayev’s opponents were quick to congratulate him on victory, including second-place finisher Kosanov, a journalist who presented himself as the ballot’s sole opposition candidate.

“This political transition will take place with the participation of the people,” Kosanov said, criticizing “foreign-based” opposition figures who had encouraged voters to boycott the poll.

“People are ready for an equal dialogue with authorities,” he said in an interview shown on state television.

Kosanov had previously said that if the count was fair the result would go to a second round.

Third place was claimed by Daniya Yespayeva, the first woman candidate in a Kazakh presidential election, who scored 5.2% of the ballot according to the CEC.

Despite a relatively high turnout of 77% announced by the CEC, many citizens in Nur-Sultan and Almaty told AFP that they had not voted.

Aigul Eskarayeva, a 60-year-old pensioner in the capital Nur-Sultan – renamed after Nazarbayev following his resignation – said she had not taken part as she thought voting in Kazakh elections was “pointless.”

“But I enjoyed the opportunity to use public transport for free all Sunday,” she told AFP on Monday.

Several hundred rallied in Almaty before police moved in to detain protesters.

Journalists, including two from AFP and reporters for Radio Free Europe/Radio Liberty, were among those detained in Almaty but were later released.

Among the dozens more detained on Monday was Assem Zhapisheva, a civic activist and journalist. AFP could not reach Zhapisheva for comment after her detention.

Marzhan Aspandiyarova, a civic activist who visited police stations in Almaty on Sunday and Monday, said trials were already underway to convict and sentence protesters.

“Relatives are trying to get more information but it is difficult because the detained had their telephones confiscated.”

Nazarbayev’s announcement in March that he was stepping down from the presidency and naming Tokayev interim leader shocked Kazakhs, who had lived under his rule since Soviet times.

But the 78-year-old, who turned the country of 18 million people into an energy powerhouse while governing with little tolerance for opposition, is still expected to call the shots from behind the scenes. – Rappler.com