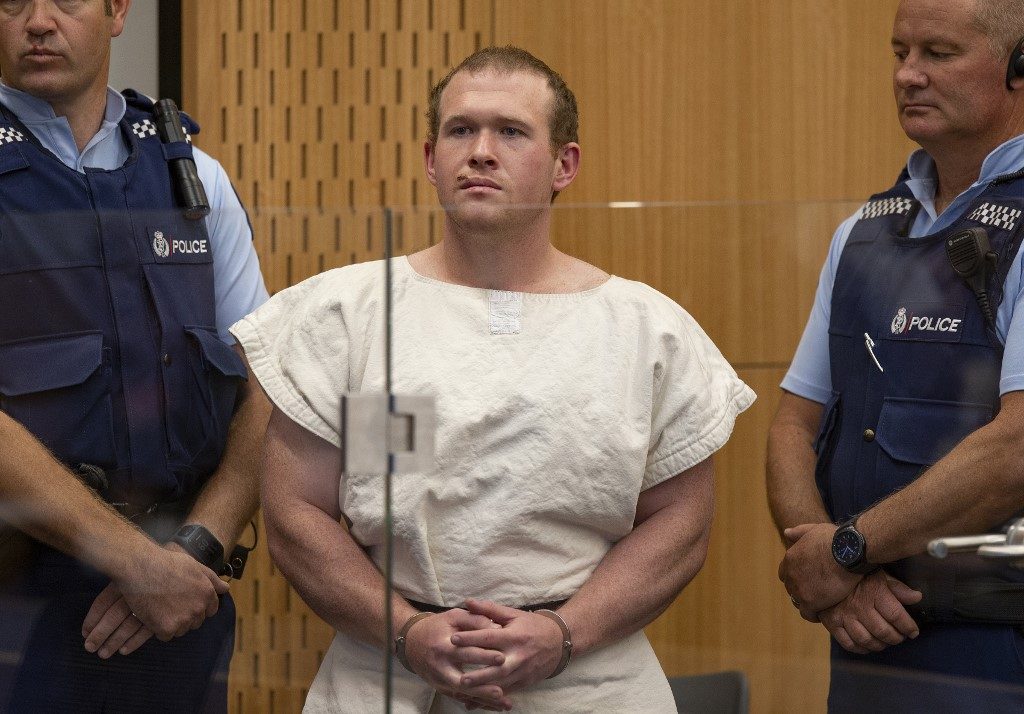 Facebook Twitter Copy URL
Copied
Tarrant, a 28-year-old Australian national, is committed to stand trial next year on 51 counts of murder, 40 of attempted murder and engaging in a terrorist act

CHRISTCHURCH, New Zealand – The man accused of shooting dead 51 Muslim worshippers in the Christchurch mosque attacks in March smiled on Friday, June 14, as his lawyers entered not guilty pleas to multiple murder and terrorism charges.

Brenton Tarrant’s barrister told Christchurch High Court his client was pleading not guilty to all charges, prompting anger from survivors and relatives of those killed in the March 15 attacks.

The self-proclaimed white supremacist appeared in court via audio-visual link from a maximum-security prison in Auckland for the brief hearing.

Tarrant, a 28-year-old Australian national, was committed to stand trial next year on 51 counts of murder, 40 of attempted murder and engaging in a terrorist act.

His smiling demeanor enraged survivors still reeling from the worst massacre in modern New Zealand history, who had packed the courthouse’s public gallery for a glimpse of the accused.

“It just shows he’s an animal,” Mustafa Boztas, who was wounded in the thigh, told AFP outside the court.

“I feel sad that someone can be so unhuman and take the lives of innocent people.”

Abdul Aziz, who confronted the gunman at the Linwood mosque and chased him off the premises, said he wanted to see Tarrant’s face.

“He was laughing there (in court) and he thinks he was so tough, but he was a coward when he faced me and he ran,” he said.

“He was not man enough to stand up that time and (now) he’s standing there and laughing.

“Put me for 15 minutes in one cell and then we will see if he can laugh any more.”

Tarrant allegedly opened fire in the packed Al Noor mosque during Friday prayers, then travelled across town to continue the carnage in the suburban Linwood mosque, while livestreaming his actions on social media.

The court heard that mental health assessments had found Tarrant was fit to stand trial.

“No issue arises regarding the defendant’s fitness to plead, to instruct counsel, and to stand his trial. A fitness hearing is not required,” Judge Cameron Mander said in a statement shortly after the hearing.

The judge set a trial date of May 4, 2020, with proceedings expected to last at least six weeks, although some lawyers warned the case – sure to be one of the biggest-ever in New Zealand – could go twice as long.

“The court endeavours to bring serious criminal cases to trial within a year of arrest. The scale and complexity of this case makes this challenging,” Mander said.

Didar Hossain, whose uncle and friends were killed in the attack, was disappointed the justice system was taking so long to deal with the case.

“It should be finished in six months, that would be good for us. We are not happy,” he said.

Tarrant was remanded in custody to appear for a case review hearing to be held on August 15.

Mander barred news outlets from taking photographs or video of Tarrant’s latest court appearance, although he said images from an earlier hearing could be used.

He also lifted suppression orders on the names of those who were wounded in the attacks, except for those aged under 18.

Boztas, who spent more than a month in hospital receiving treatment for his wounded leg, vowed the hatred that inspired the attacks would not prevail.

“Justice will be served and we will rise from this and transform anger into love,” he said. – Rappler.com